Prepare For Change
Home ARCONTES You Can’t Be Pro 5G and Pro-Life — Research and Recent Events... 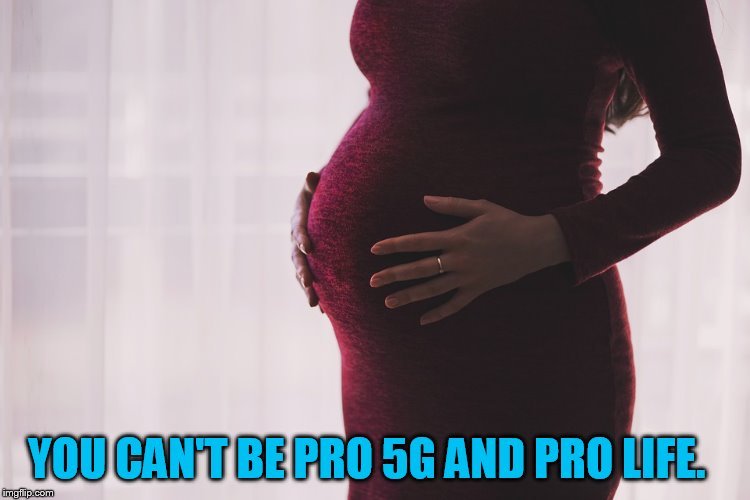 Being “Pro-Life” means different things to different people.  Some proponents fight to protect the lives of the unborn as well as heinous criminals.

The BabySafe Project is one of many groups that oppose all legislation allowing 4G and 5G small cell tower infrastructure being installed everywhere via the “Race for 5G” and the implementation of “Smart Cities.”

Installing 5G radiating technology is definitely not Pro-Life.  There is still no safe level of cell phone and wireless WiFi radiation that has been scientifically determined for children or pregnant women.  In regard to 5G, recent history including a court case has confirmed it’s harmful to everyone – including the unborn:

“The town facing a ‘humanitarian crisis’ caused by the radiation from state-of-the-art street lamps.  Residents have endured insomnia, nose bleeds and even stillbirths, scientist claims”

Mr Steele, who was part of the IEEE, which claims to be ‘the world’s largest technical professional organisation dedicated to advancing technology for the benefit of humanity’, said: ‘We are seeing babies dying in the womb as these transmitters are situated outside people’s bedroom windows. It’s a humanitarian crisis.

These residents suffered tremendously before they finally won their court case:

Mark Steele, a 5G campaigner, has been highlighting the dangers of a secret 5G rollout by Gateshead Council where residents are complaining of increased illness and Cancer in the affected area. There’s enough evidence to conclude the new smart 5G arrays on the top of new LED lampposts emit Class 1 Radiation frequencies and should be treated as a danger to the Public. Gateshead Council ignorantly rebutted clear evidence and created false allegations on social media posts and printed leaflets stating that Mark Steele is spreading Pseudo Science and that the arrays are not dangerous or 5G:

“Please be assured that there is no scientific basis or credible evidence for any of these scare stories about street lights causing cancer and other illnesses.”

They misused Police Powers to gag Mark Steele and yesterday he left a free man and Gateshead Council to fork out £11k of taxpayers money to cover the court cost amounting to woeful ignorance. In Court,  none of the Council Officers could explain what 5G is; and their leading Government expert refused to attend the Court hearing. In conclusion, the Judge refused to gag Mark, stating:

“The public have a right to know.”

The Judge declared Mark Steele as a credible expert and engineer on EMF and GSM technologies, which proves Gateshead Council are liable for corruption, misleading the public, making people ill and attempting to discredit Mark Steele and all others such as Smombie Gate fighting 5G rollouts.

Is this what you want for your community, too?

Research has already proven that exposure to all sources of cell phone and wireless WiFi radiation is harmful.  It’s not just about cancer risk.  Even insurance companies understand this.

The only winners in the “Race for 5G” are those who always have and continue to profit from technology.  5G proponents seem to be willing to do and say anything so they can install this dangerous and unnecessary technology everywhere – despite everything they know, everything that has already happened, and everyone who is opposed to this.