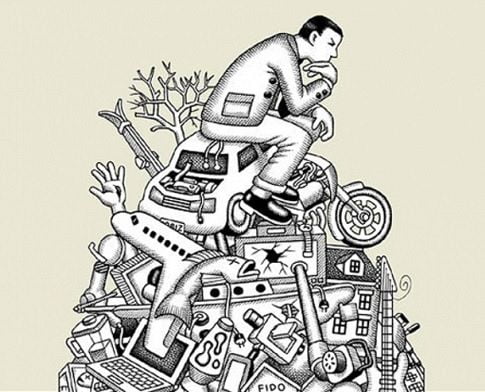 “Anyone who believes that exponential economic growth can go on forever on a finite planet must either be a madman or an economist.” ~ Kenneth Boulding, economist, educator and peace activist.

Countries’ economies are driven by an obsession – continuous growth in the country’s Gross Domestic Product (GDP). And our manic obsession with never-ending economic growth is driving our planet to ruin.

The absurdity of this becomes clear with a little bit of thought. Never-ending growth that relies on extracting resources from a finite planet is, of course, a mathematical impossibility. But well before we reach that point, this obsession will render our planet uninhabitable.

If our concern is the well-being of our citizens, is GDP the appropriate indicator of that? GDP is defined as “the market value of all officially recognized final goods and services produced within a country in a given period of time.” This implies that a cleaning-up operation after an environmental disaster for example gives a boost to GDP.

Dan O’Neill of the Centre for the Advancement of Steady State Economics (CASSE) makes the point that many bad things – such as family breakdown, wars and environmental disaster – contribute to GDP, but good things, where no money is exchanged, do not — such as volunteering.

Research shows that in developing countries there is a strong correlation between GDP per capita and people’s well-being, but in developed countries – such as in Western Europe and the United States – such a correlation no longer applies. For example, in the U.S. and UK, GDP per capita has tripled since 1945, but perception of happiness amongst the population has since flat-lined.

In an article I wrote for the Huffington Post, I attempted to explain the destructiveness and stupidity of our economic growth obsession:

If we insist that western economies must continue to grow year after year for poor people even to have the basics for life, and since we know that only little of the wealth created trickles down, then before too long we will end up devouring the whole planet. Of course, well before we reach that point, we will have degraded our environment to the point where life becomes unsustainable for all of us, rich and poor, and certainly for future generations.

So where do we go from here..?

The Impossible Hamster (and Economic Growth).

Steady-State Economics presents us with an alternative to continuous growth economics. Rob Dietz and Dan O’Neill in their book Enough is Enough define a steady-state economy thusly:

At its simplest, a steady-state economy is an economy that aims to maintain a stable level of resource consumption and a stable population. It’s an economy in which material and energy use are kept within ecological limits, and in which the goal of increasing GDP is replaced by the goal of improving quality of life …. It prioritizes well-being above consumption, and long-term health above short-term gains …. It promises that the transformation of the economic system from growth to stability, from more to enough, would allow us to solve critical environmental problems while maintaining (or even improving) quality of life.

This is certainly a vision worth striving for. Frankly, there is no alternative because the existing growth fetish is driving humanity to despair, polluting our environment, and benefiting a very small segment of society world-wide.

Dietz and O’Neill suggest that a business model needs to go beyond generating revenue and earning profit. Businesses need to work….

… within a framework that respects ecological limits and promotes human well-being.

They suggest the following:

Three ways to align business practices with the goals of a steady-state economy are: (1) promote new business models that generate shared value, (2) create business structures that are less prone to growth, and (3) adopt new measures for success for business.

Our societies need a paradigm shift in what we value. We need to treat our environment and our planet with the respect that is essential for our survival as a species. We owe it to our children and grandchildren to alter the destructive path on which humanity is currently travelling.

He is a British citizen born in Iraq. Since retirement he has devoted his time and energy to building bridges and understanding between minority communities, particularly the Muslim community and the wider community in the South West of England. He was Chair of Devon Racial Equality Council between 2007/8. He writes regularly on issues of social justice and the Middle East, and his articles have been published on The Huffington Post, Dissident Voice, Antiwar.com, Common Dreams and elsewhere.