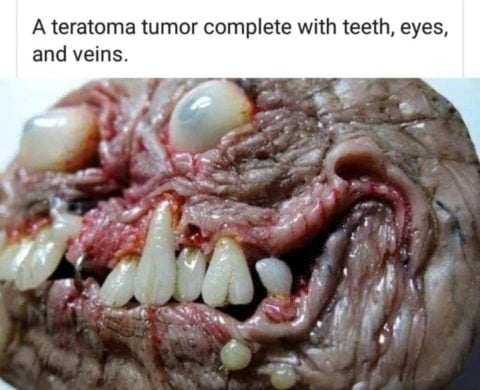 I would like to introduce to you a real life demonic type entity that grows inside of both humans and animals. It can form eyes, teeth, hair and even organs as it parasitically feeds on your body for its life.

In modern science, we call it by the name “teratoma tumor” which is Greek for monster and the Latin tumor, from tumere ‘to swell’ which refers to a mass that grows somewhere in the body.

As you can see for yourself, these tumors look like the scariest fricken monsters that I have ever seen and they are growing in people.

These tumors contain several types of cells and began to grow various forms of tissue such as hair, teeth, eyeballs and even organs and feet. These things are real-life entities growing within people!

Check out this report in 2008 in Colorado Springs, Colorado of a teratoma case involving a baby with a small tumor in his brain. Doctors operated on a three-day old baby removing the tumor and were shocked to find that it contained one fully-formed foot, another partial foot, and the beginnings of a hand and thigh. The doctor said;

“I’ve never seen anything like it before. It looked like the breach delivery of a baby coming out of the brain.” There is the case of the 18-year-old Hispanic boy who was overweight and had breathing problems. One day, he had a coughing fit and was rushed to the hospital after his father insisted when he coughed up blood.

The doctors did x-rays revealing what they thought was a massive cyst, the size of a basketball, crushing his lungs. They performed emergency surgery and were shocked when they found a huge teratoma tumor with hair, teeth and what looked like eyes of an underdeveloped fetus.

The boy was literally carrying a monster baby in his body. It is like the invasion of the body snatchers, but real life.

According to the National Cancer Institute, the most common places for these parasitic entities to grow are within the ovaries, testes and the tailbone. The most common form is a dermoid cyst of the ovary, which contains epidermis, hair follicles, and sebaceous glands.

But sometimes they grow in our heads as in the recent case of this 14-year-old boy with right eye proptosis and visual acuity impairment, headaches, and a neuralgia-like facial pain was found to have a large tumor filling his right cavernous sinus. The doctors found that the had fat, cartilage, muscle strands, bone, and a primordial tooth.(See link for more info)

Or in the lungs like this modern horror story of the 22-year-old woman with a history of a cough was found to have a mass in the left upper lobe of her lungs, mimicking a fungus ball. Yup, there is that demonic fungus again! The doctors performed an upper left upper lobectomy revealing a teratoma tumor composed of skin, sebaceous glands, hair follicles, apocrine glands, smooth muscle, cartilage, fat, and respiratory epithelium.(source link)

The good news is that they performed surgery on the young lad and lady to remove the monsters and both lived happily ever after.

There are reports of these tumors all over the internet. Here are some more examples for you to take a deep dive down the demonic tumor rabbit hole.

The New England Journal of Medicine reports that doctors remove the teeth and the tumor from the boy’s head during brain surgery. This is a form of teratoma called fetus in fetu, and may contain highly developed or even parafunctional organs.  The NE Journal reports:

“Multiple structures along the right periphery of the mass showed characteristics similar to those of teeth in the mandible (arrows). The patient underwent tumor resection through a right pterional approach; multiple fully formed teeth were seen in the tumor mass (Panel B). On pathological examination, an adamantinomatous craniopharyngioma was identified, which is a slow-growing tumor arising from Rathke’s pouch, an embryonic precursor to the anterior pituitary.

Such tumors consist of organized stratified squamous epithelium and wet keratin (keratin nodules) and may be cystic; the cysts are filled with viscous, yellow fluid containing cholesterol crystals. Histologically, adamantinomatous craniopharyngiomas closely resemble some odontogenic tumors and cysts. In the year since he underwent surgery, the patient has required shunting for bilateral subdural hygromas and receives thyroid and adrenal hormone-replacement therapy. He is making good developmental progress, and as part of his follow-up, he currently undergoes routine MRI.”Livescience recently reported on one of the oldest cases when Spanish archaeologists found one of these monstor tumors calcified in the pelvis of a 30- year old Roman woman who died 1,600 years ago which had bone and four deformed teeth embedded within it.

In 2007 a Japanese woman had a teratoma tumour containing a lump holding a head, one fully formed eye and a number of internal organs removed from her right ovary.

In Februay 2014 the New England Journal of Medicine reported that doctors in Maryland in the US found fully-grown teeth growing in a 4 month old baby boy’s enlarged head.

A 2018 study had shown that Intrapulmonary teratoma was misdiagnosed as aspergilloma is a 52‐year‐old woman who was complaining of intermittent episodes of hemoptysis for over 40 years. Chest computed tomography (CT) showed a cavitary lesion (5.5 × 5.3 cm) in the left upper lobe with heterogeneous components. The radiologic manifestations hinted a fungus ball (Fig (Fig1a).1a). Bronchoscopic biopsy and bronchoalveolar lavage failed to identify tumor cells or pathogens. A serum tuberculosis antibody test indicated no abnormalities.

The initial diagnosis was made by a local physician as Aspergillus infection because of positive results of Aspergillus galactomannan (GM) assay. The patient was administered voriconazole (4 mg/kg, q12h) for two weeks; however, her symptoms failed to alleviate. She was transferred to our hospital and underwent left upper lobectomy via a posterolateral thoracotomy through the fifth intercostal space. The specimen revealed a solid‐cystic mass containing yellow sebaceous material, hair and skin (Fig (Fig1b).1b).

Postoperatively, the patient underwent a smooth recovery and was discharged at postoperative day (Source Link)

The word tumor is a general term for the mass that can be medically benign (generally harmless) or malignant (cancerous) growths which can proliferate the body uncontrollably and then destroy the healthy tissues as they spread systematically in the body.

The word cancer comes to us from the Father of Medicine, Hippocrates who in approximately 400 B.C. was said to have coined the term for these masses (tumors) he discovered growing in patients as karkinos — Greek for the word for crab because cancers “grab on and don’t let go.”

A malignant (cancerous) growth refers to a mass which we call a tumor that has the ability to invade surrounding tissues, metastasize (spread to other organs) and which may eventually lead to the patient’s death if untreated.