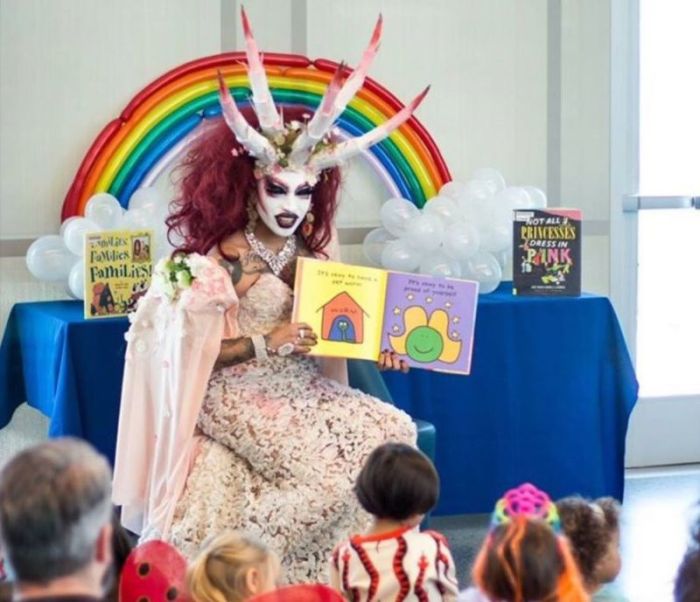 A drag queen who goes by the name Xochi Mochi reads a story to children at the Michelle Obama Neighborhood Library in Long Beach, California, on October 14, 2017. | (Photo: Twitter/@RealOmarNavarro)

A Philadelphia-area community is pushing back against a library’s plans to host a drag queen story hour, saying the event is hostile to Christianity in part because the performer’s stage name is “Annie Christ.”

The drag name Annie Christ is a play on words for AntiChrist. What is being called the “Drag Queen Story Fun Time with Annie” is scheduled for Saturday at the Lansdale Public Library.

“Lansdale, Pennsylvania, is bringing perversion from the nightclubs and sexually charged pride parades into the library with children,” a Facebook event page for a protest and prayer rally says.

“Trusted officials and library staff are promoting a foul-mouthed adult entertainer named ‘Annie Christ’ (a discriminative attack on Christianity) as a role model to our small children, and we must take action. Why is our library taking on such a politically controversial issue especially when receiving our tax dollars?”

According to Philly.com, the library has already received several complaints.

“There’s definitely more complaints about this than any other event we’ve done,” said library director Tom Meyer, but support for the event is “overwhelming,” he said.

“One of the tenets of our mission here is to celebrate cultural diversity in the community, and I think a lot of the parents are interested in that and also the message of the story time, about acceptance and inclusion,” said Meyer who’s unphased by plans for potential protests.

“Library branches in Philadelphia, the Pennsylvania suburbs, and South Jersey have run similar events with drag queens since 2017; the Free Library of Philadelphia alone has hosted more than 50 of them, according to Andrew Nurkin, deputy director of enrichment and civic engagement. Currently, the Fumo Family Library Branch in South Philadelphia is hosting a series of drag-queen trivia nights, including one Feb. 13,” Philly.com reported.

Another drag queen named “Brittany Lynn” is putting on an event at the Please Touch museum in Philadelphia. “We’re not pushing any agenda. We’re just giving a view of diversity and acceptance that isn’t so heteronormative,” the performer said.

Writing on his blog at The American Conservative Wednesday, author Rod Dreher, who regularly documents how fringe sexuality has made inroads into the public domain, noted how outlandish the event seemed.

“What kind of Christofascist could possibly imagine that there’s an agenda present in these things? And I can’t imagine why some folks in the Philly region are troubled by a public library hosting a children’s story hour led by a drag queen named ‘Annie Christ’ (Antichrist — get it?),” he mused sarcastically.

Drag Queen Story Hour started in San Francisco, California, in 2015, where it was launched to provide “positive and unabashedly queer role models” for children and now has chapters in 40 states and in other countries.

In 2017, parents in Long Beach, California, also spoke out against the Drag Queen Story Hour when the Michelle Obama Neighborhood Library hosted a drag queen named Xochi Mochi who dressed as a five-horned demon to read to children.