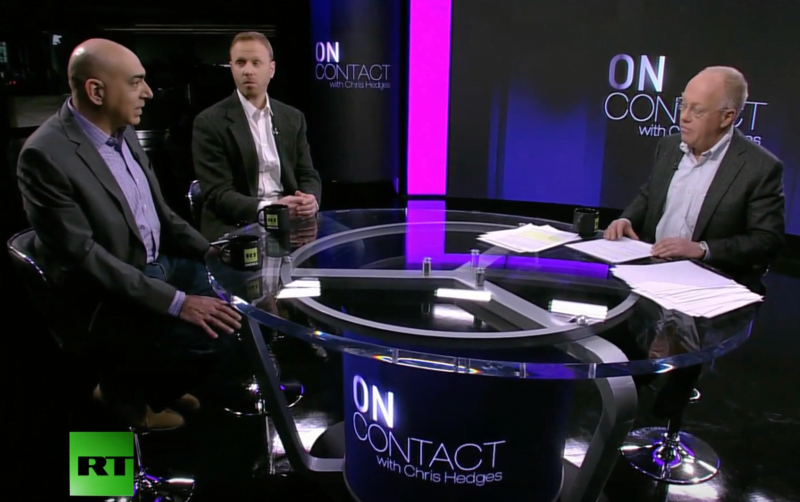 On Saturday, RT aired the second part of a conversation between host Chris Hedges, journalist Max Blumenthaland me about the censored Al Jazeera film The Lobby – USA.

In part two – which you can watch above – we focus on how the film shows Israel lobby groups fabricating accusations of anti-Semitism on US college campuses in order to incite official crackdowns against Palestine solidarity activism.

I tell Hedges that “a lot of these fake anti-Semitism allegations are about trying to lay a factual basis to make federal civil rights complaints or lawsuits that can then be used to force university administrations to muzzle students and teachers.”

The Emergency Committee for Israel, an anti-Palestinian activist group, is also seen in the Al Jazeera film organizing a fake pro-Israel protest at the national conference of Students for Justice in Palestine, using paid fellows who are required to attend.

One of the participants describes it as “a chance to shout at Arabs.”

Blumenthal calls the astroturfed protest an indication of how the Israel lobby is “completely morally bankrupt” and “desperate” for the appearance that it has grassroots support.

Afraid of the base

We also discuss how the base of the Democratic Party – particularly supporters of Senator Bernie Sanders – is continuing to embrace the struggle for Palestinian rights.

“Something to watch is the role of Beto O’Rourke,” Blumenthal states. “He’s someone who the pro-Israel lobby has worked on for years and they will push him to drive a wedge in Bernie’s base, as the anti-Bernie progressive.”

Blumenthal adds that Israel supporters and centrist elites in the Democratic Party are “afraid not of Bernie per se but of his base.”

O’Rourke is seen as a rising star and possible presidential contender after he narrowly failed to defeat Senator Ted Cruz of Texas last November.

But while striking many progressive notes, O’Rourke has toed a staunchly pro-Israel line.

Part one of our conversation with Chris Hedges about The Lobby – USA was broadcast the previous week:

The Lobby–USA is an explosive undercover documentary produced by Al Jazeera’s investigative unit.

It exposes how US lobby groups – including the Foundation for Defense of Democracies and the Israel on Campus Coalition – work closely with the Israeli government to spy on, smear and sabotage American citizens who speak out for Palestinian rights.

But the four-part film never aired on Al Jazeera. After Israel lobby pressure on Qatar, which funds the news network, the documentary was censored.

Starting in August 2018, The Electronic Intifada and Blumenthal’s Grayzone Project began leaking excerpts from the film.

In November, The Electronic Intifada, along with the French publication Orient XXI and Lebanon’s Al-Akhbar, released the entire leaked film online.

You can watch in full episodes one and two, and three and four of The Lobby–USA – the film the Israel lobby did not want you to see.