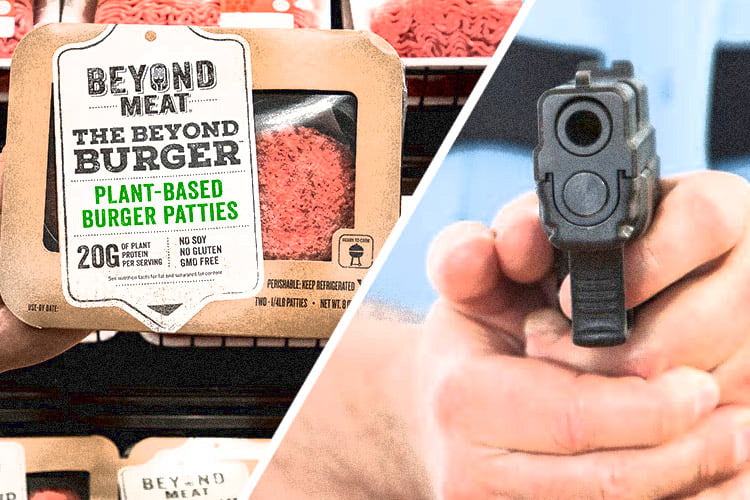 To those who may be unaware, the global beef industry is seething with corruption and corporatism at every level. From killing off endangered species in the US to protect cattle, to killing off journalists and activists in South America, big beef is a force to be reckoned with.

Because factory farming cattle takes such a massive toll on the environment, the beef industry is in a constant state of damage control and subsequent lobbying.

It is estimated that approximately 80 percent of rain forest destruction in the Amazon is done to make way for cattle farming.

Instead of preventing the wholesale destruction of rain forests through illegal logging, and curbing the rampant pollution caused by cattle farming, government has proven to be in the pocket of the industry and has done everything in their power to worsen the problem.

When it was discovered that beef industry hitmen were murdering journalists and activists who exposed their crimes in the rain forests, instead of prosecuting the murderers, government increased the criminalization of activism and journalism. And in some instances, the murders were carried out by government agencies.

As TFTP reported, more than 180 people were killed in 2015 alone for attempting to prevent the illegal logging in the rain forest to make way for beef production.

To dispel any preconceived notions, I eat beef. But I seek out sustainably grown, grass-fed beef that is humanely produced. Because this beef is produced in an environmentally friendly and more sustainable manner, it is more expensive and thus eaten less often—which, if the US had a true free market, would apply to regular beef as well.

It is very expensive to raise cattle—even when mistreating them in factory farms—and the only reason burgers at McDonald’s can be sold for a dollar is because the government steals your money to make it that way.

In the US, beef is artificially cheap due to the slew of government subsidies, grants, and corporate welfare. Your tax dollars—whether you are a vegan or not—directly fund the beef industry in a massive way.

Since government is part of the problem, the free market has stepped in to curb the destruction of land and rampant pollution caused by the beef industry.

This explosion of popularity has the beef industry furious. And, like most massive industries who hate competition in the marketplace, they are turning to government for help.

Across the country, lobbyists on behalf of the beef industry have successfully introduced  bills in more than a dozen states which make it a crime to describe plant-derived meat alternatives as “meat.”

Naturally, no one wants the products to get confused and properly identifying any substance humans intend to put in their bodies is an important issue. However, some of these lobbyists are taking it a step further.

A bill that is currently in committee in Washington state would outright ban the sale of sustainable lab grown meat, making it a crime for anyone to sell it.

While lab grown meat may seem odd to some, it is a sustainable practice, magnitudes better for the environment, does not kill animals, and is entirely up to you to buy it.

Sarah Sorscher, who works on regulatory affairs at the Center for Science in the Public Interest, said the impetus over these bills has little to do with people getting confused over products and everything to do with the beef industry attempting to stifle its competition.

“We think the issue of whether they use a term like meat is a proxy for this bigger issue, which is that the meat industry is concerned about competition from these products,” Ms. Sorscher said, according to the NY Times. “The bills don’t seem to be directed at solving a problem in the marketplace. It is about fighting off competition.”

Indeed, the ranchers have no problem saying this themselves. Instead of finding newer more sustainable and efficient ways of reacting to market demand, these folks would rather force the government to do it for them.

“Just think what it actually costs eventually in a lab as compared to running a ranching operation,” Jim Dinklage, a rancher and the president of the Independent Cattlemen of Nebraska, who has testified in support of meat-labeling legislation in his state said. “It would be a lot cheaper and that puts me out of business.”

While we certainly don’t want people to go out of business, if your industry has become too rigidified to retain the resilience necessary to make adaptations to changes in a free market, and you turn to government to legislate away your competition, you are part of the problem.

Matt Agorist is an honorably discharged veteran of the USMC and former intelligence operator directly tasked by the NSA. This prior experience gives him unique insight into the world of government corruption and the American police state. Agorist has been an independent journalist for over a decade and has been featured on mainstream networks around the world. Agorist is also the Editor at Large at the Free Thought Project. Follow @MattAgorist on Twitter, Steemit, and now on Facebook.