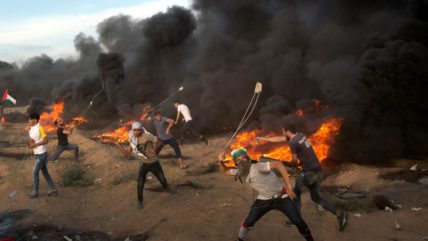 The UN Independent Commission of Inquiry on the 2018 Gaza protests presented its conclusions, according to which 183 Palestinians were killed by Israel, including 35 children. Netanyahu: ‘new records of hypocrisy and lies’ 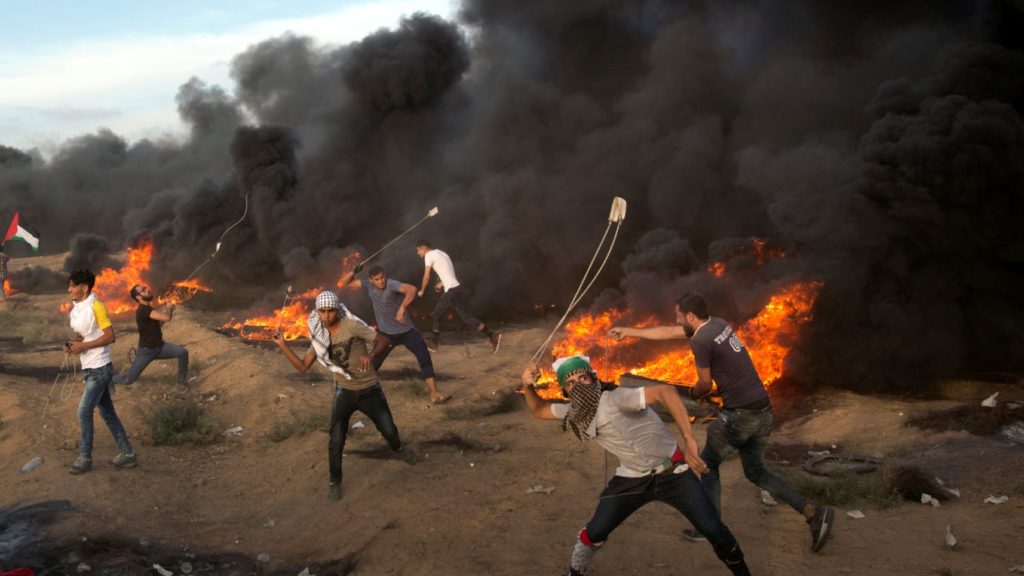 Palestinians hurl stones during a protest at the Gaza Strip’s border with Israel October 5, 2018.Khalil Hamra/AP

The investigative commission of the United Nations Human Rights Council that examined the most recent round of violence on the Israel-Gaza border presented its findings on Thursday, saying it found “reasonable grounds” that Israeli security forces violated international law.

The commission determined that the majority of Gaza protesters who were killed by Israeli forces –154 out of 183 people — had been  unarmed.

The panel also recommended that UN members consider imposing individual sanctions, such as a travel ban or an assets freeze, on those identified as responsible by the commission.

The findings were rejected by several Israeli officials, including Prime Minister Benjamin Netanyahu, who said that Israel outright rejects the report: “The council has set new records of hypocrisy and lies out of an obsessive hatred for Israel.”

Netanyahu added that Israel will continue to “fiercely defend its sovereignty and citizens against Hamas attacks and Iran-backed terror organizations.”

The session opened with a series of video clips from demonstrations on the Gaza side of the border and a description of incidents involving fatalities and injuries on the Palestinian side. The commission’s chairman, Santiago Canton, said at the beginning of the session that his panel had found that the vast majority of thePalestinian protesters were unarmed.

He expressed regret that the Israeli government had not cooperated in the investigation and called on Israel to carry out a substantial investigation of its own.

The commiission found that 35 children had been killed, some from direct weapons fire. The commission also noted one case involving a disabled person in a wheelchair and direct fire at journalists who claimed that they were clearly identified as press. One commission member, Sara Hussein, responded that there was no justification for firing at children and the disabled, whom she claimed posed no danger. The commission also took note of injury to Israeli soldiers in the confrontations.

The commission also recommended that materials it collected be transferred to the International Criminal Court in The Hague and that UN members “consider imposing individual sanctions, such as a travel ban or an assets freeze, on those identified as responsible by the commission.”

The commission said it “recommends that states ([that are} parties to the Geneva Conventions and/or to the Rome Statute carry out their duty to exercise criminal jurisdiction and arrest persons alleged to have committed, or who ordered to have committed, the international crimes described in the present report, and either to try or to extradite them.”

Foreign Minister Yisrael Katz rejected the report outright, charging that “The Human Rights Council’s Theatre of the Absurd has once again produced a report that is hostile, mendacious and biased against Israel.

“The report is based on distorted data, with no attempt to check the facts. The whole purpose of the report is to malign the only democracy in the Middle East and to impair Israel’s right to defend itself against a murderous terror organization,” said Katz who blamed Hamas for bringing  Gaza residents, including women and children, to the security fence.”

In response to the report, the Association for Civil Rights in Israel called for the Israeli government to establish a commission of inquiry to examine the events that took place along the fence. “It is impossible to ignore the death and injury of dozens of civilians, among them, women and children, by claiming self-defense,” said ACRI, which petitioned the High Court against the open-fire orders of the Israel Defense Forces: “After the court refused to examine, as it should have, the army’s open-fire orders and use of force on the ground, and in light of the difficult findings of the UN, the government of Israel must establish a commission of inquiry.”

Adalah – the Legal Center for Arab Minority Rights in Israel, also lauded the UN report, calling it  “a harsh indictment of the Israeli government.”

“The commission adopted the stance of Adalah and other human rights organizations which rejected the High Court decision that allowed the continuation of fatal use of firepower against unarmed demonstrators in Gaza,” said Adalah director Hassan Jabareen.

Another member of the panel, Betty Murungi, said the healthcare system in the Gaza Strip was not capable of dealing with the scope and complexity of the injuries among residents of the Strip. She also called on Israel to lift its blockade of the Hamas-controlled coastal territory and to permit medical assistance to be provided to the wounded.

The panel — known as the UN Human Rights Council Independent Commission of Inquiry on the 2018 Gaza protests — was established in May of last year following an increase in the number of fatalities among Gazans in demonstrations along the Israeli border fence beginning in March of last year. Twenty-nine countries who are members of the Human Rights Council supported the investigation, including Spain and Belgium. The United States and Australian opposed launching the investigation, while Hungary, Britain, Germany, Slovakia and Croatia abstained.

In recent weeks, in addition to the daytime protests along the border, Hamas has organized increasing levels of nighttime rioting near the border, including the throwing of explosives and use of loudspeakers, frequently until midnight, to frighten Israelis living near the border.

Of the 183 killed by live fire, 35 were children. While 940 of the 6,106 injured were also children. The council also found that Israel directly shot at journalists who had clearly distinguished themselves as such.

“There is no justification for shooting children and disabled people that pose no risk,” Hussein said.

Anne Herzberg, NGO Monitor’s Legal Advisor and UN Liaison,  also rejected the report saying: “The UN Human Rights Council, dominated by dictators and rights abusers, has issued yet another absurd report whitewashing Hamas terrorism while condemning Israel for protecting its citizens. It is laughable that the UN treats cross-border violence as the same as a domestic policing situation.”

Education Minister Naftali Bennett said in response: “It’s hard to imagine the UN could sink any lower. Alternating between excusing terror to ignoring terror it is letting down democracies and backing dictators and tyrants.”

“The commission found reasonable grounds to believe that Israel violated those rights when its forces used lethal force against children who did not pose an imminent threat of death or serious injury to others at the time they were shot,” the report adds.

The commission recommended that the government investigate every protest-related killing.

Israel utterly rejects the biased and distorted kangaroo court “report” published by the “Commission of Inquiry” of the @UN_HRC .
The HRC is a de facto accomplice of #Hamas ,supporting and encouraging aggression against Israel and the oppression of the people of Gaza.
פלאש90 pic.twitter.com/wMVQnvuqOH

Strategic Affairs Minister Gilad Erdan took to Twitter as well, saying: “The @UNHumanRights report is not only absurd- it actively encourages #Hamas terror.” Erdan added that “the UN has become a partner in Hamas terror.”

The @UNHumanRights report is not only absurd- it actively encourages #Hamas terror, by ignoring Hamas' use of #Gaza marches as cover for terror & its terror attacks against Israeli civilians

The UN has become a partner in Hamas terror. All democracies must reexamine UN funding