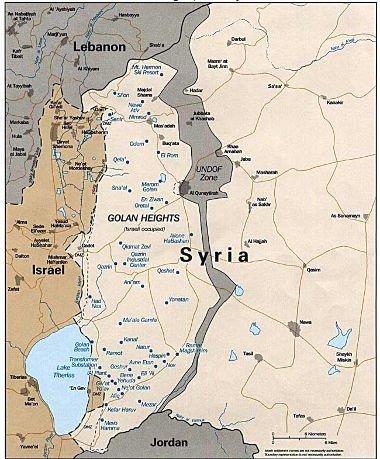 The people who paid for Trump’s election campaign, foremost casino magnate and zionist Sheldon Adelson, want to keep the Israeli Prime Minister Bibi Netanyahoo in office. Netanyahoo is under investigation in several corruption cases and has a serious competitor in the upcoming general elections in Israel. Trump needs money for his re-election campaign and is willing to do anything to get it.

Trump is colluding with Netayahoo to influence the Israeli election. It is the reason why he decided yesterday to claim that Israel has sovereignty over the Golan Heights:

Donald J. Trump @realDonaldTrump – 16:50 utc – 21 Mar 2019
After 52 years it is time for the United States to fully recognize Israel’s Sovereignty over the Golan Heights, which is of critical strategic and security importance to the State of Israel and Regional Stability!

The Heights are Syrian lands that were occupied by Israel during its 1967 war of aggression against Egypt and Syria.

The Heights are of strategic-military value. Whoever controls them can also control the plains east, west and south to it. Israel built several radar and spy station on the heights that allow it to see deep into Syria. This profile picture falsely depicts the occupied Heights territory as Israeli.
The internationally recognized border runs near the river line.
bigger
McClatchy has the tic toc of Trump’s decision:

President Donald Trump’s tweet on Thursday recognizing the Golan Heights as Israeli territory surprised members of his own Middle East peace team, the State Department, and Israeli officials.
U.S. diplomats and White House aides had believed the Golan Heights issue would be front and center at next week’s meetings between Trump and Israel’s Prime Minister Benjamin Netanyahu at the White House. But they were unprepared for any presidential announcement this week.

Trump’s declaration was expected, but not for yesterday. The reason for the premature ejaculation is obvious. Yesterday a new case of Netyahoo’s utter corruption came to light:

State prosecutors are reportedly considering opening yet another criminal graft investigation against Prime Minister Benjamin Netanyahu, this time in the so-called submarine affair, citing “dramatic” new information.
Netanyahoo made a profit of $4 million from shares he owned in a company that was bought out by Thyssen-Krupp, a German conglomerate from which Israel under Netanyahoo ordered submarines and corvettes.

The new revelations threatened to blow up Netanyahoo’s reelection campaign. Trump’s sudden Golan Heights move was timed to bury them.

The wording of Trump’s tweet likely falls short of a formal, declarative recognition, according to Dan Shapiro, former U.S. ambassador to Israel under former President Barack Obama. But little more than a statement from the president or secretary of state is necessary to secure the major U.S. policy shift.
The White House is mulling several ways to formalize the policy decision, including a potential executive order signing ceremony on Monday with Netanyahu present.
…
Administration officials said that National Security Advisor John Bolton was instrumental to the decision, after visiting Israel in January to assure officials there that the United States would not abandon them in Syria despite Trump’s sudden withdrawal of troops from the battlefield.

The hasty move itself was typical Bolton. There was no policy process to plan and announce the decision. Long standing legal advise from other departments which warned of the move was ignored.

Trump has no power to give Israel sovereignty over anything. Several UN resolutions determined (UNSCR242) and reconfirmed (UNSCR497) that the Golan Heights are Syrian territory illegally occupied by Israel. The European Union, Russia and others rejected Trump’s move and called it illegal.

Trump’s move though might have some standing in U.S. courts. That will become important when law suites are filed against Genie Energy Ltd., an oil company in Newark New Jersey that wants to drill for oil in the Golan Heights area:

Genie Energy is no “penny stock” run-of-the-mill oil company. Its board of Advisors includes Dick Cheney. It includes former CIA head and chairman of the above-mentioned Foundation for Defense of Democracies, James Woolsey. It includes Jacob Lord Rothschild of the London banking dynasty and a former business partner of convicted Russian oil oligarch, Mikhail Khodorkovsky. Before his arrest Khodorkovsky secretly transferred his shares in Yukos Oil to Rothschild.
Further this little-known Newark, New Jersey oil company board includes former US Energy Secretary Bill Richardson, pro-Israel media mogul and owner of Trump’s favorite Fox News TV, Rupert Murdoch. Also on the board are former Treasury Secretary Larry Summers and hedge fund billionaire Michael Steinhardt. Steinhardt, a philanthropic friend of Israel and of Marc Rich, is also a board member of Woolsey’s neo-con Foundation for the Defense of Democracies, which advises Trump among other things that it would be good for Washington to recognize Israel as legitimate owner of the Golan Heights lands taken by Dayan in the 1967 War.

Under international law it is illegal to draw natural resources from occupied territory. With Trump’s move the owners and board members of Genie Energy receive an additional layer of legal cover in U.S. and Israeli courts.

The international consequences of the move are for now subtle. On the ground nothing changed. The Israeli occupation was and is illegal.

The occupied Golan Heights include the Sheeba farms which are Lebanese territory. The resistance axis of Hizbullah, Syria and Iran is strengthened by Trump’s move and will use it move to justify further activities against Israel and perhaps against United States interests elsewhere. The move will be used to recruit more resistance fighters, especially from the Druze on the Syrian side of the Golan who have brethren living on the Israel controlled side.

It further delegitimizes the Syrian ‘rebels’ and the Syrian Kurds who are allied with the U.S. while Trump gives away Syrian land. It demonstrates the weakness of those Arab rulers who are allied with the U.S. but were not even informed that Trump planed to hand off Arab land. It will incite their domestic population against them. That makes it much more difficult for them to continue their policy of detente with Israel.

The ‘deal of the century’ for peace between Arabs and the Zionists that Trump’s son in law Jared Kushner was supposed to arrange is now dead.