Prepare For Change
Home ARCONTES Pompeo Unveils New US Strategy of Attributing Blame for Attacks Before They... 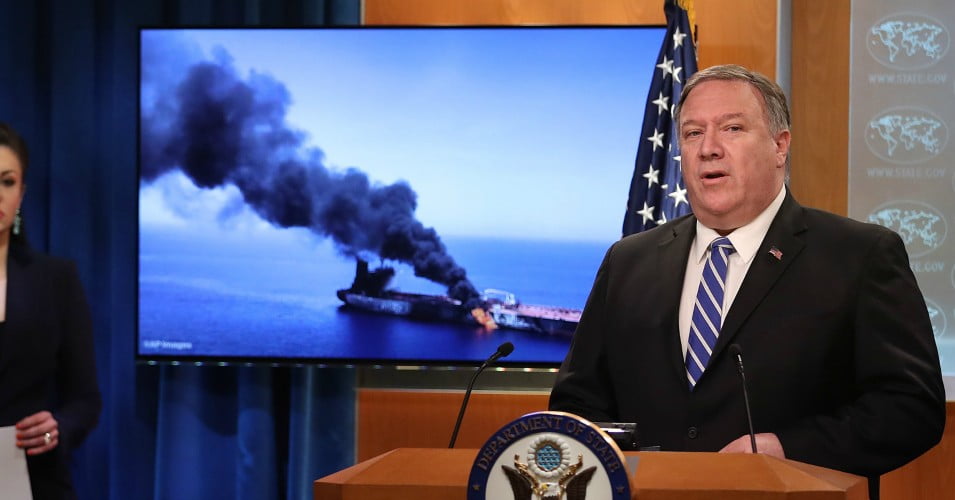 The US Secretary of State, Mike Pompeo, has blamed Iran for the deaths of 23 Swedish sailors in an attack on an oil tanker in the Strait of Hormuz. However, in what is said to be an unusual move, the incident referred to by Mr Pompeo hasn’t yet happened and no-one has died. Nonetheless, Mr Pompeo was adamant that Iran must bear responsibility for the future incident, and has vowed a strong response:

“It is the assessment of the US Government that Iran will be responsible for this terrible incident, which could well happen in the next few days or weeks. This possible future attack is a threat to international peace and security, a blatant assault on the freedom of navigation, and an unacceptable escalation of tension by Iran. We cannot let this possible attack go unanswered.”

Whilst making an accusation before an incident has taken place took some by surprise, according to an unnamed official in the Trump administration, it is a necessary step to defend the international rules based system from the increasing lawlessness of a number of states around the world:

“For some time, we’ve been making intelligence assessments just a few hours after incidents, long before the evidence is in, and using words like ‘probable’ and ‘highly likely’. But while this has been a useful tool, it’s become clear recently that it really doesn’t go far enough. What the Secretary of State said today is a necessary step, and it sends out a clear message to our adversaries: not only do we not need any evidence before we make our accusations; from now on we put you on notice that we don’t even need an incident.”

The move has been welcomed by the British Government, who issued a statement about the non-attack on the Swedish Tanker.

“It is almost certain that a branch of the Iranian military — the Islamic Revolutionary Guard Corps — will be responsible for the possible attack on the Swedish oil tanker which could happen at some point. No other state or non-state actor could plausibly be responsible for such future attacks. We condemn in the strongest terms what it is highly likely that Iran almost certainly might do, and we stand shoulder to shoulder with the US in condemning this destabilising behaviour that Iran could potentially take.”

According to a US State Department official, Mr Pompeo, who recently admitted to lying, stealing and cheating when director of the CIA, is considering a number of other pre-emptive accusations over the coming weeks. These include condemnation of a possible chemical weapons attack carried out by the Syrian Government next year; plus the discovery of some hidden dead ducks in the English City of Salisbury. According to a source at the New York Times, the CIA director, Gina Haspel, is currently working with British Intelligence to prepare pictures of the ducks to show to President Trump, who is apparently unaware of what ducks, especially dead ones, look like.

When we contacted the Swedish Foreign office to get their reaction to Mr Pompeo’s pre-emptive claims, they said that none of their tankers had been attacked, no Swedish sailors had died and that launching accusations without even an incident, let alone evidence of responsibility, was “deeply unhelpful” to international relations. However, after receiving a phone call from John Bolton, they called us back to say that they now wholeheartedly agree with Mr Pompeo’s statement, are truly sorry for what they said before, and stand shoulder to shoulder with the US in defending the international rules based system. They also condemned Iran for attacking its ship and killing its sailors, which it hasn’t done yet but could well do at some point.