Prepare For Change
Home Ascension …and forgive them their debts 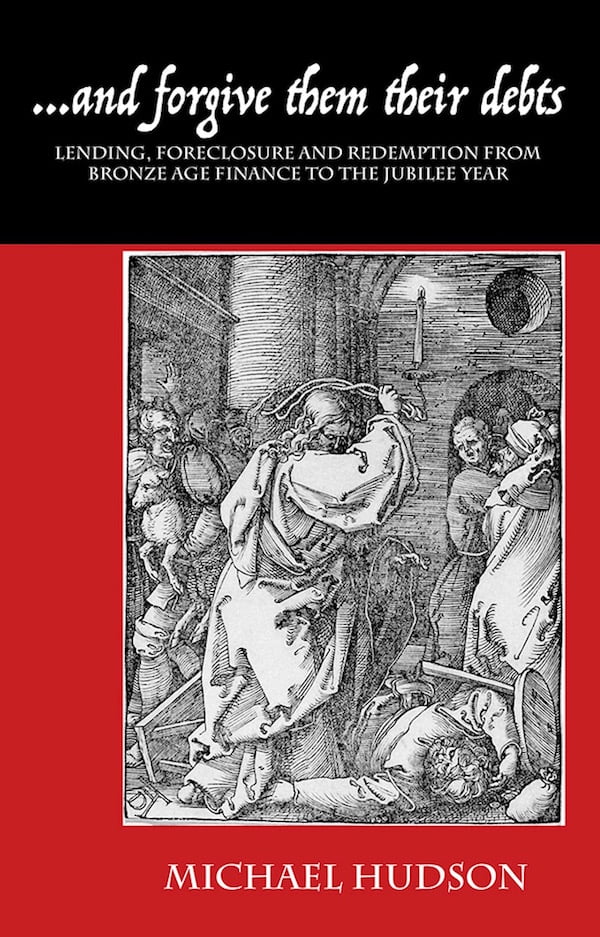 A book by Michael Hudson

I’m very excited to announce that my new book, …and forgive them their debts: Lending, Foreclosure and Redemption — From Bronze Age Finance to the Jubilee Year (ISLET-Verlag Dresden), is available now.,

Thank you. You can learn more about the book below.

…and forgive them their debts
Lending, Foreclosure and Redemption
From Bronze Age Finance to the Jubilee Year

In …and forgive them their debts, renowned professor of economics, Michael Hudson – and one of the few who could see the 2008 financial crisis coming – takes us on an epic journey through the economies of ancient civilizations. For the past 40 years in conjunction with the Harvard Peabody Museum, he and his colleagues have documented the archeological record and history of debt, and how societies have dealt with (or failed to deal with) the proliferation of debts that cannot be paid. In the pages of …and forgive them their debts, readers will discover shocking historical truths about how debt played a central role in shaping ancient societies. Perhaps most striking of all is that – in a nearly complete consensus of Assyriologists & biblical scholars – the Bible is preoccupied with debt, not sin.

In all eras – from antiquity to the present – debts have tended to mount up faster than the ability of most debtors to pay. That is a basic mathematical fact: Economic growth is arithmetic and can’t keep up with the exponential growth of debt growing at compound interest.

The big economic question is – and has always been – what will happen if debts cannot be paid? Will there be a debt writedown in favor of debtors (as has been done for large corporations), or will creditors be allowed to foreclose (as is always done on personal debtors and mortgage-holders), leading to their political takeover of the assets of the economy – and the government’s public sector?

The problem of debt backlogs was created with the invention of interest-bearing loans in agrarian 3rd Millennium BC Mesopotamia. The remedy of record was the royal Clean Slate proclamation or Jubilee Year of debt forgiveness. These proclamations had three functions: (1) They restored financial balance by annulling the backlog of crop debts that had accrued; (2) they liberated indebted bondservants (and their families); and (3) they restored land tenure rights, enabling debtors to continue living productively on the land, pay taxes, and be available for military service and corvée labor.

Clean Slate debt cancellations (the Jubilee Year), used in Babylonia since Hammurabi’s dynasty, first appear in the Bible in Leviticus 25. Jesus’s first sermon announced that he had come to proclaim it. This message – more than other religious claims – is what threatened his enemies, and why he was put to death.

This interpretation has been all but expunged from our contemporary understanding of the phrase, “…and forgive them their debts,” in The Lord’s Prayer. It has been changed to “…and forgive them their trespasses (or sins),” depending on the particular Christian tradition that influenced the translation from the Greek opheilēma/opheiletēs (debts/debtors). On the contrary, debt repayment has become sanctified and mystified as a way of moralizing claims on borrowers, allowing creditor elites and oligarchs the leverage to take over societies and privatize their public assets, especially in hard times.

Historically, no monarchy or government has survived takeover by creditor elites and oligarchs (viz: Rome). In a time of increasing economic and political polarization, and a global economy deeper in debt than at the height of the 2008 financial crisis, …and forgive them their debts shows what individuals, governments, and societies can learn from the ancient past for restoring economic and social stability today.

“Michael Hudson is surely the most innovative, and in my view, the most important economic historian of the last half century. This is the consummate product of 30 years of research on the history of a subject that could not be more important to our own situation today. We like to use the expression words “ancient history” as a code-word for “of no possible relevance to matters of consequence today.” This book clearly demonstrates that nothing could be further from the truth. If we don’t take heed, ancient history is likely to engulf us in ways that will shatter our complacency in the most disastrous of ways. Hudson is giving us a desperately needed warning, and we would do well to pay very close attention.” — David Graeber, Professor of Anthropology at the London School of Economics, author of the international bestseller Debt: The First 5,000 Years

“As someone in the leadership of the international Jubilee 2000 campaign, I have always believed that the Judaic and Christian principle of Jubilee – the periodic correction of economic imbalances – was a principle of social justice deeply embedded in the human psyche. Michael Hudson’s excavation of the ancient historical roots of the Jubilee, Sabbath or sabbatical principle, common to all the Abrahamic faiths, makes this book an essential read for those that want to deepen their understanding of the world’s great religions. His account of the evolution of creditor-debtor relationships, as well as of the development of the rate of interest in ancient Assyria makes this book of particular relevance to historians of western economic thought and practice. But above all, Hudson’s book reminds us that human history is littered with bitter struggles between debtors and their creditors, between the landed and the landless, and between workers and rentiers. And that the struggle continues.” — Ann Pettifor, Political Economist, Director of PRIME, Economic Adviser to Jeremy Corbyn and the British Labour Party

“Michael Hudson reveals the real meaning of “Forgive us our sins.” It has far more to do with throwing the moneylenders out of the Temple than today’s moneylenders would like you to know.” — Steve Keen, Economist, Head of the School of Economics, Politics, and History at Kingston University, Revere Award for Economics winner for being the economist who first and foremost cogently warned the world of the coming 2008 Global Financial Collapse

“Michael Hudson is the best economist in the world… Readers often ask me how they can learn economics. My answer is to spend many hours with Hudson’s books. You will understand economics better than any Nobel Prize-winning economist.” — Paul Craig Roberts, former under-secretary of the U.S. Treasury (Reagan Administration) and author of The Failure of Laissez Faire Capitalism and Economic Dissolution of the West