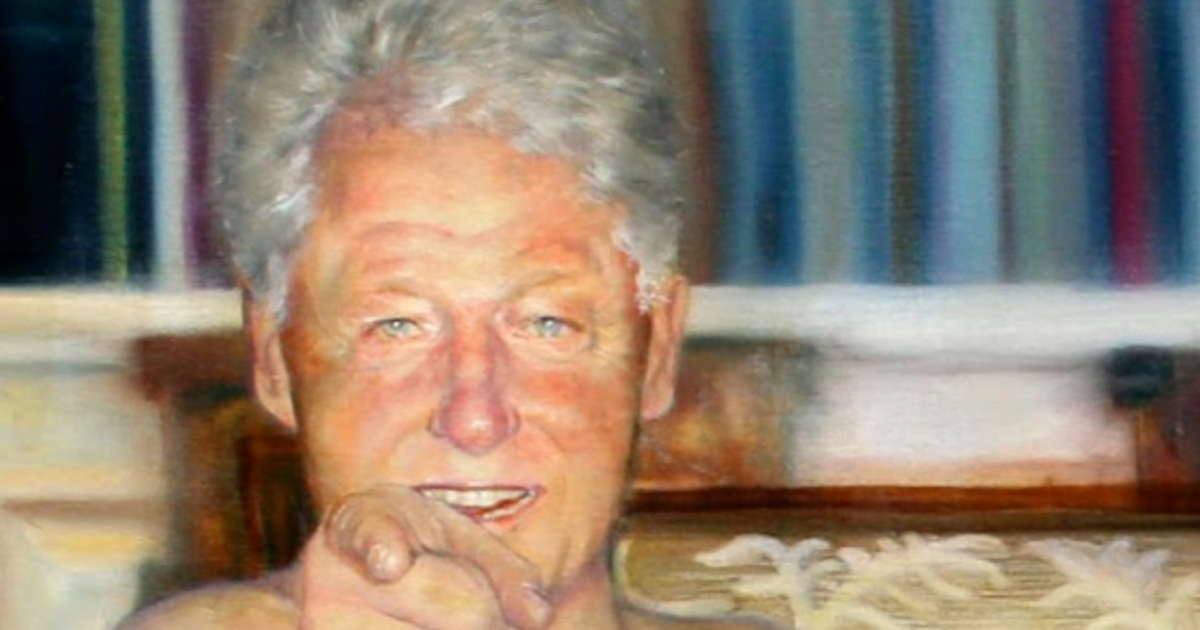 DailyMail reports Jeffrey Epstein had a bizarre portrait of Bill Clinton in a dress hanging in his Manhattan mansion, DailyMailTV can reveal.

The picture depicting the former president apparently lounging on a chair in the Oval Office, wearing red heels and posing suggestively in a blue dress redolent of Monica Lewinsky was in a room off the stairway of the Upper East Side townhouse.

The dress is also strikingly similar to one worn by Hillary Clinton at the 2009 Kennedy Center Honors. The original painting is by Australian-American artist Petrina Ryan-Kleid, although it is unclear if Epstein had bought the canvas or had a print mounted. Ryan-Kleid exhibited for her degree show when she graduated with an MFA in 2012 from the New York Academy of Art.

The painting was secretly snapped inside the pedophile’s lavish $56 million home in October 2012, four years after Epstein completed his sweetheart deal for prostitution of a minor and seven years before he was accused of running a sex trafficking ring of underage girls.

The source, who asked to remain anonymous, was visiting Epstein to present a business proposal – an encounter with the pervert which included spotting a girl who seemed to be 14 waiting to see the financier.

The woman said she was shocked to catch sight of the portrait through an open door as she walked through the ornate home with her business partner.

She told DailyMailTV: ‘It was absolutely Bill Clinton. It was shocking – it was definitely a painting of him. It was a very provocative, sexual picture. He was wearing heels, a blue dress and his hand was in a weird position.

The color of the dress seemed to be a pointed reference to Clinton’s former intern Monica Lewinsky, who a blue dress during their infamous sexual encounter in the White House.

Epstein and Clinton were once friends, with the now 72-year-old flying on the now deceased financier’s private plane, dubbed the Lolita Express, several times and on his own account vising the town house once – making it possible he could have seen the bizarre painting.

Why did Jeffrey Epstein have this painting of Bill Clinton wearing a blue DRESS and red heels inside his mansion? https://t.co/NGOcsGAIN5 pic.twitter.com/QMlOvKSh9g

And some of his victims, like Virginia Roberts, in her court filings, said Epstein remarked to her that “information is king,” &mentioned that Bill Clinton was there because “he owes me a favor.” Fraud and Blackmail: Jeffrey Epstein’s Finances #epsteinDead https://t.co/wMsZnVBYsz

Now we know how Epstein got his money!!! Blackmail!! 🤑🤩 All these pedis!! Even Prince Andrew, Bill Clinton, many celebs, I wouldn’t be surprised if he was killed by those who didn’t want their secrets revealed! Now there’s video! Good luck!

Haven’t you figured it out yet, Clinton was a target for blackmail.

I’m guessing he knew the game that was being played.

He got a lot of free flights though while they were trying to compromise him.