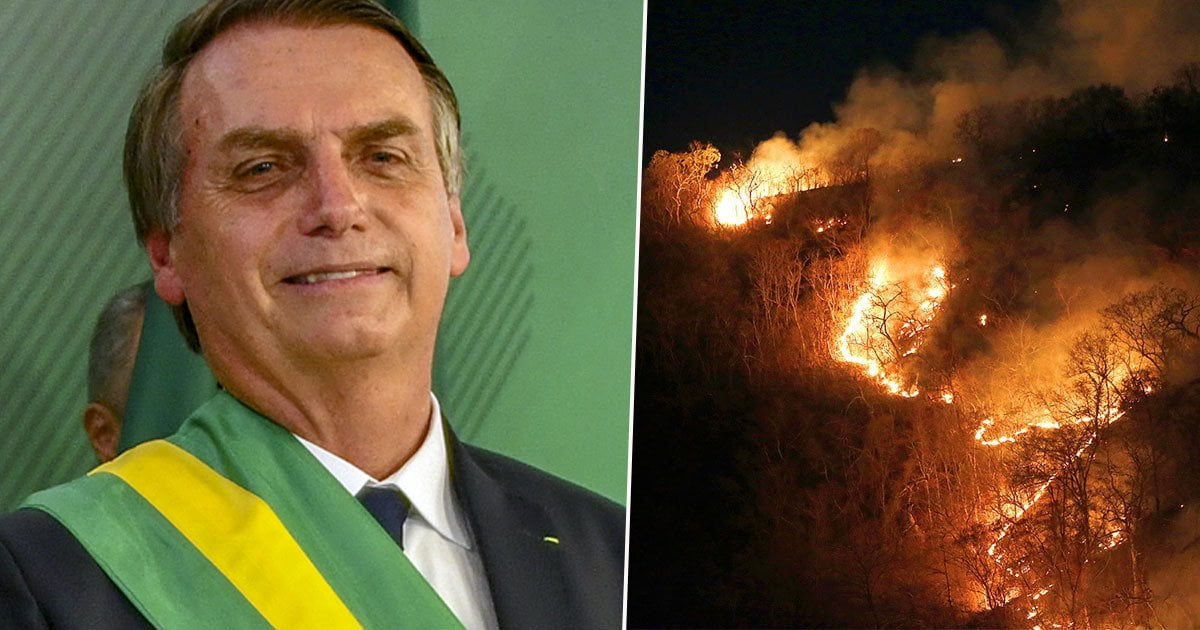 The Brazilian president is actively trying to devastate the Amazon rainforest, leaked documents have revealed.

The documents show arguments put forward by Jair Bolsonaro that a strong government presence in the Amazon region is important to prevent any conservation projects going forward.

Intending to build bridges, motorways, and a hydroelectric plant in the rainforest, the Brazilian government hopes to ‘fight off international pressure’ to protect the Amazon, according to the leaked information.

As reported by The Independent, the plans were leaked to political website openDemocracy and include PowerPoint slides believed to have been presented at a meeting in February between Brazilian government officials and local leaders in Para state, which is home to the Amazonia National Park.

During the meeting, Brazilian ministers put forward projects planned for the region by President Bolsonaro’s government, with one slide mentioning a priority to strategically occupy the rainforest.

The slide reads, as per openDemocracy:

“Development projects must be implemented on the Amazon basin to integrate it into the rest of the national territory in order to fight off international pressure for the implementation of the so-called ‘Triple A’ project.

“To do this, it is necessary to build the Trombetas River hydroelectric plant, the Óbidos bridge over the Amazon River, and the implementation of the BR-163 highway to the border with Suriname.”

Even before the fires, President Bolsonaro and Big Corporations Were Teaming Up to Destroy the Amazon

The ‘Triple A’ (Andes, Amazon and Atlantic) project is a conservation effort led by the organisation Gaia Amazonas, which aims to conserve 265 million square kilometers of jungle and ‘the lungs of our world’.

But now Bolsonaro, Brazil’s controversial far-right president, appears to be sabotaging this effort as devastating fires rage through the Amazon. Fires which are causing a loss equivalent to three football fields per minute, according to the latest government data.

The rainforest – which covers northwestern Brazil and extends into Colombia, Peru and other South American countries – has been burning for weeks, plunging Brazil’s Sao Paulo into darkness and devastating the Amazon.

If the fire continues to burn at its current rate, this will be the first month for several years in which Brazil loses an area of forest bigger than Greater London, with many fearing it will never be able to recover.

According to the latest data from Brazilian satellites, as per The Guardian, 1,345 square kilometres of the region were cleared in July – a third higher than the previous monthly record under its current monitoring system, the Deter B satellite system, which started in 2015.

Bolsonaro yesterday (August 22) claimed his government ‘lacks the resources’ to extinguish the fire, although environmental groups are now placing the blame for the devastation directly on him.

Richard George, head of forests at Greenpeace, told The Independent:

“The whole area around the Amazon has been highly volatile with loggers and farmers, and Bolsonaro has absolutely lit a torch under that.”

The fire currently sweeping through the rainforest reportedly took hold after farmers announced a coordinated ‘day of fire’ on August 10, due to the president giving the go-ahead for farmers and illegal loggers to enter indigenous communities.

The Amazon rainforest provides 20 per cent of the world’s oxygen, Business Insider reports. However, if it continues to burn it would not only stop producing this oxygen and supporting wildlife, but it could also worsen climate change by triggering a ‘doomsday dieback scenario’.

This would ultimately result in dry leaves which, as well as being unable to absorb as much carbon, would be much more flammable and likely to spread fires – potentially causing the release of 140 billion tonnes of carbon stored in the Amazon into the atmosphere. As a result, global temperatures could rise even further.

Since the public were made aware of the devastating fire, millions rallied together to sign a petition urging the Brazilian government to ban the burning of the Amazon – something which could easily play a detrimental role in the climate emergency we are currently facing.

You can sign the petition to put an end to the burning of the rainforest here.