Prepare For Change
Home ARCONTES Inside Afghanistan: Nearly Nine in 10 Afghans Are Suffering 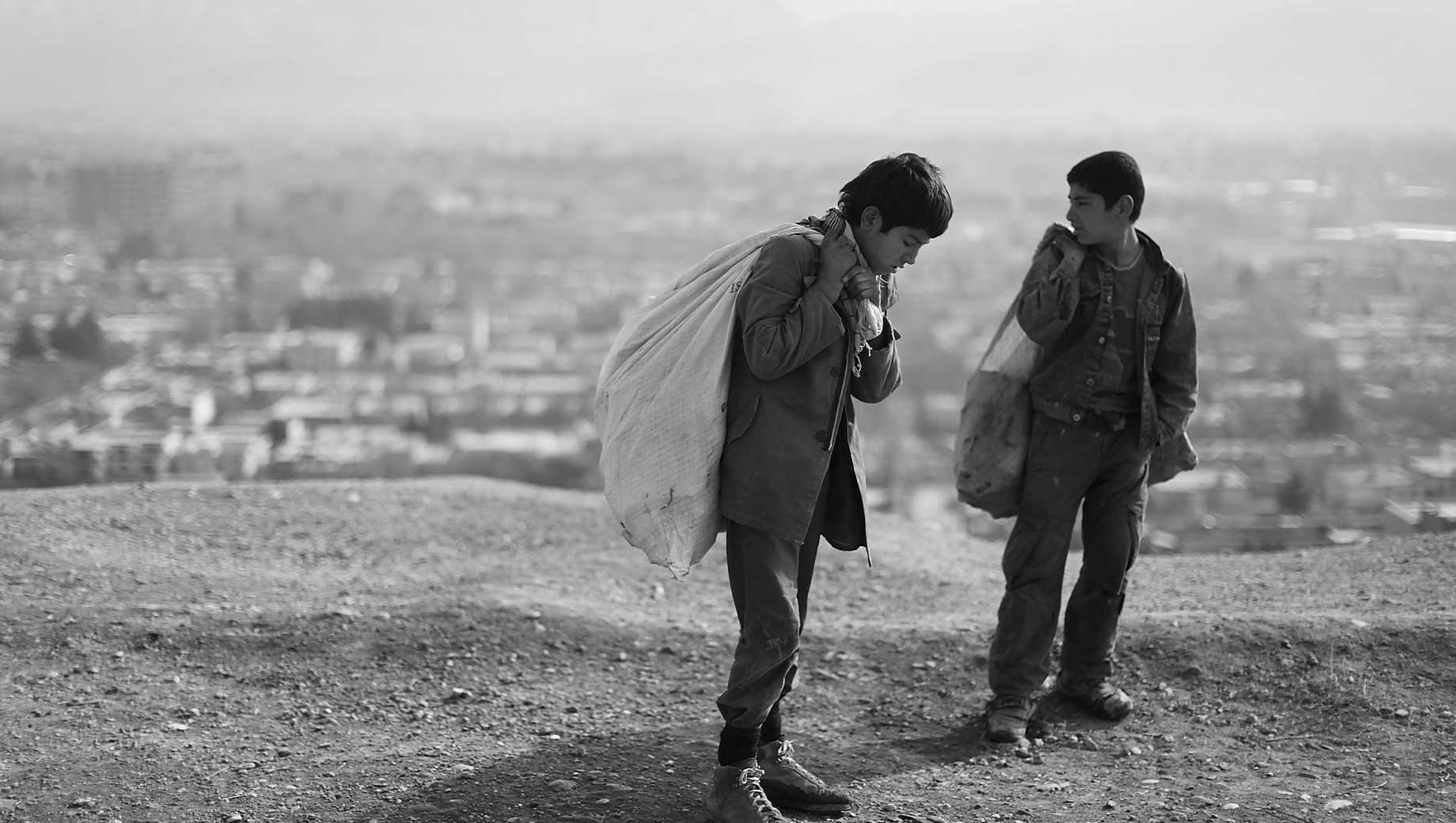 WASHINGTON, D.C. — The collapse in peace negotiations between the U.S. and Taliban has removed a potential barrier to holding Afghanistan’s presidential election as scheduled on Sept. 28. But the recent surge in Taliban attacks dispels any expectation that the election will lead to peace and stability for a people who rate their lives more poorly than any other worldwide.

Quick Summary: Gallup’s surveys in Afghanistan reveal just how devastating the country’s chronic conflict has been to Afghans’ daily lives. Wellbeing indicators paint a bleak picture of hopelessness and suffering among the population; in 2018, Afghans’ average ratings of their current lives and predicted ratings of their lives in five years matched or fell below previous record-lows for any country worldwide.

Afghans Give Record-Low Life Evaluations — For Any Country: On a ladder scale where “0” represents their worst possible life and “10” their best possible life, Afghans gave an average rating of 2.7 in 2018 — tied for the lowest Gallup has recorded in any country since it began tracking these measures. Asked to predict where their lives would be in five years on the same scale, Afghans’ average response in 2018 was 2.3, a new low for any country in any year. 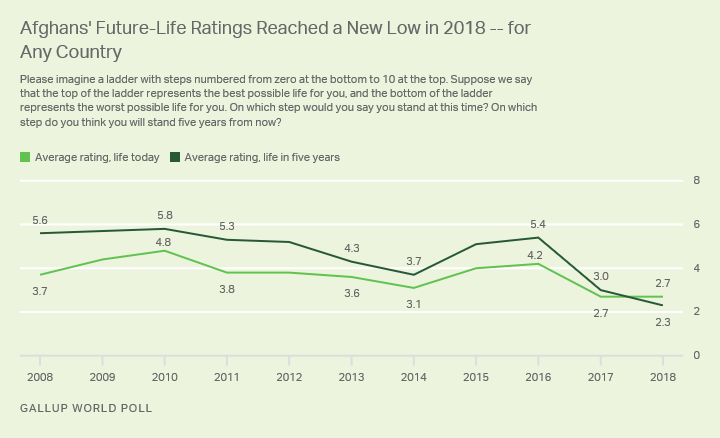 Afghans’ 2018 life ratings were remarkable not just for the low averages, but because it was the first time in more than a decade of data collection around the world that any population’s average predicted rating for their future lives was lower than its average current-life rating.

The unprecedented finding highlights Afghans’ near-universal lack of optimism, all the more notable given the population’s very young age structure: Two-thirds of adults interviewed for the 2018 survey were aged 35 or younger.

Record 85% of Afghans Are “Suffering.” For the second consecutive year in 2018, no Afghans rated their current and future lives* positively enough to be considered “thriving.” At the same time, the percentage who rated their lives so poorly that they are considered “suffering” shot to a record-high 85%. This is a new record not only for Afghanistan, but also for the world. The country also led the world in suffering in 2013, 2014 and 2017. 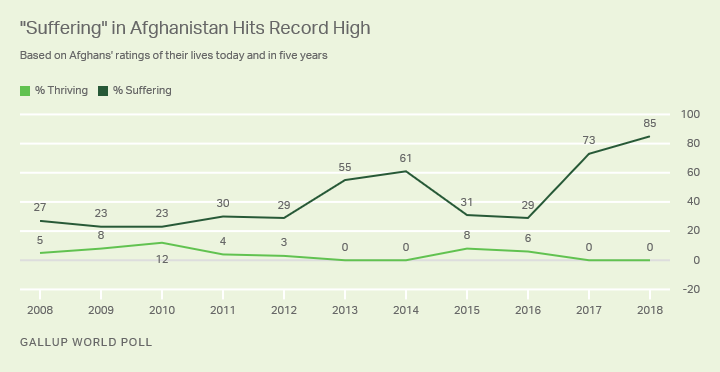 Majority of Afghans Said They Worried a Lot the Previous Day: Afghans also gave negative responses in 2018 when asked about their day-to-day experiences and emotions. Just over one in three Afghans (36%) said they smiled or laughed a lot the previous day, down from 52% in 2016; the figure matches the lowest Gallup has ever recorded in any country. Conversely, 52% of Afghans said they experienced worry for much of the previous day, up from 42% in 2016. The proportion of Afghans who say they experienced enjoyment and who say they were treated with respect the previous day both fell below half (48%) for the first time in 2018. 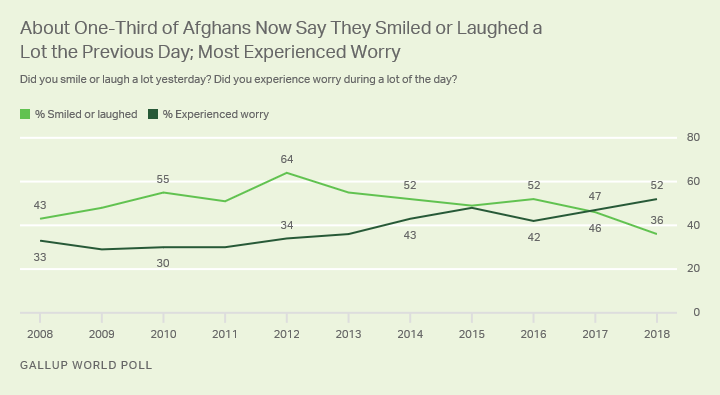 Implications: Lacking safety and security, Afghans have had little opportunity to improve their economic status or rebuild critical infrastructure, such as roads, schools and healthcare facilities. Conflict in the countryside has led hundreds of thousands of Afghans to flee their homes, leading to an influx of displaced people in urban centers such as Kabul, where poverty and unemployment are rampant.

These conditions are the context for Afghans’ record-low levels of both wellbeing and hope for the future. It is difficult to foresee the implications that current events may have for the population’s wellbeing over the long-term.

The end of U.S./Taliban negotiations is good news for many Afghans fearful that a withdrawal of U.S. troops would have strengthened the Taliban’s grip over much of the country. However, though millions will risk their own safety to vote in this month’s election, the current climate of uncertainty and the Taliban’s recent surge in attacks on civilians do not bode well for the government’s ability to help Afghans build better lives for themselves.

*Gallup asks adults worldwide to evaluate their lives on the Cantril Self-Anchoring Striving Scale, where zero represents the worst possible life and 10 represents the best possible life. Gallup classifies people as “thriving” if they rate their current life a 7 or higher and their life in five years an 8 or higher, and “suffering” if they rate both their current and future life situations a 4 or lower. Those in the middle are “struggling.”

Learn more about how the Gallup World Poll works.