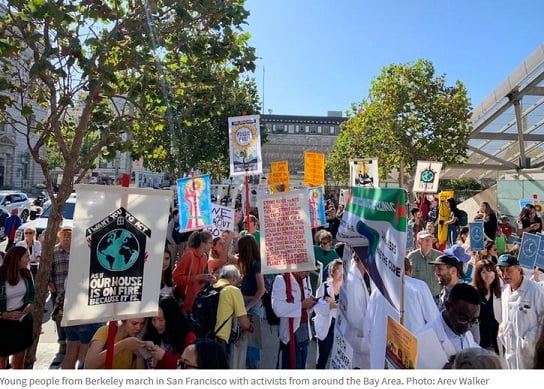 Sept. 20, 2019, was Friday, a school day. But countless young people in the U.S. and across the world skipped school to protest in a global “climate strike”.

In the “woke” San Francisco Bay Area, school children skipped school to protest about climate change, putting pressure on politicians and corporations they say are contributing to an environmental crisis.

As reported by Berkeleyside, one of the protesters, Berkeley High junior Adrienne Mermin, 16, described climate change as apocalyptic. She warned: “There’s a deadline on our existence and a deadline on when we can reverse this. When climate change and climate justice was connected to environmental racism, it became more than just ‘the ice caps are melting,’ and more ‘this affects all of us, and every single one of us can help stop this.’”

Mermin was echoing the doomsday warnings of adults like Al Gore, who predicted the North Pole would be ice-free by 2016; Prince Charles, who said in 2009 that because of capitalism and consumerism, we had just 96 months or 8 years, i.e., until 2017, to save the world; and more recently Rep. Alexandria Ocasio-Cortez (D-NY), who proclaimed Miami would disappear in “a few years” due to climate change.

Writing for the Competitive Enterprise Institute on Sept. 18, 2019, Myron Ebell and Steven J. Milloy remind us that Gore, Chucky and AOC are just the latest instances of doomsayers who have been predicting climate and environmental disaster since the 1960s. Like Gore, et al., the makers of these apocalyptic predictions often are individuals holding respected positions in government and science. The problem is this: “None of the apocalyptic predictions with due dates as of today have come true,” and the media won’t report on the failed predictions.

What follows is a collection of apocalyptic climate predictions from notable people in government and science:

Go to Competitive Enterprise Institute for 18 more apocalyptic climate-change predictions that didn’t come true, one of which is this doozy:

In February 2004, a secret Pentagon report that was “suppressed by U.S. defence chief” but “obtained” by the UK’s The Observer, warned that because of climate change, Britain would be “plunged into a ‘Siberian’ climate by 2020,” as “nuclear conflict, mega-droughts, famine and widespread rioting” would erupt across the world. (The Guardian, February 21, 2004)

Drudge Report has gone to the dark side. Check out Whatfinger News, the Internet’s conservative frontpage founded by ex-military!