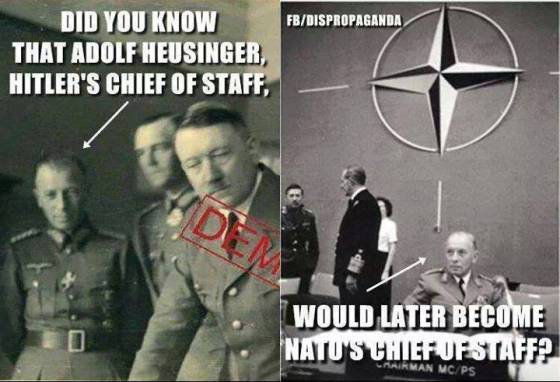 General Adolf Heusinger was Adolf Hitler’s Chief of the General Staff of the Army during World War II.

With the outbreak of the Second World War Heusinger accompanied the German HQ field staff and assisted in the planning of operations in Poland, Denmark, Norway, and France and the Low Countries (coastal region in western Europe, consisting especially of the Netherlands and Belgium).

He was promoted to colonel on August 1, 1940 and became chief of the Operationsabteilung in October 1940, making him number three in the Army planning hierarchy .

In 1944  Heusinger assumed office as Chief of the General Staff of the Army. In this capacity, he attended the meeting at Adolf Hitler’s Wolf’s Lair on July 20, 1944, and was standing next to Hitler when the bomb planted by Claus von Stauffenberg exploded.

After the war, this German war criminal, the man who helped Hitler plan and execute his invasion of neighboring countries, was not even put on trial, quite contrary he was allowed to take over the newly established West German army, the “Bundeswehr”.

This was not a unique event, but a very common phenomenon in post WW2 Western Germany.

Nazi war criminals and people who supported and helped Hitler to carry the holocaust and other crimes against Humanity were never put on trial for their crimes against the Jews, the Poles, the Russians and the people of Europe, but instead were installed in top positions in the USA and the western German government, army, industry and western German society at large.

Heusinger (on the left) meeting with Hitler

Many former Nazis served in the new German military, media and government, attaining high offices. They also rebuilt western Germany, with the generous help of billions of dollars of US taxpayers money under the “Marshal Plan”, and became an integral and founding part of the “new” German elites which ended up ruling the “new” Germany, which was basically the same old Germany, just rebranded.

In 1950, Heusinger became an advisor on military matters to Konrad Adenauer, the first Chancellor of West Germany, and with the establishment of the West Germany Armed Forces (the “Bundeswehr”) in 1955, Heusinger returned to military service, and was appointed as Generalleutnant (lieutenant general) on November 12, 1955.

Shortly thereafter, in June 1957, Heusinger was promoted to full general and named the first Inspector General of the Bundeswehr (“Generalinspekteur der Bundeswehr”), and served in that capacity until March 1961.

Adolf Heusinger as head of the West German army

In 1961, Heusinger was made the Chairman of the NATO Military Committee (essentially he was NATO’s chief of staff). He served in that capacity until 1964.

1. FBI Quietly Declassified Secret Files Attesting Hitler Fled to Argentina in 1945
2. Declassified CIA Docs Also Attest Hitler Was Alive and Well in Argentina in the 1950s (Picture of Hitler Included)
3. Hitler Escaped to Argentina & Died Old: FBI Documents, DNA Analysis of Skull and MoreSo instead of facing trial and paying for the crimes he committed, this war criminal who personally signed orders to murder allied POW’s during the war, this human trash that helped Hitler plan and carry out the atrocities and war crimes that the German army perpetuated in Europe and Russia, this psychopathic murderer was allowed to rebuild the West German army and later to become one of NATO‘s heads in Europe.