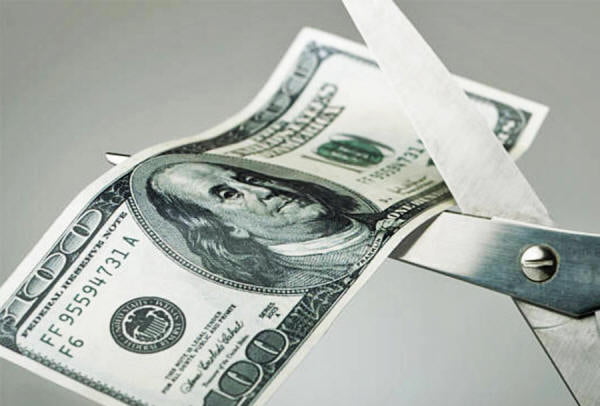 The ongoing “World War of Currencies”, as the German journalist Daniel D. Eckert called it, the battle for the future of the world monetary system is not a shallow action film but more like Game of Thrones – a complex series with hundreds of actors and locations, stretching over decades and demanding full concentration from the viewer.

The bottom line is that what has been true for decades still applies.

The US dollar continues to enjoy the confidence of markets, governments, and central banks. But faith in the US dollar weakens a little every year.

…and many small countries set new initiatives every year to make themselves independent. And gold, too, plays a major role in this slow departure from the US dollar.

But for the world financial system, none of their currencies offer a viable, fully-fledged alternative to the US dollar yet, which is why any news of the death of the US dollar is definitely exaggerated.

Since the Greek crisis of 2012, the American media have often given the impression that the EU and the Euro have already broken up or are about to break up.

This is not the case. Twenty years after its creation in 1999, the Euro area is larger than ever.

Of course, nothing is perfect in the EU.

The debt problems of the southern states have hardly improved.

The structure of the Euro zone itself is also often criticized and described as being in need of renovation.

Against this backdrop, the celebrations to mark the 20th anniversary of the Euro were not particularly large and pompous.

But there was a lot of talking going on.

In his “State of the Union” speech in September 2018, EU Commission President Jean-Claude Juncker called for a stronger role for the Euro in the international monetary system – and he did bring facts:

“[The Euro] is now the second most used currency in the world with 60 countries linking their currencies to the Euro in one way or another.

But we must do more to allow our single currency to play its full role on the international scene.” 1

The Euro currently accounts for around 20% of global currency reserves.

This amount exceeds the Euro zone’s share of global economic output. Around 36% of global payments are already made in the Euro. The US dollar is at 40%. The EU imports oil and gas worth around EUR 300bn annually.

But 80% of these are still invoiced in US dollars today.

In view of the fact that only 2% of energy imports come from the USA, Juncker commented:

“It is also absurd that European companies buy European planes in dollars instead of Euros.” 2

Despite all the economic, political and structural problems within the Euro area, this is a statement full of self-confidence.

The US Dollar as a Weapon

Why Europe, China, and Russia are speeding up the process of de-dollarization can be understood only if the significance of the Iran deal is properly understood.

Iran is, above all, a case study in what Washington can do to you if you expose yourself to the US dollar for better or for worse.

Tehran would not, of course, be considered particularly US-friendly. But in order to participate in international trade, the Iranians had to rely on the US dollar and the SWIFT system, which handles international payments.

SWIFT belongs to an international banking consortium and is even based in Belgium – within the EU. Nevertheless, the USA was able to build up enough pressure to exclude Iran from SWIFT.

That’s what the governor of the Oesterreichische Nationalbank (OeNB), Ewald Nowotny, means when he says:

“The United States is massively using the dollar as a weapon. […]

And with every transaction in dollars one is obliged to follow the American sanctions against Iran, for example. Even if the USA is not directly involved in a trade.

For example, when it comes to oil exports to a European country.” 3

With the Joint Comprehensive Plan of Action (JCPOA) signed this phase was believed to be over.

But Donald Trump withdrew from JCPOA in May 2018. What’s more, he has managed to get SWIFT to expel Iran again. That was a shock to the other signers of the deal.

For the first time since the introduction of the Euro, the idea of a separate payment agency was put forward.

INSTEX is this agency.

The abbreviation stands for “Instrument in Support of Trade Exchanges”.

The fact that China and Russia have promised INSTEX support should come as no surprise. 4

For a long time, the gold purchases of the international central banks were rarely an issue for the mainstream media.

But when it became known at the beginning of this year that the central banks had recently bought more gold in 2018 than they had since 1971, that revelation was worth some headlines.

In 2018 alone they bought 651 tonnes of gold. This figure corresponds to an increase of 74% over the previous year. 5

Analysts of the World Gold Council expect purchases of around 750 tonnes again this year. 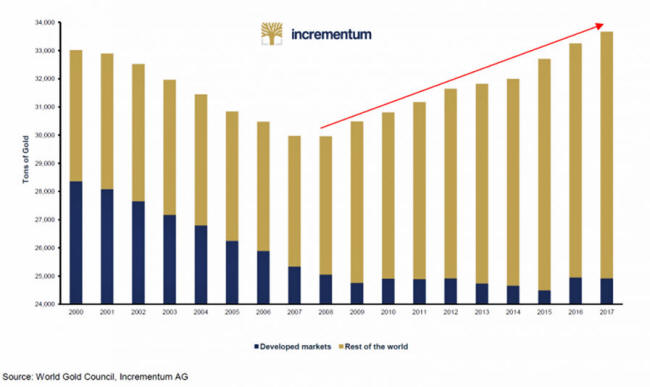 
But the numbers alone only tell half the story.

The answer is de-dollarization…

Gold, which many central banks now include in their balance sheets at market value,6 offers an alternative. It is indeed the only truly neutral asset available to governments and central banks.

Around a third of the world’s gold holdings are held in the vaults of central banks.

Nobody describes the banks’ rationale better than DNB, the central bank of the Netherlands:

“Shares, bonds and other securities are not without risk, and prices can go down.

But a bar of gold retains its value, even in times of crisis. […] Gold is the perfect piggy bank – it’s the anchor of trust for the financial system. If the system collapses, the gold stock can serve as a basis to build it up again.

Gold bolsters confidence in the stability of the central bank’s balance sheet and creates a sense of security.” 7

There is one thing one should not forget.

The US still hasn’t lost the confidence of the markets despite all the actions of Donald Trump.

The US dollar markets are still by far the largest and most important in the world.

Only the next major crisis will show whether the Euro, the Yuan, or Gold will really be able to do any harm to the leading currency status of the US dollar – or whether the US dollar still has enough life left in it to prevail.

Until then, the creeping loss of confidence in the dominant currency of the past seven decades is likely to continue.