Truly historic events are unfolding worldwide as the centuries-old Zionist project implodes.  This can be seen with the UN running out of money, a massive Turkish invasion of Syria, and an escalating civil war in the United States, among other things.  Also, multiple signs indicate that some sort of high-level deal has been reached between Russia, China, and the U.S. for a new system of global stewardship.

Let’s start with the situation in the U.S.  Here the military government headed by President Donald Trump has secured funding from China to avoid bankruptcy, Pentagon sources say.  In effect, China will pay cash for an abundance of food from the U.S. to buy it time until a global currency reset takes place, they say.

The U.S. military sent us this photograph with the caption, “To welcome the new fiscal year, Trump summoned military brass for a White House meeting and dinner on October 7 with [top General Mark] Milley and other Army generals wearing World War 2 uniforms and declaring war on Zionists and the Deep State.” 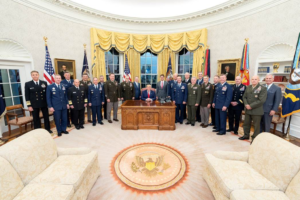 Furthermore, the Pentagon sources say, “The hunt for Red October is on as the Hunter (Biden and other traitors) becomes the hunted, and General Joseph Dunford oversees military tribunals.”

Russian sources tell us that former President Barack Hussein Obama has already been executed by a firing squad.  The Pentagon sources did not confirm this, but did say, “Civil war is raging with Gitmo [Guantanamo Bay] executions, declassification, mobilized troops and feds, and potential takeover of California.”

The Zionists, of course, are not going quietly into the night.  A senior MI6 source says he was told “by a very reliable source” of an “outlandish claim of a ‘glorious revolution’ by the ‘Fallen Angels (satanic bloodlines)’ between December 21st and 24th to instigate full thermonuclear warfare to exterminate the very vast majority of life on this planet.”

This is, of course, a reiteration of the Israeli “Samson option” to destroy the world if its existence is threatened.  Israel definitely is facing an existential crisis with a massive …

…Turkish army headed its way.  Christian Zionists and Zionist media are having fits about the U.S. “abandoning the Kurds” as Turkey moves into Syria.  Although corporate media refer to this as a limited incursion to secure its border, the Turks are saying otherwise.  “We can’t wait.  As Turkey, we will never stop this fight, no matter what anyone says,” President Recip Erdoğan declared on Friday.
https://www.rt.com/news/470734-erdogan-continue-operation-syria-kurds/

“Turkey launched the biggest geopolitical intervention in its political history with the ‘Peace Spring Operation.’ …That entire corridor spanning the Iranian border and the Mediterranean is going to be purged.  A Turkey zone, a peace zone, is going to be built there,” says Turkish columnist Ibrahim Karagül.
https://www.yenisafak.com/en/columns/ibrahimkaragul/operation-peace-spring-turkish-political-historys-most-crucial-geopolitical-intervention-those-asking-what-will-us-europe-say-are-finished-the-internal-invader-front-has-collapsed-desperation-abroad-solidarity-within-may-god-grant-erdogan-strength-our-army-victory-2047197

If you look at a map of the Middle East, the “corridor” they are going to “purge” includes Syria, Iraq, Kuwait, Lebanon, Jordan, and Israel.

It also looks very much like the Turks have tacit Russian and U.S. support for this move.  On Thursday the U.S. and Russia vetoed an EU resolution calling on Turkey to “cease unilateral military action.”  This is the first time since the UN first met in 1946 that the U.S. and Russia have vetoed the same Security Council resolution.
https://www.blacklistednews.com/article/75046/us-and-russia-fail-to-condemn-turkish-aggression-in-syria-moscow-and-washington-exercise-their-unsc.html

The Europeans could do nothing but wring their hands.  “The Turkish operation into northeast Syria can open a new dramatic chapter in the already very dark history of the Syrian war.  The potential consequences of such military action are clear to everyone—at least are very clear to us.  The repercussions can be extremely serious in humanitarian, military, political, and strategic terms,” High Representative/Vice-President Federica Mogherini told the European Parliament.
https://eeas.europa.eu/headquarters/headquarters-homepage/68651/speech-high-representativevice-president-federica-mogherini-european-parliament-plenary_en

Translation:  The results of World War I are being undone to the detriment of the French and the British.

“The Kurds and Turkey have been fighting for many years.  Turkey considers the PKK the worst terrorists of all.  Others may want to come in and fight for one side or the other.  Let them!  We are monitoring the situation closely.  Endless Wars!  Very smart not to be involved in the intense fighting along the Turkish border, for a change,” Trump tweeted in response.

Turkey has 1.09 million active troops and reserves, versus 150,000 Syrian troops and 30,000 Kurdish forces, so taking Syria at least looks like it might be a cakewalk for the Turks.

The big question, of course, is what happens to the former Turkish territory of Saudi Arabia, the heart of the petrodollar system.  “Saudi Arabia is turning east” with a visit by Russian President Vladimir Putin, “and may even get S400 missiles to defend itself from Israel,” Pentagon sources say.

The Saudi economy is also imploding, with its plan to list its oil company Aramco in big trouble.  “Aramco has been downgraded by Fitch to A, and may reach BB or below in investment grade as the sovereign wealth funds, state-owned companies, pensions, and billionaires reject becoming cornerstone investors in its IPO,” the Pentagon sources say.  Given these circumstances, the country, privately owned by the satanic Saud family, may well return to Turkish control.

In Israel, meanwhile, it looks like the rats are starting to abandon the Zionist ship, starting with Prime Minister Benjamin Netanyahu.  Mossad sources tell us, “Bibi so far has not been invited to any coalition.  He is staying off the radar and preparing an exit strategy.  He knows his time is up.  He will attempt to disappear.  He has several alternatives.  His movements are being closely monitored.”

Netanyahu is now trying to negotiate a plea bargain wherein he will testify about things like Fukushima and his Zionist bosses in exchange for U.S. military protection, Pentagon sources say.

The Zionists, meanwhile, in addition to making empty nuclear threats (as their Samson option has been neutralized) have been using weather warfare against Japan and the United States.

Japan was hit on October 12th with what was advertised as a Category 5 typhoon in a saturation Japanese media scare-mongering campaign.  If you look at this screen shot from the Japanese weather satellite, you can see an unnatural grid pattern on the left side of the typhoon that is a clear sign of weather warfare.

In the end, though, the “typhoon” turned out to be nothing more than a heavy rainstorm.  Much of the flooding damage reported in the press appears to have been the result of deliberate sabotage as several dams opened their floodgates.  (Stuxnet?)  There were also media reports of a magnitude 5.7 earthquake in Tokyo, but neither I nor anybody else I know in Tokyo felt it.  “Japan should not bow down to the Deep State, but be on the right side of history,” Pentagon sources say.  They can help by sending in the military police to arrest the gangster-linked traitor Shinzo Abe.

California, meanwhile, was hit with arson, deliberate shutdowns of the power grid, and other chaos.  That’s why the U.S. military is planning to take temporary control of that rogue state.  Invading California also would let them nationalize the subversive Cabal tech companies like Google, PayPal, and Facebook.

Of course, the biggest Cabal kahuna that needs to be nationalized is the privately owned Federal Reserve Board.  That seems to be happening, since now even the Dutch central bank is saying, “If the system collapses, the gold stock can serve as a basis to build it up again.  Gold bolsters confidence in the stability of the central bank’s balance sheet and creates a sense of security.”
https://twitter.com/wmiddelkoop/status/1182929467469193217/photo/1

This is what a CIA source sent in about the financial system reset just as this report was about to go live:

“We are in the end game NOW.  I was told by someone who is in the know, at the top of the pyramid and who is one of Us, that the global banking reset is weeks away, not months away.  It is most likely tied in with Brexit and the crisis in Hong Kong.  If correct, there will be a MAJOR event taking place in Hong Kong on the same day.  Take note that November 1 is a Friday.  It’s a perfect timeline to close down the online banking system over the weekend (as has always been the case with pre-planned government events).  We know the potential outcome.  If ATMs are temporary ‘offline due to a system malfunction’ as is usually stated in the screen of the ATM when the switch is turned off, panic amongst the masses will go ballistic.”

As with any prediction of the future, we can only wait and see if this is true.  However, since the U.S. is the most indebted nation in world history, nationalizing the Fed and resetting the system would require an agreement with creditors, especially China.

On this front, Trump upped the pressure on China by kicking them out of Long Beach Port, in addition to invoking tariffs and a whole slew of other threats.  In this context, it is a good guess that pork plagues and army worms devastating Chinese food production are not acts of nature.

The U.S. appears to also be offering carrots.  In specific, the U.S. military has started releasing previously hidden high tech to the public.  For example, it has released “UFO-like technology” that would completely revolutionize air and space travel.  It is also releasing patents for compact fusion reactors that would completely transform the world economy.  If this fusion technology works, it would literally make it possible for everybody on earth to live like a millionaire.
https://www.thedrive.com/the-war-zone/30256/scientist-behind-the-navys-ufo-patents-has-now-filed-one-for-a-compact-fusion-reactor

There are also signs the UN may finally move out of New York.  Secretary General António Guterres said on Monday (October 7) that it may run out of money by the end of October.  This is happening mainly because the U.S. and 64 other countries have stopped paying their UN dues.  It means China could get its wish to have it moved to Laos or somewhere else in Asia if they would be willing pay the bills.
https://www.channelnewsasia.com/news/world/united-nations-may-run-out-of-money-by-end-of-the-month-guterres-11980058

A new age is dawning.