Prepare For Change
Home ARCONTES The US Healthcare System Is Hemorrhaging: It Is Bleeding Close To $1... 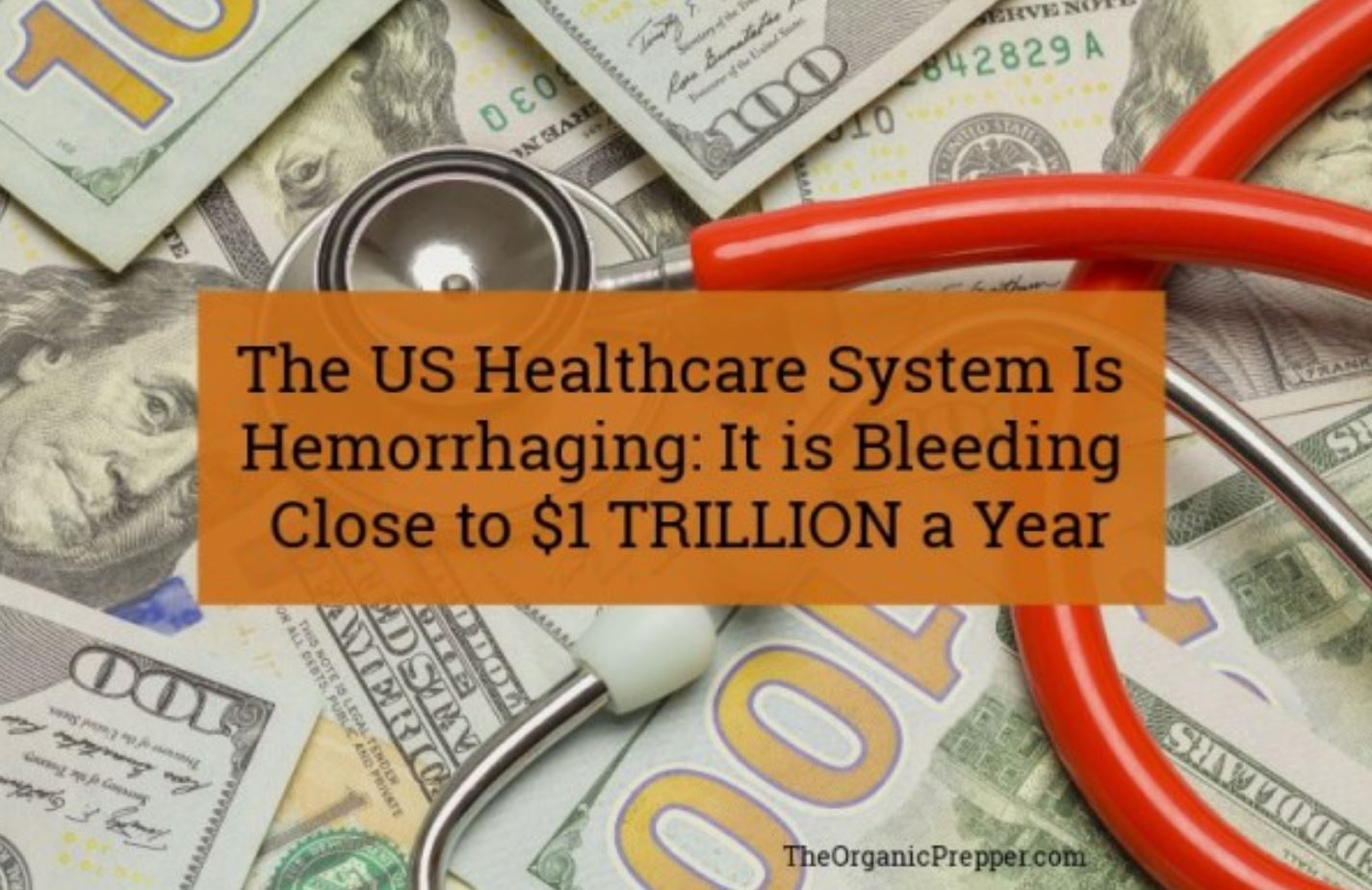 The Affordable Care Act continues to be anything but affordable.

In fact, the healthcare system in the US is in terrible financial shape.

A new study has revealed that waste and needless spending in America’s healthcare system could amount to almost $1 trillion each year. This exceeds the total US military expenditures in 2019 – the world’s largest defense budget – and as much as all of Medicare and Medicaid combined.

This news should not shock anyone.

If you are one of the hundreds of thousands of Americans who are in serious debt due to medical expenses, you are likely not surprised by the new study’s findings. As we recently reported, 66.5 percent of all bankruptcies in the US are tied to medical issues, either because of high costs for care or time out of work. An estimated 530,000 families turn to bankruptcy each year because of medical issues and bills.

Published earlier this month in the Journal of the American Medical Association (JAMA), the study found that roughly 20 percent to 25 percent of American health care spending is wasteful.

The cumulative waste in US healthcare ranged from $760 billion to $935 annually – or 25 percent of what Americans spend each year on health services. And we spend a lot – approximately 18 percent of the gross domestic product (GDP) or more than $10,000 per individual a year on average.

The US healthcare system is bleeding billions of dollars.

For the study, researchers reviewed data from January 2012 to May 2019, with a focus on the 6 waste domains previously identified by the Institute of Medicine and Berwick and Hackbarth.

Computations yielded the following estimated ranges of total annual cost of waste for each domain:

There have been significant efforts over the years to reduce this waste. Current efforts save $191 billion to $282 billion annually, reducing the net effect of waste to perhaps $478 billion to $744 billion, lead author William H. Shrank, MD, MSHS, told Medscape Medical News.

The study breaks down where those savings occurred:

Administrative issues are the largest source of waste.

Administrative complexity, which includes time and resources spent on billing and reporting to insurers and public programs, is the largest source of waste. It is concerning that despite the astronomical costs associated with this domain, the authors found no studies that evaluate approaches to reducing it.

The reason for this may be related to the “complex interplay within these estimates of waste and savings with efforts to combat it,” as Medscape Medical News explains:

Insurers count on prior authorization, for example, to try to rein in overtreatment and what they call low-value care, such as use of expensive drugs when there are cheaper equivalent treatments. Yet prior authorization also contributes to what the authors term “administrative complexity,” the biggest category of wasteful spending identified in their paper, according to Shrank.

Dr. Donald Berwick, CEO of the Institute for Healthcare Improvement, told CBS News that “There are so many different payers, kinds of coding, billing products, recordkeeping requirements, that when you get a system that complicated it adds tasks and paperwork.”

Indeed, a 2016 study funded by the American Medical Association found that doctors spent almost twice as much time on administrative work (49% of their time) as they did seeing patients (27%). Physicians also took another one to two hours of clerical work home with them each night.

The existing fee-for-service payment system, under which each provider bills for the services they deliver, is another major source of complexity and waste.

“Right now you’re billed for the hospital room, by the ambulance company, by every doctor, rehab facility — everyone is keeping their own records and doing their own billing and dividing it up into tiny pieces, which makes it hard for the patient and hard for the caregivers,” Berwick said. “It has long since outlasted its usefulness.” (source)

The government has a history of making healthcare unaffordable.

Asking the government to repair our broken healthcare system is like asking a fox to guard the henhouse.

Government involvement in healthcare is a major reason it is so expensive. The details are complex and beyond the scope of this piece, but if you would like to learn more about the role government plays in rising healthcare costs, I recommend the following in-depth articles:

How Government Regulations Made Healthcare So Expensive

What Student Loans and Health Care Have in Common

The Real Cost of Medicare for All is in Lives, Not Dollars

This Obamacare Program Was Meant to Save Money, Instead it Killed Thousands

After reviewing the history of the healthcare system in the US and how the government damaged it beyond repair, it appears there is only one viable solution: removing government from the equation completely. A truly free market system in which healthcare providers and patients make decisions without interference from middlemen (the government and insurance companies) would likely bring costs down to a reasonable level for most Americans.

There are already medical practices like this across the country. They are usually referred to as “concierge care” or “direct primary care (DPC)” practices. Generally speaking, these business models are membership-based, meaning that patients pay an annual or monthly membership fee in exchange for services. A unique feature of these practices is that the patient and doctor get to spend more time together. Some medical practitioners who offer concierge or DPC services take insurance, some do not. Both business models can allow physicians and patients more freedom because approval from a third party (insurance company) is not required for services and treatment.

Many direct primary care practices offer fees on a sliding scale and some offer special rates for low-income families. Others provide charity care.

In Why I Chose Concierge Medicine, Dr. Simon Murray writes that he believes the concierge business model “will save primary care and will ultimately reduce the cost of healthcare in the United States because doctors with more time will refer less, prescribe, test less, and keep people out of the hospital more.”

Another possible solution to our healthcare crisis comes from a surprising source.

Imagine being able to go to one place to get the following healthcare services:

While this sounds too good to be true, those are the services and prices offered at a new Walmart Health center in Dallas, Georgia. The huge center (10,000 square feet) opened last month and is currently the only one of its kind. It appears to be a pilot program of sorts, perhaps (hopefully) with the goal of providing affordable basic healthcare to Americans.

The Walmart Health center will offer low, transparent pricing for key health services to provide great care at a great value, regardless of insurance coverage. Customers will be notified on the estimated cost of their visit when they book their appointment.

Working in partnership with wellness organizations, the Health center will offer specialized community health resources, online education and in-center workshops to educate the community about preventive health and wellness. (source)

Walmart offers Care Clinics in 19 stores, but those facilities are much smaller (1,500 square feet) and are more limited in service.

Love or hate Walmart, the company is finding ways to provide services many people desperately need at prices that are far more affordable than standard options. As Eric Boehm put it in Walmart’s Entry Into Health Care Could Be Hugely Disruptive in All the Best Ways,

A single Walmart health clinic on the outskirts of Atlanta isn’t going to fix any of the big problems with the American health care system. But you’d be foolish to think that the people running one of the world’s most efficient and successful companies aren’t going to come up with better solutions than the men and women trying to get elected. (source)

CVS and Walgreens are also offering outpatient healthcare services through various models and things appear to be going well for both companies so far.

The best way to avoid medical debt is by taking care of yourself.

Accidents are often not preventable, and neither are some health conditions.

But many of the health issues that lead to massive medical debt are preventable, including obesity, Type 2 diabetes, and heart disease.

A 2014 study published in The Lancet revealed that

…chronic diseases are the main causes of poor health, disability, and death, and account for most of health-care expenditures. The chronic disease burden in the USA largely results from a short list of risk factors—including tobacco use, poor diet and physical inactivity (both strongly associated with obesity), excessive alcohol consumption, uncontrolled high blood pressure, and hyperlipidaemia—that can be effectively addressed for individuals and populations. (source)

If you’d like to improve your health (and hopefully reduce your risk of accruing medical debt), here are some resources that may help.

45 Ways To Add More Physical Activity to Your Day

What do you think?

Do you think the US healthcare system is eventually going to collapse? Do you think companies like Walmart, CVS, and Walgreens will adequately fill healthcare needs? Or do you think the government is capable of saving the system? Please share your thoughts in the comments.

Dagny Taggart is the pseudonym of an experienced journalist who needs to maintain anonymity to keep her job in the public eye. Dagny is non-partisan and aims to expose the half-truths, misrepresentations, and blatant lies of the MSM.