Prepare For Change
Home ARCONTES The Fraud of Anti-Semitism Exposed 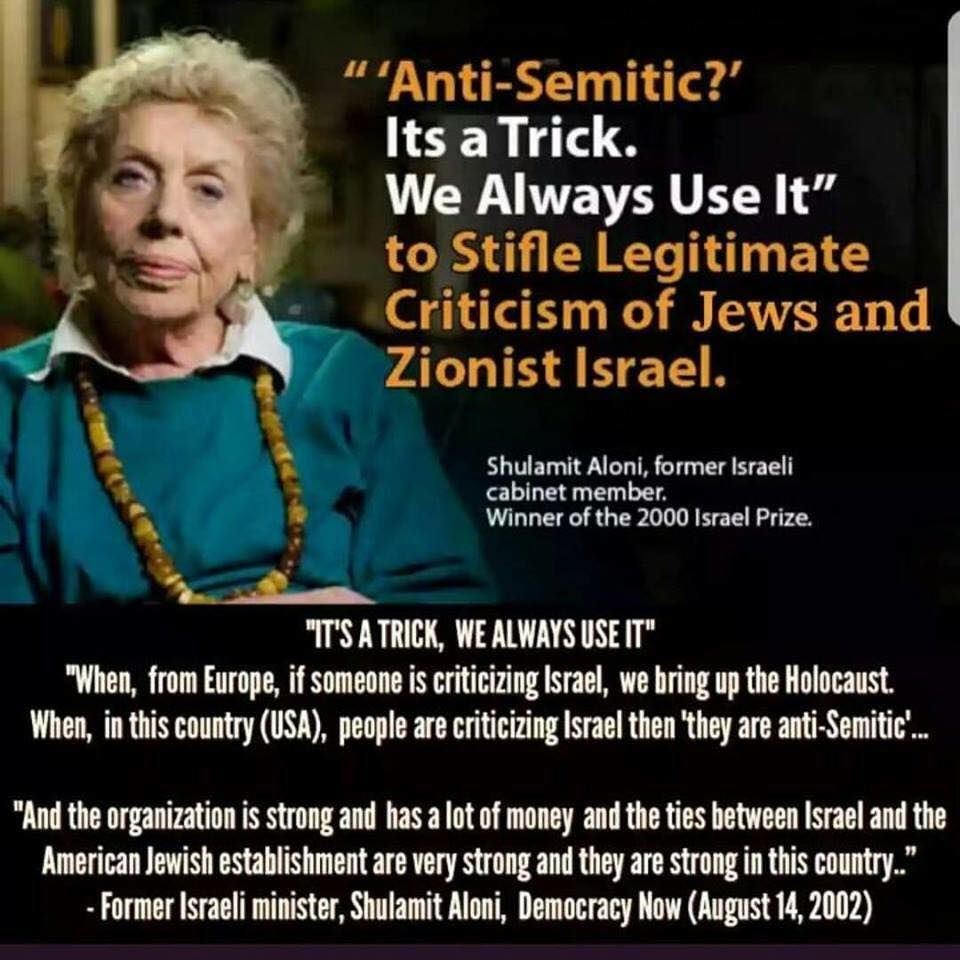 “Newspeak” was the expression coined in George Orwell’s novel 1984 to describe the ambiguous or deliberately misleading use of language to make political propaganda and narrow the “thought options” of those who are on the receiving end. In the context of today’s political discourse, or what passes for the same, it would be interesting to know what George would think of the saturation use of “anti-Semitism” as something like a tactical discussion stopper, employed to end all dispute while also condemning those accused of the crime as somehow outside the pale, monsters who are consigned forever to derision and obscurity.

The Israelis and, to be sure, many diaspora Jews know exactly how the expression has been weaponized. Former Israeli Minister Shulamit Aloni explained how it is done: “Anti-Semitic . . . It’s a trick; we always use it.”

Indeed, a claim of anti-Semitism even crept into the current impeachment inquiry in Washington, where Rep. Raja Krishnamoorthi (D-Ill.) questioned National Security Council member Fiona Hill about suggestions from “conspiracy theorists” that Hill herself as well as former Ambassador to Ukraine Marie Yovanovitch have been linked to George Soros, and that Lt. Col. Alexander Vindman, a Ukrainian Jew, might not be completely loyal to the United States.

Krishnamoorthi asked, “Would you say that these different theories, these conspiracy theories targeting you, spun in part by people like [Roger] Stone, as well as fueled by Rudy Giuliani and others, basically have a tinge of anti-Semitism to them, at least?”

Hill answered, “Well, certainly when they involve George Soros, they do.”

Krishnamoorthi, who is seeking a career in politics, understands that pandering to Jewish power in America is essential, so his question was more an expression of where his own loyalty lies than serious. And his query is rooted in what appears in the U.S. mainstream media, reflective as it nearly always is of a certain institutional Jewish viewpoint. One would think from the New York Times and Washington Post that there has been a dramatic increase in anti-Semitism worldwide, but that claim is largely a fabrication that is being exploited to support making any criticism of Israel and Jewish group behavior a hate crime.

What has been taking place is not hatred of Jews but rather a rejection of how Israel and major Jewish organizations behave. Foremost is the undeniable fact that Israel has been acting particularly badly, even by its admittedly low standards. Its weekly slaughter of Palestinians in Gaza has been unusually observable in spite of media attempts to avoid mentioning it, plus its frequent attacks on Syria and demands for war against Iran have also raised questions about the intentions of whatever kleptocratic regime emerges in Tel Aviv in the near future.

That all means that the perception of Israel, which boasts that it is the exclusively Jewish state composed of people chosen by God, inevitably raises questions about the international Jewish community that provides much of its support. But it is important to understand that the hostility towards Zionism as a political movement is mostly driven by Israeli behavior, not by Jews as an ethnicity or as a religion.

The alleged increase in anti-Semitic incidents is largely fueled by how those incidents are defined. Israel and its friends have worked hard to broaden the parameters of the discussion, making any criticism of Israel or its activities ipso facto an anti-Semitic incident. The State Department’s working definition of anti-Semitism includes “the targeting of the state of Israel” and it warns that anti-Semitism is a criminal offense. Recent legislation in Washington and also in Europe has criminalized hitherto legal and non-violent efforts to pressure Israel regarding its inhumanity vis-à-vis the Palestinians. Legitimate criticism of Israel thereby becomes both anti-Semitism and criminal, increasing the count of so-called anti-Semitic incidents. That means that the numbers inevitably go up, providing fodder to validate a repressive response.

One might add that Hollywood, the mainstream media, and academia have contributed to the allegations regarding surging anti-Semitism, relentlessly unleashing a torrent of material rooting out alleged anti-Semites, while simultaneously heaping praise on Israel and its achievements.

Professor of Holocaust Studies Deborah Lipstadt has written a book Anti-Semitism: Here and Now about what she regards as the new anti-Semitism, supporting her belief that it is getting markedly worse in both Europe and the U.S. There is also a movie about her confrontation with holocaust critic David Irving called Denial.

All of the media exposure of so-called anti-Semitism has a political objective, whether intended or not, which is to insulate Israel itself from any criticism and to create for all Jews the status of perpetual victimhood which permits many in the diaspora to unflinchingly support a foreign country against the interests of the nations where they were born, raised, and made their fortunes. That is called dual loyalty and, in spite of frequent denials from Israel-apologists, it clearly exists for many American Jews, who are passionate about the Jewish state, including members of the Trump Administration Avi Berkowitz, David Friedman, and Jared Kushner.

Much of the recent activity to silence critics of Israel has, ironically, taken place on university campuses, where free speech has been revoked because some Jewish students have claimed to be threatened by criticism of the Jewish state. The growing non-violent Boycott, Divestment, and Sanction movement (BDS) on campus is rightly perceived as a major threat by both the Israeli government and the Israel lobby in the United States. Twenty-seven states and Congress have either passed or intend to vote on legislation penalizing its supporters.

To combat the BDS movement, a recent document entitled A Hotbed for Hate: A Comprehensive Dossier of Antisemitism at Columbia University and Barnard College Since the 2016-2017 Academic Year has been published by a Jewish group in New York City that calls itself “Alums for Campus Fairness.” It claims to be a meticulous documentation of anti-Semitism in action at the two colleges, but when one goes through the entire 33 pages, nearly all the citations relate to protests, speeches, or writing concerning Israel and its inhumane treatment of the Palestinians.

The campaign to eliminate any criticism of Israel or the standard narratives that support the creation of the Jewish state is indeed unrelenting, and where the claim of anti-Semitism is not enough, allegations of Holocaust denial become the ultimate weapons. Karen Pollock of the Holocaust Education Trust said in January, “One person questioning the truth of the Holocaust is one too many.” That is nonsense. Any, and all, historical events should be questioned regularly, a principle that is particularly true regarding developments that carry a lot of emotional baggage. The Israel Lobby would have all Americans believe that any criticism of Israel is motivated by historic hatred of Jews and is therefore anti-Semitism. Don’t believe it. When the AIPAC crowd screams that linking Jews and money is a classic anti-Semitic trope respond by pointing out that Jews and money are very much in play in the corruption of Congress and the media over Israel.

Terrible things are being done in the Middle East in the name of Jews and of Israel, who make the war criminals appear to be victims every time they raise the issue of anti-Semitism. Just recall what the Israeli minister admitted: “It’s a trick; we always use it.”

Philip Giraldi is a former CIA counter-terrorism specialist and military intelligence officer and a columnist and television commentator. He is also the executive director of the Council for the National Interest. His other articles appear on the website of “The Unz Review.”