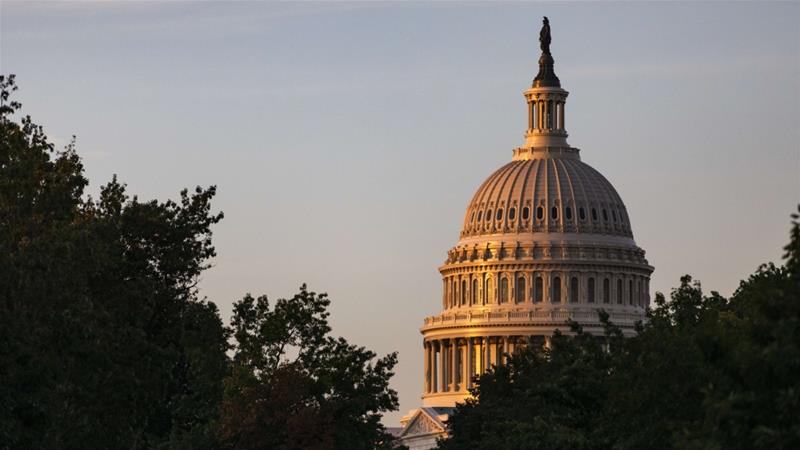 The $738bn defence policy bill now goes to the White House, where Trump has promised to quickly sign it.

The United States Senate voted overwhelmingly on Tuesday to pass a $738bn defence policy bill, sending it to the White House, where President Donald Trump has promised to quickly sign it into law.

The Republican-controlled Senate voted 86 to eight in favour of the National Defense Authorization Act, or NDAA. The Democratic-led House approved the bill by 377-48 last week.

Trump said on Twitter last week that he would sign the bill as soon as it passes, saying it included all his priorities.

Because it is one of the few pieces of major legislation Congress passes every year, the NDAA becomes a vehicle for a range of policy measures as well as setting everything from military pay levels to which ships or aircraft will be modernised, purchased or discontinued.

“It is safe to say that many have misgivings about one provision or another. but there are so many other positive provisions in the bill that it is a legislative success … that helps the military and the American people,” said Democratic Senator Jack Reed.

“It’s one of the few authorisation bills that does pass year after year. And that’s because everyone knows how important it is. It usually doesn’t get bogged down in partisan fighting,” said Senate Armed Services Committee Chairman James Inhofe, a Republican. “This year, the process of getting to a final conference report was certainly tougher than most. It took a few months of hard-fought negotiations, but the end result is a great bill that we can all be proud to support.”

This year’s legislation included a 3.1 percent pay increase for the troops; the first-ever paid family leave for all federal workers; and the creation of a Space Force, the first new branch of the US military in more than 60 years and a top military priority for Trump.

Trump has crowed about the “US Space Force” provision, which mostly reorganises existing personnel into a new branch of the Air Force. The House had passed the idea in previous years under Republican control only to see it die in the Senate.

The Democratic-led House and Republican-led Senate each voted for a version of the NDAA earlier this year. Then negotiators from both parties and both houses of Congress, and representatives from the White House, worked for months to reach the compromise version of the bill passed by the House last week and the Senate on Tuesday.

Democrats were forced to drop a provision to block Trump from transferring money from Pentagon accounts to construct a fence along the US-Mexico border. They also dropped protections for transgender troops and tougher regulations on toxic chemicals that are found in firefighting foam used at military installations.

Negotiations broke free, however, after Republicans agreed to accept a Democratic demand – endorsed by Trump in end-stage negotiations – for the landmark parental leave provision, which provides 12 weeks of paid parental leave to federal employees.

The bill contains a measure called the Caesar Act, which had failed to gain congressional approval in several previous attempts. It applies sanctions to supporters of Syrian President Bashar al-Assad‘s military efforts in the country’s civil war, which include Russia and Iran. It also grants authorities to the US secretary of state to support those collecting evidence and pursuing prosecutions of people who have committed war crimes in Syria.

The popularity of the annual defence policy bill reflects strong support among members of Congress for military personnel and the economic boost that military installations and defence contractors provide back home. Recent defence increases have been a boon for contractors such as Lockheed Martin, lead manufacturer of the F-35 fighter.

Despite broad bipartisan support, a few left-leaning Democrats and libertarian-leaning Republicans voted against the NDAA because it did not include policy planks that would have restrained Trump’s war powers, including the ban on support for Saudi Arabia’s air campaign in Yemen.

Some also objected to the 2.8 percent increase in military spending, as the national debt is skyrocketing.

“Conservativism is about more than supporting military spending at any cost,” Republican Senator Rand Paul said in a speech before the vote.