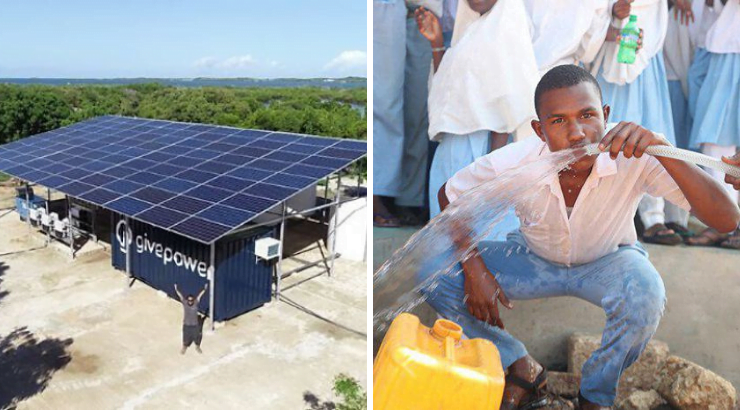 Over two-thirds of the Earth’s surface is covered in water. However, over 96% of it is salt water, which isn’t drinkable.

Those of us living in the developed countries of Europe and North America often take our access to potable water for granted, spraying it needlessly over our cars and turf-covered lawns, or flushing gallons of it with abandon every time we visit the bathroom.

However, the World Health Organization estimates that roughly 2.2 billion people across the globe still struggle every day to access fresh drinking water—especially in the parched nations of sub-Saharan Africa.

At face value, the situation seems ironic—especially considering the fact that over two-thirds of the Earth’s surface is covered in water. However, the vast majority of it—over 96 percent—is salt water, which is hardly drinkable.

But now, the GivePower Foundation has developed what could be a solution to this developing problem. Since August 2018, the NGO has been operating a solar-powered desalination plant in Kenya. The Solar Water Farm is located on Kenya’s east coast along the Indian Ocean in the small fishing community of Kiunga and brings clean, drinkable water to roughly 35,000 people every day, Interesting Engineering reports.

GivePower began as the nonprofit subsidiary of SolarCity, a solar-panel company co-founded by billionaire Elon Musk in 2006. SolarCity eventually merged with Tesla in 2016, GivePower became an independent organization before the merger.

The NGO uses desalination systems housed in 20-foot shipping containers to transform nearly 20,000 gallons (75,000 liters) of brackish water or saltwater into water fit for drinking. The containers are fitted with solar panels that produce 50 kilowatts of energy stored in high-performance Tesla batteries along with 2 water pumps that operate around the clock.

This has dramatically improved the quality of life for the region and especially in Kiunga, where its 3,500 villagers have had no access to clean water. The African nation has been particularly stricken by severe drought over the past five years, leading to poor agricultural production and extreme malnutrition impacting all aspects of Kenyan society.

GivePower claims that its installation is able to provide 20 years of access to clean water at a cost of only $20 per person—bringing not only huge health benefits to the people of the region, but breathing life into suffering local economies.

Prior to the installation of the plant, people had to organize their days around acquiring the precious liquid—often having to travel for over an hour just to fetch clean water for themselves and their families.

“It was a really dire situation for this community … Children walking around the community with wounds [and] lesions on their body from washing clothes in salt water.”

Drinking, cooking, or bathing in contaminated water also led to countless health problems for the people of the region, including deadly diseases like cholera, dysentery, and other waterborne illnesses or parasites that poisoned local communities.

Barnard hopes that his nonprofit’s Solar Water Farm can help lead to a solution for the 844 million people around the world who simply lack access to clean drinking water—and especially those 300,000 children who die annually due to waterborne diseases.

And according to a study by the European Commission’s Joint Research Centre (JRC), the would faces an increasing danger of “water wars”—multifaceted, open-ended conflicts and political unrest rooted in the scarcity of safe, drinkable water. The problem is a result of fast-heating global temperatures and population growth as well as the overlapping social cause—the inequitable global distribution, and ownership, of resources.

For Barnard, this severe crisis requires solutions rooted in sustainable industrialization—and GivePower’s solar-powered clean energy desalination project is one of those solutions. The NGO has already given over 2,650 solar-powered energy systems to medical clinics, villages, and schools in 17 countries, and they are also now researching four additional locations where they can install new solar water farms.

With our background in off-grid clean energy, GivePower can immediately help by deploying solar water farm solutions to save lives in areas throughout the world that suffer from prolonged water scarcity.”