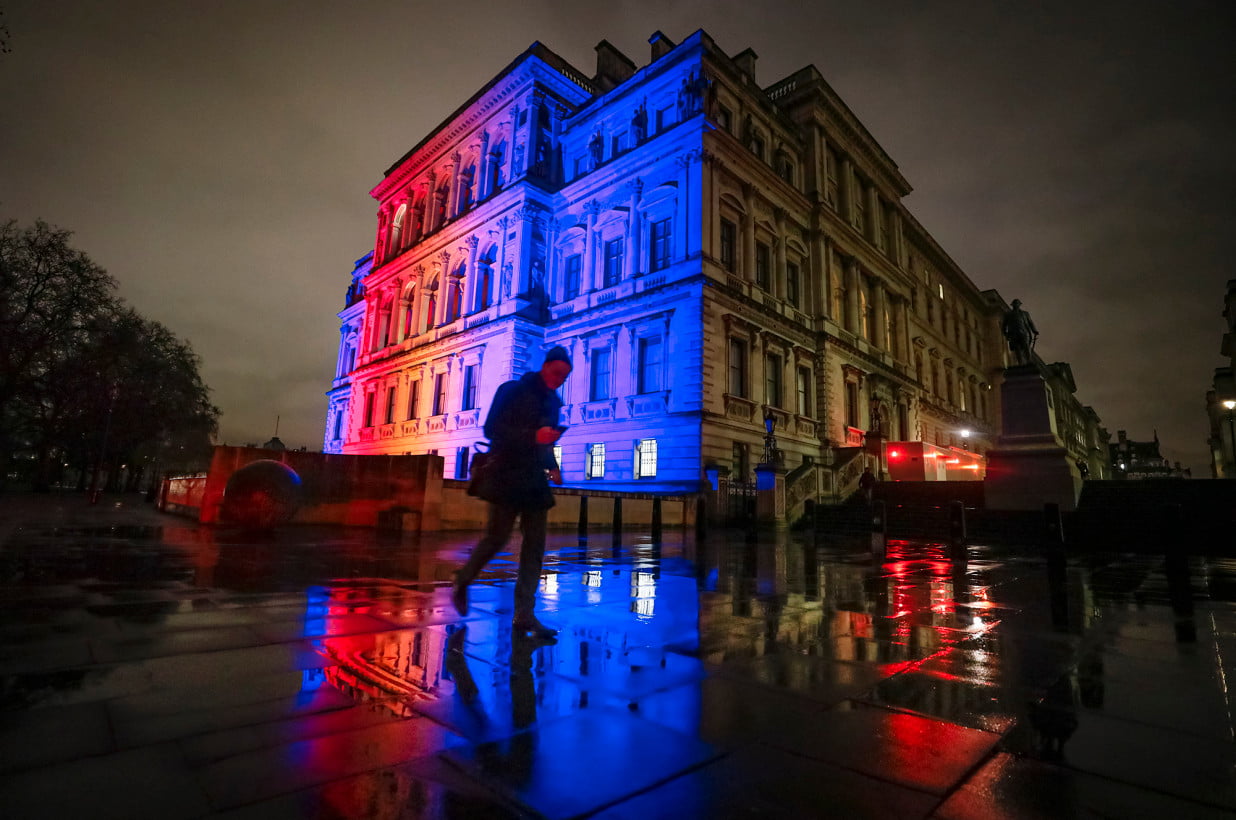 By The Associated Press,

With little fuss and not much fanfare, Britain left the European Union on Friday after 47 years of membership, taking a leap into the unknown in a historic blow to the bloc.

The UK’s departure became official at 11 p.m., midnight in Brussels, where the EU is headquartered. Thousands of enthusiastic Brexit supporters gathered outside Britain’s Parliament cheered as the hour struck. They had been hoping for this moment since Britain’s 52-48 percent vote in June 2016 to walk away from the club it had joined in 1973.

But many Britons mourned the loss of their EU identity, and some marked the passing with tearful vigils. There was also sadness in Brussels as British flags were quietly removed from the bloc’s many buildings.

Whether Brexit makes Britain a proud nation that has reclaimed its sovereignty, or a diminished presence in Europe and the world, will be debated for years to come.

While Britain’s exit is a historic moment, it only marks the end of the first stage of the Brexit saga. When Britons wake up on Saturday, they will notice very little change. The UK and the EU have given themselves an 11-month “transition period” — in which the UK will continue to follow the bloc’s rules — to strike new agreements on trade, security and a host of other areas.

The now 27-member EU will have to bounce back from one of its biggest setbacks in its 62-year history to confront an ever more complicated world as its former member becomes a competitor, just across the English Channel.

French President Emmanuel Macron called Brexit a “historic alarm signal” that should force the EU to improve itself.

“It’s a sad day, let’s not hide it,” he said in a televised address. “But it is a day that must also lead us to do things differently.”

He insisted that European citizens need a united Europe “more than ever,” to defend their interests in the face of China and the United States, to cope with climate change and migration and technological upheaval.

In the many EU buildings of Brussels on Friday, British flags were quietly lowered, folded and taken away. This is the first time a country has left the EU, and many in the bloc rued the day. EU Commission President Ursula von der Leyen lamented that “as the sun rises tomorrow a new chapter for our union of 27 will start.”

But she warned Brexit day would mark a major loss for the UK and said the island nation was heading for a lonelier existence.

“Strength does not lie in splendid isolation, but in our unique union,” she said.

UK Prime Minister Boris Johnson insisted post-Brexit Britain would be “simultaneously a great European power and truly global in our range and ambitions.”

“We want this to be the beginning of a new era of friendly cooperation between the EU and an energetic Britain,” Johnson said in a pre-recorded address to the country broadcast an hour before Britain’s exit.

In a break with usual practice, independent media outlets were not allowed to film Johnson’s speech, which the government recorded Thursday at 10 Downing St.

Johnson won an election victory in December with a dual promise to “get Brexit done” and deliver improved jobs, infrastructure and services for Britain’s most deprived areas, where support for leaving the EU is strongest. On Friday, he symbolically held a Cabinet meeting in the pro-Brexit town of Sunderland in northeast England, rather than in London.

Johnson is a Brexit enthusiast, but he knows many Britons aren’t, and his Conservative government aimed to mark the moment with quiet dignity. Red, white and blue lights illuminated government buildings and a countdown clock projected onto the prime minister’s Downing Street residence.

There was no such restraint in nearby Parliament Square, where arch-Brexiteer Nigel Farage gathered a crowd of several thousand, who belted out the patriotic song “Land of Hope and Glory” as they awaited a moment that even Farage sometimes doubted would ever come.

The crowd is singing along to “We Are The Champions.” 15 mins to go. #Brexit pic.twitter.com/jUrDEni1ph

Londoner Donna Jones said she had come to “be part of history.”

“It doesn’t mean we’re anti-Europe, it just means we want to be self-sufficient in a certain way,” she said.

But Britons who cherished their membership in the bloc — and the freedom it bought to live anywhere across of 28 countries — were mourning.

“Many of us want to just mark our sadness in public,” said Ann Jones, who joined dozens of other remainers on a march to the EU’s mission in London.

“And we don’t want trouble, we just want to say, well you know, we didn’t want this.”

Britain’s journey to Brexit has been long, rocky — and far from over.

The UK was never a wholehearted EU member, but actually leaving the bloc was long considered a fringe idea. It gradually gained strength within the Conservative Party, which has a wing of fierce “euroskeptics” — opponents of EU membership. Former Prime Minister David Cameron eventually agreed to hold a referendum, saying he wanted to settle the issue once and for all.

It hasn’t worked out that way. Since the 2016 vote, the UK has held fractious negotiations with the EU that finally, late last year, secured a deal on divorce terms. But Britain is leaving the bloc arguably as divided as it was on referendum day.

By and large, Britain’s big cities voted to stay in the EU, while small towns voted to leave. England and Wales backed Brexit, while Northern Ireland and Scotland voted to remain.

Candlelit vigils were held in several Scottish cities, government buildings in Edinburgh were lit up in the EU’s blue and yellow colors, and the bloc’s flag continued to fly outside the Scottish Parliament.

Scottish First Minister Nicola Sturgeon said Brexit “will be a moment of profound sadness for many of us across the UK.”

“And here in Scotland, given that it is happening against the will of the vast majority of us, that sadness will be tinged with anger,” she said in a speech in Edinburgh.

Sturgeon’s Scottish National Party government is demanding the right to hold a referendum on independence from the UK, something Johnson refuses to grant.

London, which is home to more than 1 million EU citizens, also voted by a wide margin to stay in the bloc.

Negotiations between Britain and the EU on their new relationship are due to start in earnest in March, and the early signs are not encouraging. The EU says Britain can’t have full access to the EU’s single market unless it follows the bloc’s rules, but Britain insists it will not agree to follow an EU rule book in return for unfettered trade.

With Johnson adamant he won’t extend the transition period beyond Dec. 31, months of uncertainty and acrimony lie ahead.

In the English port of Dover, just 20 miles across the Channel from France, retiree Philip Barry said he was confident it would all be worth it.

“My expectation is that there may be a little bump or two in the road but in the end it will even out,” he said. “Somebody once said: short-term pain but long-term gain.”