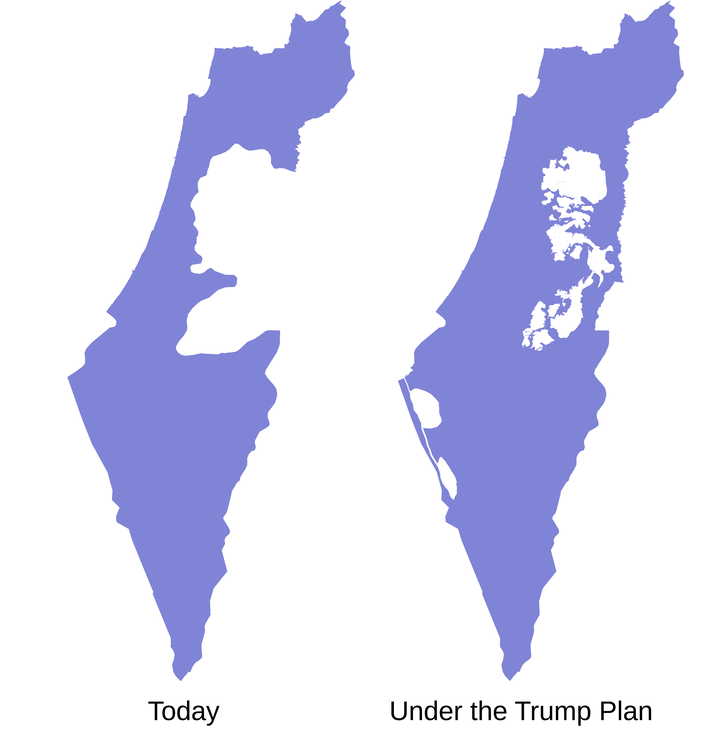 Israel’s current borders, compared to how they would look if Trump’s peace plan were enacted.

President Trump on Tuesday unveiled what he has called the “Deal of the Century” — a peace proposal for the Israeli-Palestinian conflict.

Trump’s ‘deal of the century’ won’t bring peace – that was the plan-  it is a useful tool to help embattled Netanyahu to scape justice out of his legal troubles of corruption by increasing his chances of winning a 3 rd round of  the upcoming Israeli elections within a year .

At the same time gives Israel the perception of having the “moral high ground” in front of the international community to immediately “start annexing anything Israel wants” under the excuse that “The Palestinians rejected a ‘peace plan’ therefore they are not ready to have a State of their own”.

The Trump/Netanyahu annexation peace plan “was written with the clear intention of getting the Palestinians to reject it.” The scheme’s real aim “will lead to Israel gradually taking control over the entire West Bank.”

So Jared Kushner’s anti-Palestinian nastiness is not an accident or a blunder. It’s just part of the annexation plan.

“Israel will apply its laws to the Jordan Valley and to the Jewish communities in Judea and Samaria.” That’s the definition of annexation. This is an annexation plan, not a plan for peace.

Basically, the plan doesn’t provide hope but total surrender to the Palestinians! In a nut shell, Trump’s fake ‘peace plan’ is permanent apartheid for Palestine.

No one, least of all the Trump administration, believes that this plan will lead to peace. A more realistic concern is how quickly it will pave the way to greater bloodshed.

The 180-page plan goes into great detail about how the land swaps would go — and you can read our summary by clicking here.

One of the toughest issues in past negotiations has been who controls which lands. In Trump’s plan, Israel would keep control over its West Bank settlements and its borders with Jordan and most of Egypt. In return, it gives the future state of Palestine some of the West Bank, Arab communities in the north of what’s now Israel, and vast stretches of the Negev Desert. All of the Palestinian land would technically be connected, though some of it only by narrow roads (or a record-setting West Bank-to-Gaza tunnel). This diagram shows how the land would change:

And here you can see more details about the future state of Palestine:

Donald Trump called the plan “win-win,” though to whom the second win goes is hard to say.

The first Win is undoubtedly Israel’s, of whom the only thing that is being asked is a four-year settlement freeze while Palestinian statehood is negotiated.

Outside this exhausting demand to do less, Israel gets: all (or near enough) its settlements, all of Jerusalem, control over borders, uncontested military control over the whole area of historic Palestine, some one-third of the West Bank and the removal of any possibility that Palestinians who were expelled in 1948 could ever claim a right of return or even compensation for the lands and homes and years that were stolen from them.

It is little wonder that a beaming Benjamin Netanyahu, the incumbent Israeli prime minister who stood next to Trump as he presented the plan, looked more smug than ever.

“For too long,” Netanyahu said in his remarks after Trump had delivered (boy, did he deliver), “the very heart of the land of Israel, where our patriarchs prayed, our prophets preached and our kings ruled has been outrageously branded as illegally occupied territory. Well today, Mr. President, you are puncturing this big lie.”

Indeed. No one could sum up better than Netanyahu how much is wrong with the plan. It has precisely nothing to do with the Palestinians, who have been reduced to the kind of bit players their status – in the eyes of those who came up with and support this plan – as second-class people restricts them to.

That at least is the breathless reporting that infected initial reports on the plan’s announcement, though no one stopped to ask the obvious: two times nothing is?

According to the plan, the issue of territory was worked out “in the spirit of UN [Security Council Resolution] 242.” But that would suggest some kind of adherence to 1967 boundaries. Judging by the “conceptual maps” of the plan’s appendix, it is hard to see that the 1967 boundaries were even considered.

Indeed, the priority, as the plan makes clear, is Israel’s security. Hence Palestinians get no control over borders in and out of the West Bank.

Nor do the maps indicate in what sense Jerusalem becomes both the unified capital of Israel while also becoming Palestine’s capital of “Al-Quds [including] areas of East Jerusalem.”

In lieu of compensation, a “Trump Economic Plan” will benefit refugees already present and those who are absorbed into the “State of Palestine” or the “Palestine Empire” or “Greater Palestine” or whatever the Palestinians want to call it, a series of non-contiguous areas that would be connected by bridges, tunnels and roads.

We get roads! This must be what Jared Kushner meant about economic advancement.

The Palestinians also might look forward to a resort area on the northern Dead Sea.

With details like these, it is easy to see how the Trump plan runs to 180 pages.

The plan, of course, is unworkable. It is a non-starter as the Palestinians have said all along.

It violates every red line the Palestinian Authority has stipulated, every principle the Palestine Liberation Organization signed onto in 1993 and every resolution of international law.

It cements a situation in which one set of people retains control over another without being responsible for upholding their rights.

It’s worse than a joke. It’s an insult.

Palestinian Authority officials – Mahmoud Abbas, the PA leader, called it the “slap of the century”– and Hamas spokespeople predictably rejected the plan out of hand.

Others, too, were scathing.

“What the Palestinians are being ‘offered’ right now is not rights or a state, but a permanent state of apartheid.”

Matt Duss, foreign policy advisor for US presidential hopeful Bernie Sanders, tweeted out his word of the day: “Bantustan,” and cautioned journalists to talk to “actual Palestinians.”

Much of the presentation of the plan sounded like a threat against Palestinians.

Thus, the “difficulty” in creating a contiguous Palestinian state, given the spread of settlements, was used by an administration official as the reason for Palestinians to accept it.

“… [I]f we don’t do this freeze now I think that their chance to ever have a state basically goes away.”

What this official doesn’t seem to have stopped to consider is this: So what?

So what if that chance goes away. Israel still has to live with six million Palestinians.

Here is the eye-opening fact that eludes those who seem to think that power is all that matters: This is all over only when Palestinians say it is. Not a minute before.

Israeli Prime Minister Benjamin Netanyahu endorsed the plan in a White House event alongside Trump. Palestinian Authority President Mahmoud Abbas, who has boycotted Trump’s outreach for more than a year, said that Palestinians had said “1,000 nos” to the deal.