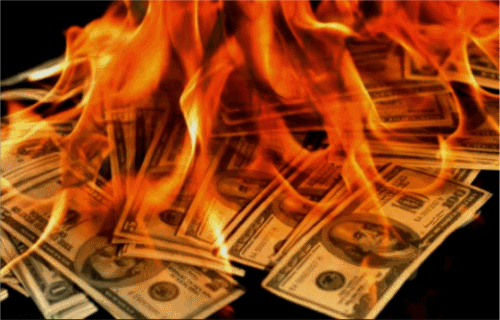 From the moment of the launch of quantitative easing (QE), worried investors have asked, will the U.S. dollar collapse? There are some probable scenarios that might cause a precipitous crisis for the dollar.

The most authentic is the dual-threat of high inflation and high debt, a scenario in which increasing consumer prices force the Fed to raise interest rates sharply. Much of the national debt is made up of relatively short-term instruments, so a spike in rates would act like an adjustable-rate mortgage after the teaser period ends.

If the U.S. government struggled to afford its interest payments, foreign creditors could dump the dollar and trigger an economic collapse. A reset means the banksters will have to increase the price of the gold.

They own tons of it so that they can cover their derivative positions … The global currency reset is needed to hinder the most significant and fastest increase in global debt in half a century from exploding … But for the average middle-class family or pensioner on Social Security, it will mean “huge inflation”… As the reset will imply “an exponential increase in the quantity of money” by the Fed (meaning high inflation in the prices of everything) … Excluding for maybe “some food items” that are subsidized by the government to impede people “with pensions linked to the chained CPI” from literally starving!!

When you weaponize a reserve currency for personal gain such as what Wall Street and The Fed have done, on behalf of corporate interests that provide little-to-no benefit to even your own population?

Your days are numbered.

The only thing that could ever collapse the dollar would be a sound medium of value – aka GOLD!

Third world garbage countries no doubt dislike being pushed around by the US. They also don’t like the continuous devaluation caused by printed the FAKE money that is the USD.

The only thing more unbearable for the other 140+ odd countries in the world would be to have their own budgets constrained by real money! So maybe the US is an abusive parent. But no country can EVER return to sound money. Not unless they abandon ALL social gibs budgetary black holes. And ask the French how easy that is to do. As Mr. Rickards points out, “Expectations of a Global Currency Reset emanate from the fact that monetary policies across the globe are unstable and unsustainable.”

That is an absolute fact, but one has to be impressed with how long the system has lasted so far without collapsing. One of these days, the whole thing will crumble… it literally has to… but the bankers will obviously prolong it for as long as they can because their entire empire depends on it. This is the main point Jim Rickards keeps making, and he’s not wrong.

My guess is that the longer they keep suppressing the price of gold and especially silver, the more likely it is that the currency reset will be an absolute mind-blower, a mega-shock probably happening so fast that the majority of people will never get the chance to ‘get back into gold or silver. 99% of people on the planet are going to get broadsided because they’re not even close to being the slightest bit knowledgable about the monetary system.

One day we will wake up and find out that the US dollar will be ‘re-attached’ to gold at the rate of $25,000 to the ounce. Or maybe the US Dollar will take the second seat to SDRs… it won’t really matter. Gold goes from $1200 to $25,000 in an instant and silver to $1,000 per ounce. Once that happens, 99.95% of people on this planet will have missed the boat (at least regarding physical).

Mining companies will be the biggest play of all because they will probably rise in value non-stop for a full decade. If anybody doesn’t understand why JPM has amassed the most massive hoard of pure silver in the entire history of the world, they’re not realizing that JPM is verifying what I just told you.

The Fed and their puppets (congress) have refused to allow a full independent audit of all US gold reserves, including leasing and all encumbrances… last legit audit was during the Eisenhower administration. Any of you gold-haters wonder why? HINT: the USA has no gold left, and Munuchin, like all Goldmanites, is a stone LIAR.

If/When China and/or Russia introduces a gold-backed currency… the dollar will collapse. So hang on to your dollars, you gold-hating douche-bags… it will be fun to hear your screams when economic collapse will arrive.

Deutsche Bank lost a Record of €5.7 Billion in 2019 alone, As Germany is Collapsing to Recession !
The Bank crash is getting closer. Deutsche Bank is deep in the red.

After decades of money laundering for Russian and American oligarchs, Deutsche Bank knows that their goose is cooked and that they had better start circling the wagons and getting rid of the evidence.

Shares are in freefall. Record losses, more reserves for litigation, austerity measures waiting to be implemented – no wonder Germany’s biggest bank is in crisis.

The negative headlines at Deutsche Bank seem to never stop. After the questionable appointment of Sigmar Gabriel as a member of the Supervisory Board, the figures for 2019 have now reached a new dimension.

Deutsch bank, now in its 150th year, is considered one of the global financial system’s most important banks but has been hit by a string of misconduct scandals.

Deutsche Bank lost 15 billion euros over the past five years, exceeding 9 billion euros in profit earned at the start of the decade.

Deutsche Bank plunged to a bigger than expected loss of 5.7 billion euros ($6.3 billion) last year, This is the fifth year in a row. As the cost of its latest turnaround attempt hit earnings.

The latest attempt, under CEO Christian Sewing, is a 7.4-billion euro drive to cut 18,000 jobs, shrink its investment bank and focus on corporate as well as private banking.

Deutsche Bank also reported a loss of 832 million euros between July and September, after the red of over 3 billion in the second quarter. The restructuring plans are not taking off.

Are you prepared for the imminent economic collapse? We better hope that the U.S. economy holds together in 2020, because if there is any sort of major economic collapse much of the country is going to be broke almost immediately.

Today, close to half of all Americans are living on the edge financially.  For many, it is out of necessity, but for others it is a conscious choice.

Way too many people out there see no need to build up a substantial financial cushion because they have a tremendous amount of faith in the economic system.

They don’t think that things will ever get too bad in this country, and so there is no urgency to put funds away for a rainy day.

But even if authorities could somehow prevent an economic collapse from ever happening again, individual emergencies are taking place all around us on a constant basis.  Cars break down, people get sick, and accidents happen.

Unfortunately, most Americans are completely unprepared for some sort of an emergency to strike.  In fact, a brand new survey has discovered that just 41 percent of Americans could cover a $1,000 emergency expense using their current savings… So where would everyone else get the money for an emergency?

Well, most of them would either borrow the money or get it from a relative. And usually an emergency costs a lot more than $1,000.

The bottom line is that most of the country is living paycheck to paycheck, and most Americans are just one small step away from financial collapse. Back in 2008 economic collapse, millions of Americans suddenly lost their jobs, and because so many of them were living on the edge financially a lot of them suddenly couldn’t pay their mortgages.

You would think that we would have learned something from that very painful experience, but we didn’t. So we better hope that the U.S. economy remains relatively stable, because a serious downturn would be very ugly.

Unfortunately, an increasing number of experts are warning that our luck is about to run out.  In fact, the head of the IMF recently warned that we could potentially be facing another economic collapse and “Great Depression” .

That certainly doesn’t sound good at all. Here in the United States, most people have been choosing to ignore all the signs that the economy is starting to collapse. But as stores and businesses continue to close down all over the nation, it is going to become very difficult to ignore all of the empty buildings. For example, Macy’s just announced that they will be closing nearly 30 stores. And one of the most prominent mall retailers in the entire country has just announced that they will be closing 91 stores. Of course I could go on and on all day.

Here are just a couple more examples of major retailers that are closing down stores… Bed Bath & Beyond is closing 60 locations, with the list being revealed Tuesday. And Schurman Retail Group plans to close its Papyrus and American Greetings stores, totaling about 254 locations, within the next four to six weeks. But despite all of the evidence to the contrary, the irrational optimists would still have us believe that America has entered a new era of tremendous economic prosperity.

I actually wish that was true. Sadly, decades of exceedingly bad decisions are catching up with us in a major way, and instead of changing course we continue to steamroll toward a date with destiny.

Right now I am going to share with you the number one piece of advice that I give to everyone who asks about preparing for the great economic collapse that is ahead. Build up a financial cushion. When things get bad, you are going to need money.

We have had more than a decade since the financial crisis of 2008 to prepare for the next one, but most people are acting as if the next one will never arrive. Unfortunately, the truth is that the next crisiseconomic collapse has already started, and businesses all over the nation are going bankrupt. But most Americans won’t realize what is happening until things really start getting out of hand, and by then it will be far too late to make any sort of preparations.