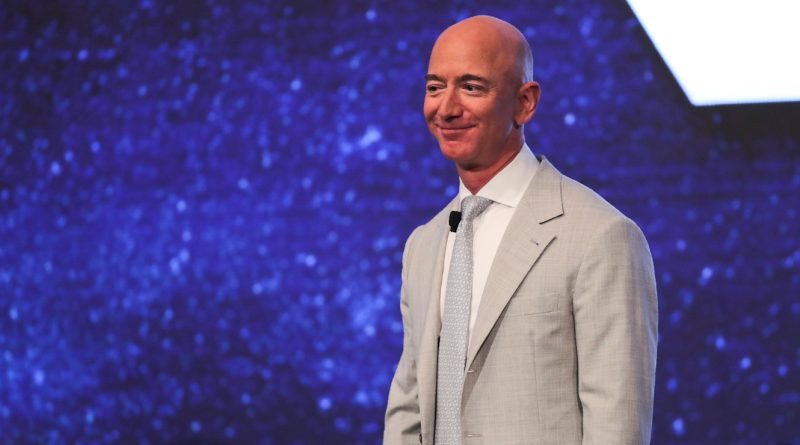 Amazon CEO Jeff Bezos, the world’s first centibillionaire, a man who vies with Bill Gates for the title of the planet’s richest individual, is asking the public for donations to provide basic support to his 800,000employees who are suffering in poverty in the wake of the COVID-19 pandemic. Bezos announced:

“We are establishing the Amazon Relief Fund with a $25 million initial contribution focused on supporting our independent delivery service partners and their drivers, Amazon Flex participants, and seasonal employees under financial distress during this challenging time.”

The fund will also support both employees and contractors around the world that face economic hardship due to natural disasters or unforeseen personal circumstances. Those who qualify can apply for a grant of up to $5,000.

“I’ve never been more proud of our teams around the world. People are supporting one another, taking care of themselves and others while also doing what we do best, which is serving customers,” said Beth Galetti, Senior Vice President of Human Resources at Amazon.

Amazon set up a relief fund for its employees and is asking us to donate.

Amazon is worth nearly $1 trillion.

Amazon paid a negative federal income tax rate in 2018. They paid nothing but got millions in government subsidies.

How is this real. https://t.co/MiLArAnTdA

A man worth over $100 billion, who makes, on average, $230,000 per minute calling on the public to help his own impoverished employees was not met well by many. Amazon itself is worth over $1 trillion, and some felt Bezos himself was in a better position than others, especially members of the public also economically hit by the COVID-19 pandemic, to help his own staff. Furthermore, the company is notorious as a bad employer. Forced to forego bathroom breaks, many company warehouse workers are effectively compelled to wear diapers during their shifts. Other employees report working in unsafe environments and being punished for injuries sustained on the job. The company also does not provide its employees with regular access to clean water.

Amazon workers are poor. Really poor. In Arizona, for example, the company’s own data suggests that one in three employees depend upon food stamps to put food on the table. It is the twenty-eighth largest employer in the state. However, it ranked fifth on the list for most employees enrolled in the Supplemental Nutritional Assistance Program (SNAP). Across the United States, it is a similar story. In Pennsylvania, for instance, Amazon is the nineteenth largest employer but is in fifth place on the SNAP employees list of corporations. And amidst the deadly COVID-19 pandemic sweeping the globe, the job is one of the more dangerous around, as workers are constantly on the move, handling a great number of packages and in close proximity to others. Despite its poor pay, the job is considered essential to the upkeep of society.

I can’t even process this…

Amazon — you know, the one run by the richest man, the one whose sales have shot up during a pandemic — is doing an online fundraiser. Asking all of us to donate to support its warehouse temps & flex drivers hit by Covid.
https://t.co/QWd851eXBk

Bezos’ charitable donations often garner him considerable praise in the media. His donation of one million Australian dollars to aid the bushfires in January generated headlines proclaiming his generosity. But as MintPress reported, that was equivalent to just three minutes’ income, as generous as a person making $20,000 per year donating a dime. Linsey McGoey, Professor of Sociology at the University of Essex, UK, toldMintPress that, “philanthropy can and is being used deliberately to divert attention away from different forms of economic exploitation that underpin global inequality today.”

In other news, Amazon employees in Chicago announced yesterday that, through collective action, they had forced the company to agree to paid time off for all U.S. warehouse workers, something that will be especially useful in the current circumstances. “Almost a year ago, in the summer of 2019, a small crew of us got fed up with Amazon’s bullshit and met up outside of work because we felt we had to do something,” they said, proclaiming victory.

In the U.S., the company is currently increasing recruitment to deal with a sharp surge in sales. On the other hand, the government of France has suspended all non-essential Amazon deliveries in a bid to cut down on contagion rates. The company has also been forced to halt price gouging on its website of key products like hand sanitizer.

While Bezos asks for donations, he appears to genuinely not have considered using his own wealth to help those in need. In 2018 he lamented that “the only way that I can see to deploy this much financial resource is by converting my Amazon winnings into space travel. That is basically it.” His employees might have other ideas about how he could use his fortune.

Alan MacLeod is a Staff Writer for MintPress News. After completing his PhD in 2017 he published two books: Bad News From Venezuela: Twenty Years of Fake News and Misreporting and Propaganda in the Information Age: Still Manufacturing Consent. He has also contributed to Fairness and Accuracy in Reporting, The Guardian, Salon, The Grayzone, Jacobin Magazine, Common Dreams the American Herald Tribune and The Canary.