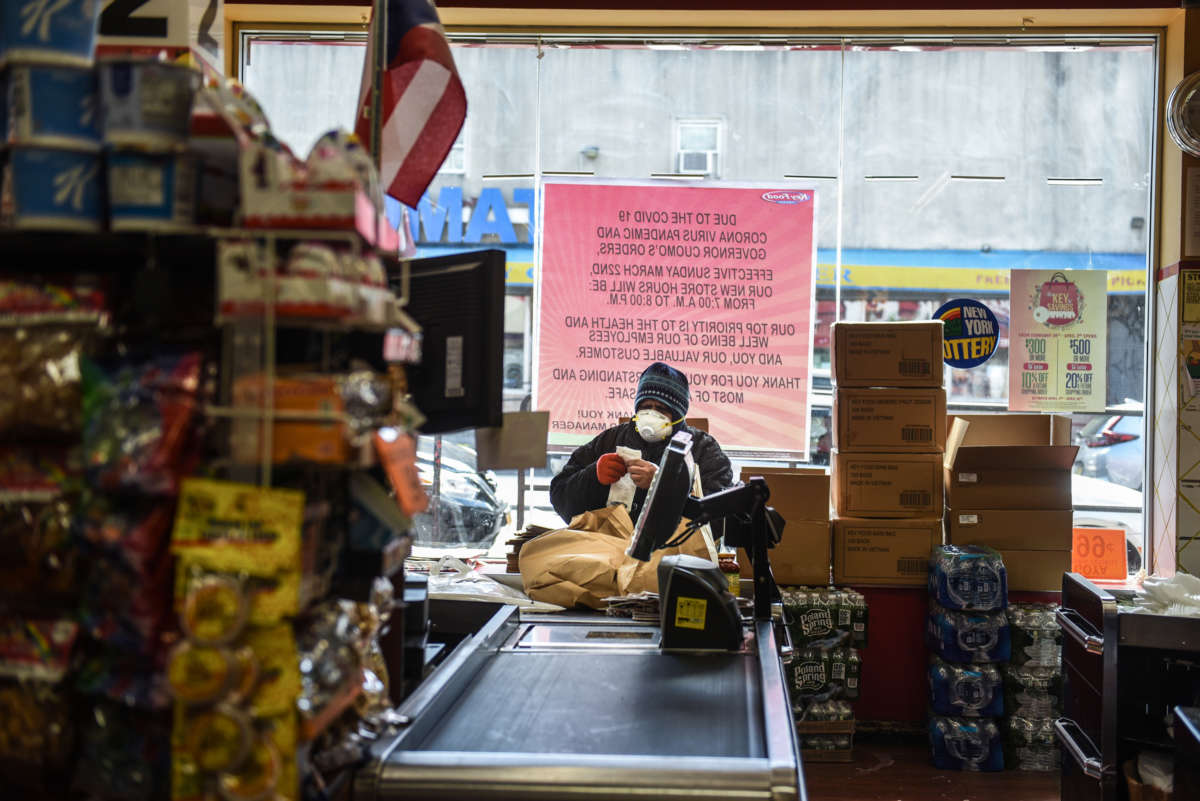 Silence fills New York City like ancient ruins. Stores are closed. Restaurants are closed. Behind shut doors, millions are panicking. Calls to suicide hotlines have spiked. My phone vibrates with constant anxious texts: “All my work shifts are canceled,” “Mom is in the hospital,” and “How can I pay rent?”

The U.S. is in free fall. The economy is collapsing and politicians of both parties, terrified of national disintegration, quickly passed a $2 trillion stimulus. Soon $1,200 payments will arrive. Unemployment will be extended. Corporations will be bailed out.

But. It. Is. Not. Enough. And when the stimulus check money runs dry, Americans will be plunged deeper into debt.

The giant stimulus exposed the cruelty of the United States allowing generations of people to be crushed by debt and poverty. The student loan debt of $1.6 trillion, the medical debt of $88 billion wrecked lives; it could have been paid off. When the coronavirus pandemic subsides, we cannot go back to business as usual. The mass solidarity growing in social distancing can develop into a call for a new socioeconomic system. That system could begin with abolishing debt in a Jubilee Year.

The Downward Debt Spiral Is Upon Us

The coronavirus is like a deadly pollen blown by coughs and sneezes, then accidentally rubbed into mouths or noses. Most of those who get it won’t know it. Maybe a mild fever. Maybe a dry cough. It is the old and those with weak immune systems who may die. The surge of sick has overwhelmed hospitals, and even if quarantine “flattens the curve,” an Imperial College Report said the U.S. will see 1.2 million deaths. In order to save lives, governments around the world shut down their economies.

“Right now, I have $100 in the bank,” said Kryshana De Herrera to the New York Post, “I hope to file [for unemployment]. I hope to get something.” The sudden stop of the economy exposed our fragility; a few missed checks and we sink into debt. Over 3 million Americans filed for unemployment in March, and in April it could be tens of millions. We may see 37 million jobs vanish, specifically low-wage work like waitressing and manual labor. An omen for the future is the long lines growing longer as people wait for free food at St. Bartholomew’s Church.

Debt is like having a giant number tied to your neck dragging you down.

Even after the $1,200 checks are cashed, they won’t last long. Many will fall further into debt. The unpaid cell phone bills, car payments and rent deepen the financial hole that whole swaths of Americans are trapped in. In chasing the “American Dream,” generations of youth took out loans that total $1.6 trillion. Seeing no way to pay it off, some kill themselves in hopelessness. Many suffer in silence. After medical treatment, 137 million Americans face severe debt. It is the top reason for bankruptcy filing. It drove 11 million into poverty in 2015. The new poor joined the 93.6 million who scrape by on low incomes; the 38.1 million poor in 2018 that include 17 million in deep poverty.

Debt is like having a giant number tied to your neck dragging you down. Pulled down by its weight, all the things that keep you anchored to the modern world can blink out one by one. The job is gone. The phone, car and apartment are gone. The person you saw in the mirror is gone. Even as you sink, you still have to pay. Debt collection agencies harass you. Sallie Mae wants money. Chase Bank wants money. Hospitals want money. Major institutions like college and health care feed off debt payment. Monopoly corporations feed off of rent. Even as you drown, they steal the last bubbles of air.

Every day that goes by, the U.S. debt crisis deepens. The COVID-19 quarantine paralyzed industries and it could last up to a year, maybe more. Workers who lose work can’t pay bills and can’t buy goods from businesses who fire their workers, who can’t pay their bills. The downward debt spiral accelerates. A working-class collapse threatens to bring down the wealthy, and that is why Republicans and Democrats race to stop their fall. They could have done this all along. They chose not to.

“At last we have a deal,” announced Sen. Mitch McConnell, “…the Senate has reached a bipartisan agreement on a historic relief package.” The $2 trillion stimulus is a giant mountain of money; $1,200 payments go to taxpayers making up to $75,000; $500 billion are set aside to bail out companies, with $75 billion set aside for loans to industries like airlines and hotels; another $100 billion goes to beleaguered hospitals; unemployment is extended, and there’s a fund for small business loans. But that’s not all.

We face a future of more pandemics and an intensifying climate crisis. A dramatic expansion of social welfare programs is not negotiable; it is a necessity for survival.

More dazzling yet, in an act of hocus pocus that would make David Copperfield proud, the U.S. Department of the Treasury gave $454 billion to the Federal Reserve, which through the alchemy of fractional reserve banking can leverage that up to $4 trillion and throw it at the economy like poker cards from a magician’s hat — conjuring vast treasure out of a “fraction” of money. And it is Republicans putting on the show.

The historical irony is painful. Since the rise of the New Right, which was first given national exposure in Sen. Barry Goldwater’s 1964 campaign and consolidated in President Reagan’s two terms, small government was a Republican dogma. Reagan famously said, “Government is not the solution to our problem; government is the problem.” The same came from Grover Norquist, the Republican head of Americans for Tax Reform, who said of the U.S. government, “I just want to shrink it down to the size where we can drown it in the bathtub.” Troubling homicidal fantasy aside, the idea was in opposition to big government liberalism. Tellingly, the parts that were too “big” were those that helped the poor, workers, minorities, and saved the environment. Republicans always found war and tax cuts affordable. The hypocrisy did not go unnoticed. After Reagan’s vice president, George Bush, was voted out in 1992 after just one term, I remember Tupac’s 1993 song, “Keep Ya Head Up,” was a big hit. My friends and I would nod our heads and rap along with the line, “They got money for wars but can’t feed the poor.”

Today, the hypocrisy is on clear display. Consider that in 2013, when President Obama fought Republicans over the debt ceiling, Nobel Laureate Paul Krugman called on him to get the U.S. Department of the Treasury to mint a $1 trillion dollar platinum coin and “deposit it at the Fed.” Even Jon Stewart of the Daily Show poked fun at it. Seven years later, in 2020, that’s pretty much what Democrats and Republicans have done. Poof – we have limitless money! Like magic!

We Need a Jubilee Year

Do the poor deserve help? More important than answering that question is realizing there are only two ways to answer it. A puritanical divide between the “good” or “deserving” poor and the “bad” or “undeserving” poor has defined attitudes to welfare. The best book on this is Martin Gilens’s Why Americans Hate Welfare. He traces how conservatives spread concocted racist narratives about purported Black “welfare queens” and succeeded in turning many Americans against the program. Author Jamara Wakefield extends that analysis to debt, citing the legacy of that undeserving poor image in the shaming of Black people and LGBTQ people who carry heavy debts.

Today, millions are plummeting into debt. So far, the new poor are largely read by the ruling class as “good” and deserving of help because COVID-19 is a global pandemic that impacts us all. However, they must remain passive recipients of charity to retain this good standing. If they demand not charity but deep systemic change, the mainstream media and politicians may no longer speak of them kindly. Yet only radical change is rational now.

It is not enough to provide work, the future demands forgiveness of past debts.

Today, in the grip of the coronavirus pandemic that could kill 1.2 million of us, mostly our elderly and sick, the only practical response is a swift expansion of the welfare state, including Medicare for All and subsidized medical school. Not just one-time $1,200 payments. Not just extended unemployment benefits. Not just loans and bailouts to businesses. We face a future of more pandemics and an intensifying climate crisis. A dramatic expansion of social welfare programs is not negotiable; it is a necessity for survival.

We urgently need a Jubilee Year, a massive debt forgiveness like the one described by anthropologist David Graeber in his Debt: The First 5,000 Years. He told Democracy Now that during social crises, it was traditional for debts to be forgiven. “In the ancient Middle East, often new kings would simply declare a clean slate and cancel all debts,” he said. “The Jubilee was a way of institutionalizing that.”

A Jubilee Year may be the only way for the government to remain stable. Already a massive infrastructure plan is being eyed by both Democrats and the Trump administration. However, it is not enough to provide work, the future demands forgiveness of past debts.

As the Bill Withers song tells us, the hands of the elderly were the hands that carried us as children. The creases in their palms are the map of our family’s history. The only debt we should owe is to them. The only way we can pay it is through solidarity with each other.