If you are one of the millions of Americans wondering why Dr. Anthony Fauci is vehemently cheerleading and praising a coronavirus vaccine for ALL Americans … Robert F. Kennedy Jr. says follow the money.

Bobby Kennedy Jr. dropped a bombshell on the Thomas Paine Podcast, detailing an apparent agreement between the National Institute of Health (NIH) and the Bill Gates-backed pharmacuetical company that has the best chance at this point of securing lucrative contracts for a national coronavirus vaccine. 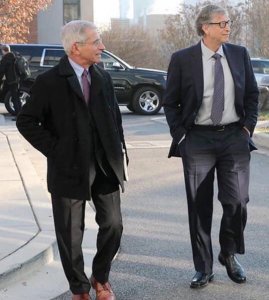 That puts your government in bed with Big Pharma and Gates and could pay as much as 50 percent of the profits to the NIH, the parent agency that employs Dr. Anthony Fauci — who again — is lobbying for the vaccine. Does Fauci get a cut of the bounty too? Or has he already been cut in?

Federal officials are not commenting on Kennedy’s alarming information. But … the NIH is the key player in deciding what vaccines get approved for coronavirus and the NIH and government would profit wildly, as Kennedy said, if the Gates-backed pharma play Moderna Inc. gets the green light. Kennedy slammed both Gates and Fauci on numerous occasions during the exclusive interview with Paine. Gates’ company is already in human trials with the vaccine. Just weeks after the outbreak? (Listen at top.)

In Washington DC Fauci’s tactics are an open secret. Intimidation. Bullying. And reckless disregard for the health and safety of the American people.

Dr. Judy Mikovits was one of the most skilled scientists of her generation. She had a 20-year collaboration with Frank Ruscetti, a pioneer in the field of human retro virology.

Mikovits: I took a job at the National Cancer Institute. I was under the direction of Frank Ruscetti. I isolated HIV from blood and saliva confirming Dr. Luc Montagnier’s earlier isolation and description of HIV as a possible causative agent of AIDS. I refused to do that because it’s unethical.

And then, Anthony Fauci intervened.

Mikovits: When Frank Ruscetti was out of town, I received a call from Dr. Fauci and he demanded that I give him our manuscript on the isolation and confirmation of HIV, while it was still in press. I refused to do that because it’s unethical. These manuscripts are confidential and only authors can give him a copy.

Dr. Mikovits’ standards of ethics and moral courage are unparalleled.

Mikovits: He threatened to fire me for insubordination but still I refused. It’s unethical.

Mikovits: When Frank Ruscetti returned a few weeks later, he gave the manuscript to Dr. Fauci, and Dr. Fauci purposely delayed the publication of our manuscript in order that his crony, Dr. Robert Gallo, could copy our work and submit a competing manuscript and get it into press before ours.

On May 4, 1984, Dr. Robert Gallo famously published a series of papers demonstrating that a retrovirus he’d isolated was the cause of AIDS.

Appropriating her work wasn’t the worst of it. This delayed the development of testing and spread the HIV epidemic through the world, killing millions.

Driven by greed and cronyism, Anthony Fauci—”America’s Doctor”—is directly responsible for the further spread of HIV throughout the world.

Rather than being punished for his actions, six months later he was appointed Director of the National Institute of Allergy and Infectious Diseases–a position he still holds today.

Mikovits: In 2006 I co-founded and developed the first neuroimmune disease institute to study the cause and treatments of chronic fatigue syndrome.

Chronic Fatigue Syndrome became epidemic in the 1980s. Doctors dismissed the ailment as psychosomatic “yuppie flu.” CFS primarily struck women. The medical community assumed they were physically and emotionally fragile and cracked under the pressure of corporate jobs.

Dr. Mikovits discovered that 67% of women affected with CFS carried a mouse virus–called XMRV– Xenotropic Murine Leukemia related Virus–that appeared in healthy women only 4% of the time.  XMRV is also associated with cancers like prostate, breast, ovarian, leukemia, and multiple myeloma. Many women with XMRV go on to have children with autism.

In 2009, Drs. Mikovits and Ruscetti published their explosive findings in the journal Science. But the question remained: how was XMRV getting into people?

Mikovits: Then in 2011, our research strongly suggested that it entered the human virome through a contaminated blood supply and vaccines.

Other researchers linked the first CFS outbreak to a polio vaccine given to doctors and nurses that resulted in the “1934 Los Angeles County Hospital Epidemic.” That vaccine was cultivated on pulverized mouse brains. Retroviruses from dead animals can survive in cell lines and permanently contaminate vaccines.

Retroviruses from those dead animals can survive in cell lines and permanently contaminate the vaccines.

XMRV is so hazardous that the mere presence of mouse tissue in a laboratory can contaminate other tissues in the same room.

Dr. Mikovits’ studies suggested XMRV is present in the MMR and polio vaccines given to American children and the Japanese encephalitis vaccine given to military personnel.

Mikovits: We recognized that this mouse retrovirus was causing an alarming national health crisis. That is if the blood supply and vaccines were heavily contaminated with mouse retroviruses of many strains.

As Dr. Mikovits and her team prepared to sound the alarm, Dr. Fauci used his power to silence her.

Mikovits: What Tony Fauci, Ian Lipkin and Harold Varmus did was pressure me to be silent and withdraw our manuscript. I refused again.

Anthony Fauci gave his own career and the vaccine program priority above the health and safety of all Americans.

Mikovits: When I refused to be silent, Dr. Fauci stepped in and ordered that my computers and notebooks be confiscated and orchestrated the retraction of our science paper.

Dr. Fauci abused his power and misused his office.

Mikovits: He then removed all of my funding and prevented me from getting a job in government research from 2012 forward.

Hundreds of millions of Americans may have received vaccines contaminated with XMRV.

Anthony Fauci has failed us.

Are you prepared to trust him?