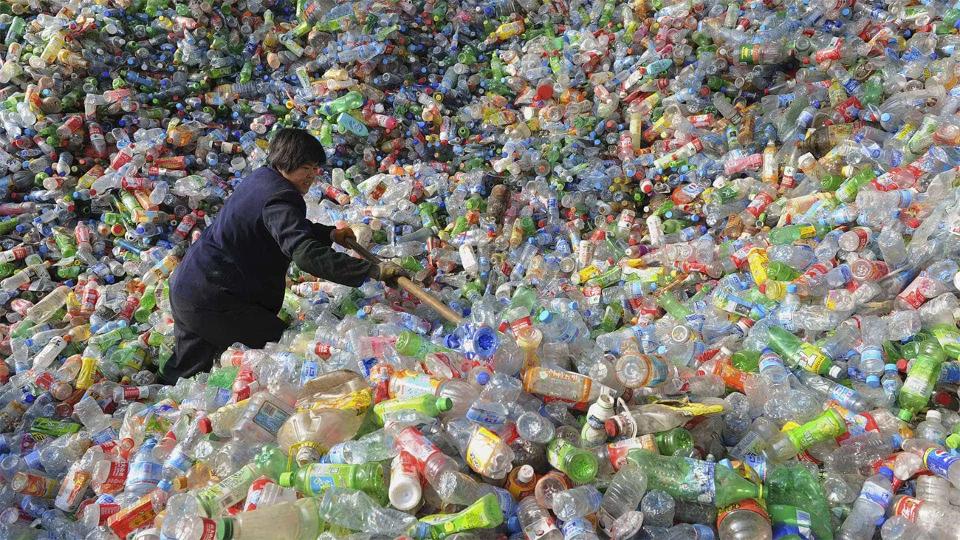 Scientists have created a mutant bacterial enzyme that not only breaks down plastic bottles in hours, but the leftover material is good enough to be recycled into high-quality new bottles.

Existing technology only produces recycled plastic that can be used for certain items, like sweaters, sleeping bags, jacket insulation and even carpets.

However, the optimized enzyme – that was first discovered in a compost heap of leaves eight years ago – was able to reduce the plastic bottles to simple chemical elements that can be efficiently reprocessed into new, food-grade plastic.

The French company behind the discovery, Carbios, says it is aiming for industrial-scale recycling within five years and it has partnered with major companies including Pepsi, Nestle and L’Oréal to further advance research and development.

Plastic water and soft drink bottles are made from a petroleum product called polyethylene terephthalate (PET), which requires giant amounts of fossil fuels to make and transport. The production of bottled water uses 17 million barrels of oil a year. That’s slightly more than it would take to fill one million cars a year with fuel.

According to the EPA, Americans recycle less than 10 percent of the plastics they’ve used. This isn’t just down to laziness, many plastics simply cannot be effectively recycled. Even the most suitable plastic is only recycled at a rate of 20-30%, with the rest typically going to incinerators or landfills, where the carbon-rich material takes up to 1,000 years to decompose. As it does, toxins leak into the environment and can cause a variety of health issues, including reproductive problems and cancer.

And while many innovators are working hard to to create new forms of plastic that can be recycled with much greater efficiency, the problem still exists with how to recycle the 60 million plastic water bottles that are thrown away each day in the US alone.

Details of the new enzyme appear in the April issue of Nature. The team, led by Professor Alain Marty from the Université de Toulouse and Science Director at Carbios, began by analyzing 100,000 micro-organisms for potential candidates, including the leaf compost bug, which was first discovered in 2012.

“After two years of the work of 20 scientists, we obtained this incredible enzyme able to deconstruct 90 percent of PET in less than 10 hours,” Marty told Forbes.

The original compost enzyme research dates back to 2012 and had been all but forgotten. The scientists analyzed the bacteria and introduced mutations to improve its ability to break down the PET plastic.

“We tested all the enzymes described from scientific literature and screened thousands of microorganisms from PET polluted environments. Enzyme LCC, described in a publication in 2012, appeared to be a good starting point to optimize the performance in terms of thermostability and activity.”

But where previous attempts to repurpose PETs that had had chemicals added to give specific characteristics such as rigidity or flexibility and color had been less than successful, this procedure was successful.

“This new process can depolymerize any kind of PET – transparent, colored, opaque, amorphous as well as crystalline, fibers – into any kind of PET product. We did not see any inhibition of the enzyme by colorants, pigments, isophthalic acid, carbon black, titanium dioxide, other polymers,” Marty said.

The Saint-Beauzire based team also managed to make the process stable at 72°C (161.6°F), close to the perfect temperature for fast degradation. They used the modified enzyme to break down a tonne of waste plastic bottles, which were 90% degraded within 10 hours.

However, waste bottles must be ground up and heated before the new enzyme is mixed in; these additions to the process will make the recycled PET more expensive than so-called virgin plastic, but Marty said that due to a shortage of supply, existing, lower-quality recycled plastic sells at a premium.

“We are currently piloting the process and we are the first company to bring this technology to the market,” he said.

“We will start building a demonstration plant in a few weeks. This plant will start-up in Q2 2021 to generate process data to be able to license our process end of 2020, beginning of 2023. Our first licensee, very likely a plastic producer, will start-up their own plant operating our technology end of 2024, beginning. of 2025.”