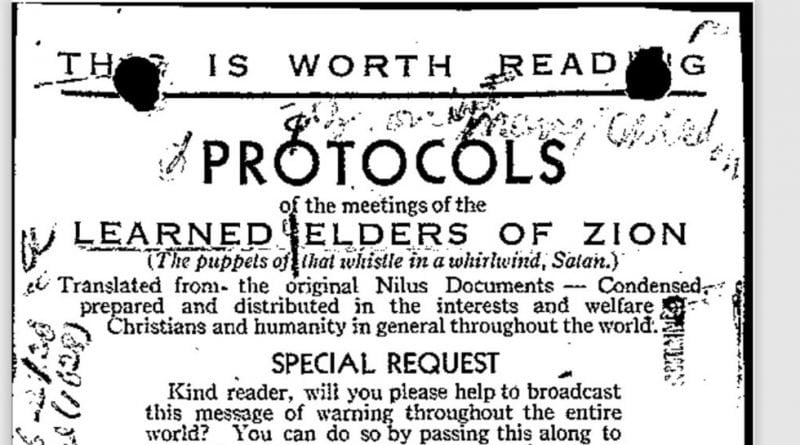 Many critics of jewish power do not actually believe that the Protocols are minutes from a meeting of jewish leaders, but something of an expose of their plans. Regardless of who wrote the document, almost everything that was written has come to pass, and the jewish conspiracy is undeniable. The jewish supremacists do not want “goyim” to read the Protocols because most people with any cognitive faculties would quickly realize that there is indeed a serious jewish problem that needs to be addressed, otherwise the rest of us will end up as their slaves in perpetuity.

The Times of Israel was quick to report on the FBI’s tweet:

The agency did not provide context for files from its archives on the anti-Semitic text, leading to accusations it could encourage bigotry against Jews

jewish organizations and individuals were also quick to condemn this blatant anti-semitism (and White nationalism)!

The @FBI is tweeting out the most famous, fabricated antisemitic text with absolutely zero context.

This is the same anti-Jewish lie that inspired Hitler and the Nazi regime.

An agency of the United States federal government just posted a copy of one of the most infamous pieces of antisemitic literature of all time, responsible for the persecution and murder of thousands, even millions. On behalf of all Americsn Jews, what the fuck are you doing @FBI? https://t.co/o3cAfiPdyL

Absolutely insane. FBI share the Protocols without any advisory. It looks like they are promoting it. Normally they get a few retweets. This has gone viral. Totally irresponsible. https://t.co/Da1HAXY2tk

The FBI often receives information from members of the public, which is captured in our permanent files and released under FOIA law. The FBI must process historical files that were collected in the past, some of which may be considered offensive

Some people are wondering whether or not this release was really just the result of an automated process or if something else is at play here.

Just a few weeks ago the FBI released their files on famous revisionist Ernst Zundel.

So what is actually going on. One jewish supremacist has a theory.

Of course Q did not hack the FBI Twitter account, but I would not be surprised if the FBI is part of the Q PsyOp. The release of the Protocols happened on the same day Trump essentially embraced the QAnon movement.

Trump is asked to shed light on his thoughts about about the lunatic QAnon conspiracy theory. Instead of denouncing it, he says, "I understand they like me very much, which I appreciate."

"I've heard these are people who love our country," he adds, coming close to an endorsement pic.twitter.com/gcvHvuqzIa

We are living in interesting times to say the least. I do not know what is going on behind the scenes and why the Protocols were tweeted out by the FBI, but hopefully this gets more people to read up on the jewish conspiracy to enslave the world.

Kyle is the publisher of the Renegade Tribune and the founder of Renegade Broadcasting,