This is a pretty neat concept worth checking out:

Unjudge someone at the Human Library

It started on June 29th in 2000. On a small patch of grass at a local music festival, participants were invited to borrow a person as an open book. More than 50 different people were published, among other a muslem, a journalist, fans of rival football clubs Brøndby and FC Copenhagen, a policeman, a parking officer and Bente, a woman from Freetown Christiania in Copenhagen.

The idea was – and still is – to challenge prejudice, stereotypes and to educate about minorities and people, who differ from what is considered “the norm”. People can borrow a human book from the library and “read” the book. The human book, in return, will tell its story, present its points of view, answer any questions, and share any thoughts.

Bente from Christiania has met many different people through the Human Library over the years. She remembers a class of school children, shortly after the library had its first events:

“Some of the children saw people from Christiania as thieves and addicts, and I realized: ‘Wow, what a difference we could make as books’,” she says.

Occasionally, Bente is still a book at the Human Library, but the stereotyping of people from Christiania has lessened. She says:

“It is still as important now as ever to challenge prejudice, to demystify and to simple talk to each other to understand others, but maybe now it is more important for other groups to be on the bookshelf.”

Since 2000, the Human Library has expanded from presenting small selections of books at local Danish events to publishing a wide range of books all over the world.

Ronni Abergel, the founder and leader of the Human Library, has been part of the journey since day one and seen how the library has grown from a pop up event in schools and colleges. To a global movement embedded in communities and institutions from Bangladesh to Brazil.

“The idea is fairly simple. We arrange for people to meet and talk in a safe and secure environment. That has proven to be a useful and effective method for allowing people to get to know about each other through conversation,” he says.

Educational institutions, companies, NGO’s, and libraries throughout the world, embrace diversity by inviting the library into their programming and large brands are working with the HLO to help develop their employees and their inclusion and diversity work.

“We are fortunate to have some dedicated friends of the library and a wide range of diversity partners that help enable us to build more permanent infrastructure for the library, while we help them create more inclusive workplaces.”

Making a difference for everyone involved 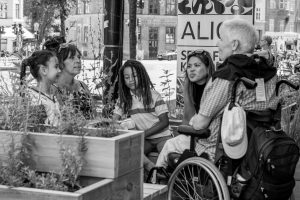 A disabled book with a group of readers in the garden. (c) Elin Tabitha 2020.

And the range of titles has also expanded considerably. The Human Library now includes a variety of topics based on 12 pillars of prejudice, including ethnicity, mental health, disabilities, social status, occupation and religion, so the readers have a real choice when they select their human book.

“All people judge and so we are not here to change your mind or to tell you not to judge. We are here to make information available to you in a safe setting. So you can make your own decisions, but hopefully better informed decisions. Based not on a quick judgement, but after more careful consideration and after meeting someone that knows about it. Gives you a chance to unjudge someone”, explains Ronni Abergel.

Dan has ADHD and AS, which is a type of autism. He has been a book in the library for five years and says:

“The more people, who understand what autism is, and get to understand how to show consideration and be inclusive, the better for me and others like me.”

“People come here to learn from my story, and that is much less likely in a room full of NT-people,” he says.

NT means neurotypical and is the abbreviation used for “people with a normal brain”, and Dan enjoys being with people who are not just NT-people but share the experience of having a different background in some way.

Human Libraries in different parts of the world not only challenges prejudice and stereotypes, it also creates a safe space and extended “family” some say, for the books, who help and support each other, when facing a world that sometimes feels less safe and welcoming.

Inside the Human Library you will find one of the most diverse groups in your community. All bound together by a motivation to help build a greater understanding for people with their background, but as they become “books” and take their place on the bookshelf, many realise that they are in the same boat as many other people from different groups.

Now the Human Library has opened its first permanent book depot in Copenhagen. The building and the surrounding reading garden– a place designed especially for the books, librarians, and readers to meet and an opportunity for schools and other groups to visit the library.

The Reading Garden in Copenhagen is open for visitors on select weekdays and weekends. It serves as a permanent space to have a conversation about diversity. The garden was opened with a ceremony on June 26th by the Mayor of Culture Franciska Rosenkilde and with lots of hardcover books, E-books, and international editions published.

The Covid-19 pandemic and ensuing lockdown has forced the library to find new ways to meet readers and continue the conversation: The Facebook Live readings and the virtual Readers Corner events. Are both examples of how readers now can join in larger groups or connect with a book, who cannot be present in person, online instead.

For example, a transgender from the Human Library in London is published live at the “World Library”. A virtual event that ran concurrent with the opening event of the new library in Copenhagen. A family is asking questions and they are moved by the honesty and openness of their book: How the parents reacted when they learned of the desire to change pronouns from she to he, and to change name from a female name to a male name and later changing his sexual orientations.

“The Human Library is an amazing charity, and I have met so many people and made so many friends,” he says.

Unjudgement Day celebrations included the inauguration of the Human Librarys Reading Garden, a virtual world library featuring books from book depots around the globe and a childrens library.