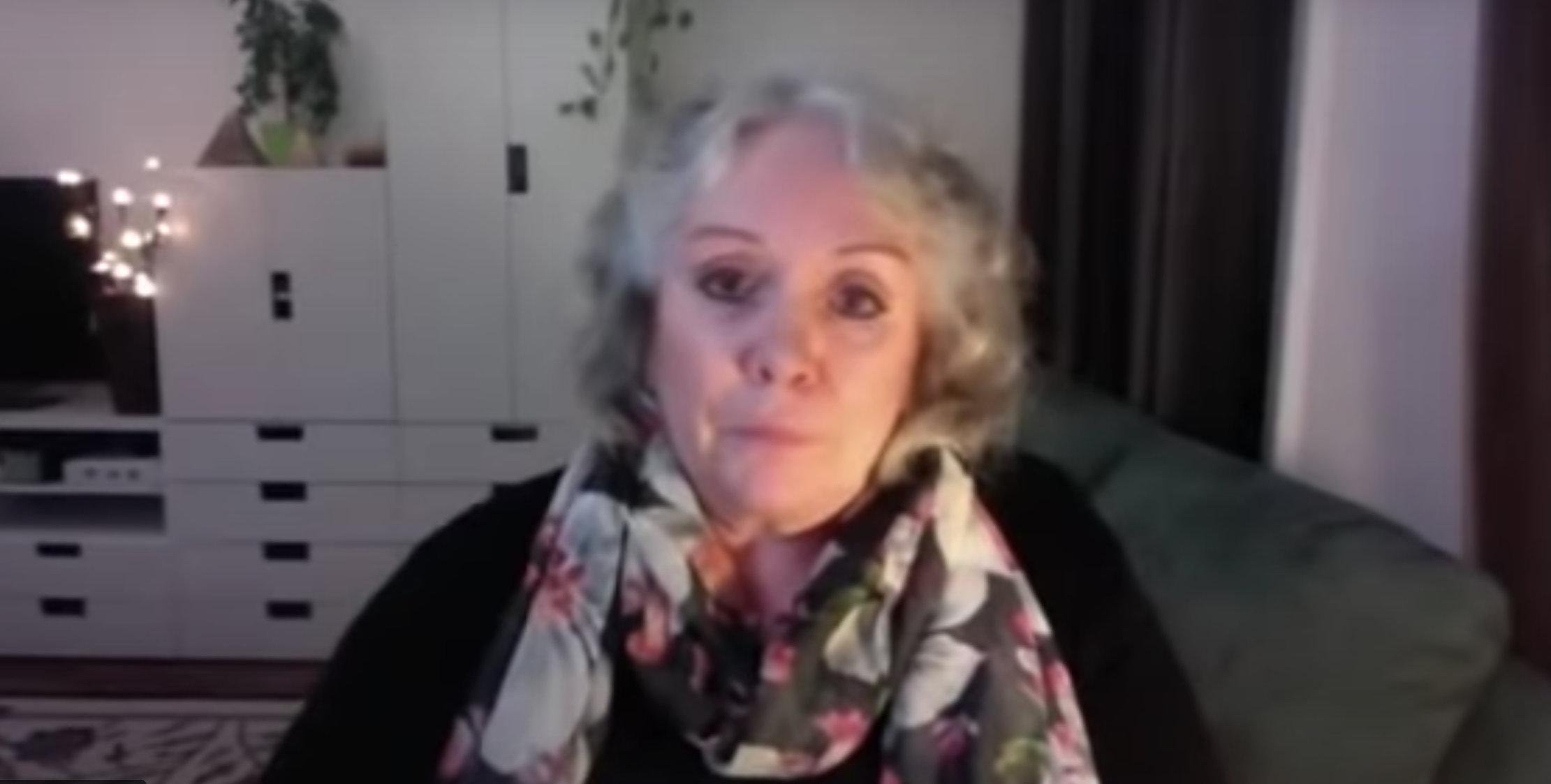 UPDATE!!   KNOCKED OFF THE AIR DURING BROADCAST BY YOUTUBE!!   THE SHOW IS 2 HRS 17 MINS AND HAD A LARGE LIVE AUDIENCE ON MY MAIN CHANNEL.

AND THEY GAVE MY CHANNEL A STRIKE… THE PREVIOUS STRIKE EXPIRED JUST YESTERDAY!!  WILL UPLOAD TO BITCHUTE AND MY ALT YOUTUBE CHANNEL THEN HIDE IT…WILL EMBED HERE ASAP.  GREAT SHOW… We talked about everything from 5G to Covid to the NWO plots and ops….!  Must have hit a nerve LOL….

If this gets censored on Youtube please go to Project Camelots’ page:

Claire Edwards bio (in her own words):

…”You asked me to write some sort of bio and this seems to be particularly challenging when it comes down to it.  There are very many threads to this story and it is humongous, going back at least to Darwin.

I have a degree in French Language and Literature and a master’s degree in Intercultural Competence. I am a former United Nations editor and gave trainings at the UN in intercultural writing. While at the UN, for many years I edited all the documents of the UN Committee on the Peaceful Uses of Outer Space and its Legal and Scientific and Technical subcommittees (such that I am familiar with space law and the particular issues of concern regarding use of the space orbits).

I am bicultural (English/Irish) and have lived in six different countries (England, France, Czech Republic, Japan, Thailand and Austria) and speak English, French, Japanese and German, in that order of competence.

I worked at the UN for 18 years as an editor, correcting and fact-checking official documents and publications, which included the topics of terrorism, drugs and space.  I was alarmed when they put up public access points with very high levels of electromagnetic radiation in the Vienna International Centre in December 2015.  No one listened to my warnings so I ended up confronting the UN Secretary-General about it on 14 May 2018, after I had retired (www.takebackyourpower.net/un-staff-member-5g-is-war-on-humanity/ – 6 minutes).

That led to my contribution to the International Appeal to Stop 5G on Earth and in Space, co-authoring and editing it and administering its translation into 30 languages.  It was the first appeal about EMR that gained traction with the public.  So I became something of a lay expert on 5G and the dangers and history of electricity, which led to my understanding that 5G is a weapon, and that in fact wireless technology as a whole has been a weapon right from the beginning.  The person who first set the so-called safety guidelines was a Nazi scientist (Operation Paperclip) who previously worked at the Kaiser Wilhelm Institute of Anthropology, Human Heredity, and Eugenics!

The Appeal was hijacked, effectively by the Club of Rome, last December precisely because it had been so successful.  That then led to my finding out about depopulation and eugenics – which of course dates right back to Darwin and the Fabian Society – and Agenda 21/2030 and “sustainable development”, which in my view really means “sustainable rapaciousness” for the predatory oligarchs.  Club of Rome is also responsible for the climate change hoax, of course, and this is used as the pretext for the “Green New Deal”, which is actually about the monetization of nature or the theft of the planet, which is the ultimate goal.

The Appeal was hijacked by a subsidiary organization of Club of Rome, called Worldshift, and it is Worldshift that explains exactly what “The Great Reset” is all about, which is a Maoist Cultural Revolution, which entails the destruction of everything: the family, communities, societies, nation-states, religion, and humanity itself.  This is what we have seen enacted this year and it is why the Democrats in the US are now seeking civil war.

And then came the “Covid” scam, which I immediately recognized as the cover for the use of the electromagnetic weapon.  So I looked at what happened in Wuhan and Milan, and then I watched the murder of the old and the sick during the first half of this year.  So they are now fully embarked on their genocide and I drafted and delivered this “genocide” document on 2 November, which someone turned into a short video: www.bitchute.com/video/D0RN8vHfEaTi/.

The coming “Covid” vaccines are about depopulation and the genetic modification of humanity – in effect the deletion of humanity and the imprisonment of the remainder of humanity – the cyborgised ones – in “smart” cities.  All the research on microwave radiation was kept secret by the US military so that weapons could secretly be developed and no one would realise.  They thought that if they called this new generation 5G, everyone would just think it was another generation of wireless technology and nothing much to worry about.  But in fact, as I am sure you are well aware, all of these technologies are extremely sinister and include mind and emotional control, including by HAARP.  In fact, I suspect that the 5G satellites are HAARP gone digital.The cell phones themselves are extremely sinister.  Not only are they incredibly dangerous in terms of what they do to the human body, and we have the evidence for the health outcomes now, but I think they are used in many other ways, including mind control.  They are addictive for one thing.  They can also be used to transmit simulated pathogens to the user. Thus you can imitate contagion, and that is how the hoax is played.  Just think “contact tracing”.

No one realizes that electromagnetic radiation is so dangerous as it has been kept hidden through regulatory capture and military secrecy.  Doctors receive no training on the symptoms of exposure to electromagnetic radiation.  And of course everyone lives in a Western materialist-reductionist paradigm and thinks that the world around us is solid, so when you try to explain that the body is not solid and consists entirely of frequencies – each organ has its own frequency and each emotion has a frequency, for example – no one believes you.  I basically think that the 20th century is the lost century because quantum physics should have changed our perception of everything, but instead we descended into a complete fiction of everything: money, economics, medicine, education.

Vaccines have for some time contained nanoparticles and these plus electromagnetic radiation together make a binary weapon. Each particle is a micro antenna that picks up the radiation and this then explodes cells within the body. The first use of this weapon resulted in Gulf War syndrome (Tom Bearden). This could account for the old people, who had received flu vaccines in Wuhan and Milan, having died in such large numbers.  This binary weapon is already in use for cancer treatments, so what does that suggest about the upcoming “Covid” “vaccines”?

What doctors in general fail to realize is that the symptoms of “Covid” are in fact the symptoms of exposure to electromagnetic radiation. I made a table comparing these symptoms in an article entitled “Our Children Are Now in Grave Danger”: stateofthenation.co/?p=31293.

Next they plan to cut off the food supply and introduce a digital currency.  All of that implies the end of the dollar as the world’s reserve currency and therefore the destruction of America, which is what we are looking at now with this election because the conspirators behind this want civil war in the US. One thread of all this is the banking thread.  You can go way back to the Federal Reserve and the bankruptcy of America, but I prefer to go back to the Bretton Woods agreement and the delinking of the dollar from gold in 1971, which led us into the fictional economics of game theory, which was adopted in the 1970s.  We are now fully in a game of poker, and the conspirators are bluffing us with their “laws” and illusory control of everything, hoping to be the winners that take all.

I’ve now got to that depth in the rabbit hole where I am realising that all this microwave radiation is bringing in entities – the Archons / Jinn / demons – whatever you want to call them and it is they that have taken over most of the politicians.  I spent six years before getting involved in stopping 5G looking into the nature of reality and studying mediumship and all of that now comes into play. “–Claire Edwards