After reading M’s letter, it appears that M, myself, and certainly many other of your subscribers are desperately seeking some specific clarity as to the next 6 days and the plan for  USA Inc.  While you responded about the breakup of the US.   I would have to guess that would be something that would take place after the next 6 days    ( yes? / No? )

You and many other sources are saying over and over that  ALL the evidence is in Trump’s hands and the nature of said evidence is solid and overwhelming.   So what’s the hold-up?  We are in our last 6 days? And I would think that if the evidence isn’t disseminated in some manner,  in masse in the next 2-3 days,  then “THE PEOPLE” will not have time to digest & firmly grasp where the new reality is heading.  It’s obvious that major media is censoring Trump at every turn to try and keep things under wraps.  So what’s next?

What are your sources telling you?  What are some specific things, occurrences, etc. that your subscribers could watch for so that we may get a better handle on what’s really about to go down?

Approaching good news – I read an article about the space program and a new energy source to help get the rockets, etc. to where they want to be and at the end of the article there was mention of this same new energy source being able to provide virtually free energy to the world!  Something you have brought up before.

To be honest, I do not think anyone knows what is coming next with 100% certainty because it is literally DO or DIE for the Deep State Bad Actors in the closing stages of the revolutionary play.  That said we may see a lot of  “suicides” with no investigations in the coming weeks and months.

I say this because I am in daily touch with the CIA, FSB, Defense Intelligence Agency, MI6, P3 Freemason sources, etc. and they do not know what is going to happen with 100% certainty.  It may well be the Final Act for the Deep State Bad Actors who are ruthless and evil beyond imagination.

As a White Hat, we are instructed NOT to reveal sensitive information into the public spotlight too soon.  We are chosen as a negotiator and public face because we are not afraid to die for the just cause of bringing the truth to the world in whatever manner possible.

Please understand, secrecy is necessary to provide operational security in these final stages when any leak could alert the Deep State international swamp criminals to the venom that awaits them, with the massive sting operation that has been years in the planning.  The WDS has an ongoing operational exchange with Pentagon White Hat sources in order to provide security as well in Asia.

There are some indications the Deep State realizes that Trump is not just looking for reelection, he’s completing the work of JFK who got knifed in the back by Bush Sr. and the European Banksters, when he tried to end the CIA and Fiat-Debt-Based “Currency” Insta-Magic-Credit System. Let’s call it the FDBC- IMCS for short.

Perhaps Trump is just a frustrated patriotic businessman who was recruited to become President and complete the White Hat triangle of Constitutional power necessary to defeat the dark enemy of mankind and bring in a new age of awakening and freedom from financial slavery.

Catching the corrupt MSM and social media swamp creatures going way over the line into electioneering, with whatever fabrication necessary to demonize Trump and the Patriots, may prove to be a key element of the sting operation.  And now the net is tightening as the share prices of Twitter and Facebook plummet.  Print media and broadcast networks are also in line for a complete housecleaning.

The Deep State is making its last stand now that its members realize they’ve lost at the political game of chess.  The report on election interference by a foreign government is still due to be released.

Trump is cleverly taking back control of the Constitutional Republic and destroying the central banking system like Andrew Jackson.  He’s freeing the country from financial slavery, which, through the power of pubic awareness of a global audience, may eventually cause all the other BIS central banks to fall like dominoes around the world.

All half-a-dozen countries, including Canada, involved in the election fraud are being identified with power-outage special operations and curfews.

When all is said and done, as a Canadian who has traveled and lived throughout North and South America, I envision a unified region of cooperation through the exchange of goods and services for mutual benefit.

But still, the revolutionary play has time left to feature Pelosi’s closet being opened with the investigation announced Jan. 6th into her father, initiated by JFK.  It’s starting to look like Trump will follow what JFK tried to do and finish the job.

One scenario could have the internationally-coordinated Biden election fraud revealed before Jan. 20th, which under the EO of 2018 would make the election null and void and bring in an interim military government.  This patriotic military government, operating under the laws and rules of the Constitution, would finally have a chance to look at all the “MSM nonexistent” election fraud.  During an interim period, military tribunals will expose the right and left Deep State swamp criminals and a new political party emerges – Great America.

On March 1st, the investigation into the 2020 election fraud is concluded and the actual results are certified.  On March 4th, Trump is inaugurated as the first president of the United States of America Republic.  It’s really a shame, but due to the China Virus the U.S. Corporation and the Federal Reserve Bank both declare bankruptcy.

Another scenario might feature a 70% purge of the Deep State Actors in the Senate and House, facilitating November 3rd, 2021, Senate and House elections using paper ballots.  The shocking revelations of the Cabal’s U.S. political and global crime syndicate spawn a worldwide phenomenon of awakening.  This is the result of weeks of military tribunal evidence shown worldwide over the Emergency Alert System and all nationalized media found guilty of electioneering on behalf of a foreign power in a federal election, in violation of the 2018 EO.

It’s now public that Pelosi’s laptop data got retrieved during the staged event on Jan. 6th.  And I suspect it’s no coincidence that Trump delayed his speech by one hour to make sure it would be distinguishable that his supporters were still listening at the rally, at the same time Antifa stormed the Capital.  The sting has collected evidence of bused-in, with DC police escort, antagonists dressed up in Trump supporter gear with Confederate flags.  Credits perhaps to Soros Jr. who has a budget for good Insurrection-OP scriptwriters.

It now appears the Trump Sting operation is in the closing stages.  If successful, it may hold the promise of a historic transformation into the next evolution of the planet, with a financial system that doesn’t burden workers with unnecessary interest on a nation’s money supply, created as virtual-world, credit debt “money of account,” to be repaid with real-world goods and services “money of exchange”  and additional compound interest.  For anyone not familiar with the power of compound interest as a financial weapon, please Google it at your own risk.

Having said all that, based on everything I am hearing we are dealing with a group that is above the level of visible governments and headquartered in Switzerland.  They planned this ongoing COVID-19 campaign at least as far back as 2012 in order to reduce the world’s population by 90% and enslave the rest.

The problem is that they have control over most of the visible leaders on Earth through a combination of bribery, brainwash, and blackmail. This means we need to remove the heads of state for most of the G7 countries in order to deal with this. My understanding is that this process is underway but the problem is so many people have been conditioned into following orders that we need to let the current system collapse further before it will be possible to reboot it.

Joe Biden was rarely seen in public during the entire so-called election campaign, and it’s uncertain if he even exists mentally or physically anymore.  Has anyone seen him recently taking a group photo with the Joint Chiefs?  Realistically, there is no way they could ever accept him knowing he is a traitor to his country multiple times over, even before the 2020 election fraud.  It’s truly amazing the depths that the Deep State will sink to, to make sure Biden gets presidential immunity from prosecution and the big hairy plug remains in the bottom of the swamp.

My understanding is that the Rockefellers, Rothschilds, and associates, made a deal with China “to elect Biden,” and then remove him after a short interval and put Kamala Harris in power.  They must have felt they had to do this or watch their USA Corporation go bankrupt.

In any case, the battle is raging.  There is a lot of stuff I cannot talk about but we have specific actionable intelligence that could end the COVID campaign.

To summarize there will be chaos and systems collapse over the coming months in the West, and only then will something better emerge.

p.s. Since “Nothing Can Stop the Storm” I would point out that this Memorandum signed by the Joint Chiefs doesn’t appear to be dated, making it technically incomplete at some intermediate stage of certification, and may become known as “The Trump Card” for posterity when the storm hits.  Make your enemy think you are at your weakest when you are at your strongest in the Art of War. 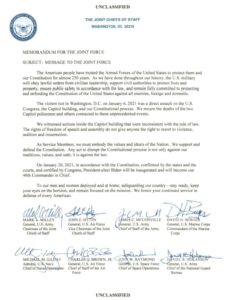