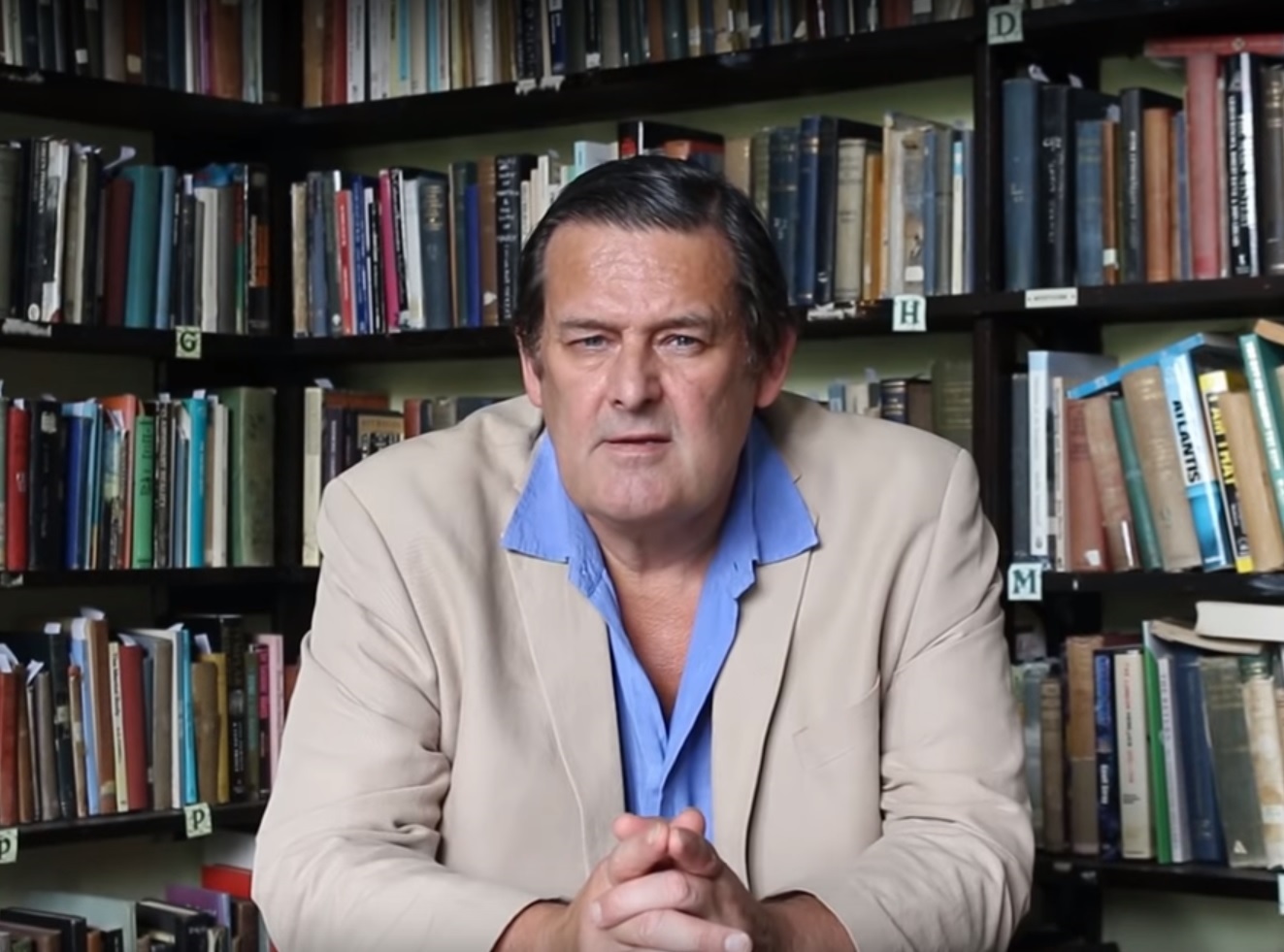 Whether you’re an astrophysicist, a dowser, an astrologer or an intuitive New Ager, there is one thing you will probably all agree on: that the energies, they are a-changin’.

Something called the galactic current sheet is literally making waves in our solar system – and they are only likely to get bigger.

Where the abovementioned groups may disagree is on the likely consequences of this cosmic phenomenon.

‘Forget climate change, forget any virus. These changing space conditions are in the driving seat,’ he says.

UK-based Rory is one of the world’s most experienced dowsers, having learned the skill back in 1981 while working as a geologist for a gold-mining company in Africa.

As well as arranging and analysing drilling programmes, he and colleagues also helped farmers locate water sources by dowsing to find precise drilling locations for wells.

But for the last 30 years he has focused on a different kind of dowsing.

Rory and his international team of volunteer dowsers have been identifying, categorising and mapping energy lines, which occur everywhere and come in various bandwidths and frequencies.

They were clearly known to our ancestors, as the points where they meet are often marked by sacred sites such as England’s St Michael’s Mount, Glastonbury Tor and Avebury.

These intersections are called nodes and the quarterly solstices are times when particularly harmonious energies are detected by dowsers and intuitives.

The widest, lowest frequency and most powerful energy lines found on Earth are known as type 5 lines – the Emperor Dragons.

Six Emperor Dragons were found as three pairs in 2012. They crossed each other in only six places – two in oceans, the other four on land.

‘In 2017 all the earth’s energy lines suddenly doubled in width as a result of a huge increase in cosmic energy,’ says Rory in his free monthly newsletter at roryduff.com. ‘Shortly after that we had the arrival of three more pairs of Emperor Dragon type 5 lines.’

Rory believes the source energy of these lines is probably ‘galactic’ and that the centre of our Milky Way galaxy is ‘almost certainly one of these sources’.

‘We are looking at the very real possibility that these energy lines are connected to the events, magnetic fields, plasma and cosmic waves now being encountered as our solar system enters this galactic current sheet,’ he adds.

‘The cosmic energy is thought to hit our atmosphere, convert to neutrinos and pass down through Earth’s solid inner core, where it is converted to ultra-low vibrations that then emanate back to the surface, where it shows up in lines of high pressure that dowsers pick up and call energy lines.’

The galactic current sheet is an electric field that ‘ripples out’ from the centre of the Milky Way.

It’s similar to the Sun’s heliospheric current, which the Earth passes through for two minutes every eight to ten days.

And it takes Earth hundreds of years to pass through it.

The galactic current sheet comes with a lot of cosmic dust travelling with it, unlike space in our own solar system, which is much cleaner.

Rory believes this dust will cause the ‘red sun’ and ‘black sun’ phenomena spoken about in ancient legends and prophecies and seen by many today in visions.

He does not expect the red and black suns to be a problem in themselves but a warning of other changes and challenges to follow.

Another recent discovery by dowsers is that smaller, type 3 energy lines, which have a bandwidth of 16 hours in winter, 12 hours in summer and 14 hours at the equinox, come into harmony whenever Earth passes through the Sun’s current sheet.

According to Rory, this implies that when we pass into the galactic current sheet, all the energy lines will come into harmony – possibly for a lot longer than 200 years, which is the time our solar system takes to pass through this sheet.

‘The implication of living with one energetic vibrational frequency for 1,000 years is incredible,’ he says.

In the central area of the galactic current sheet is what is called the ‘reversal zone’.

This is defined as an interface between two different magnetic regions – opposite yet parallel electric flows which, along with the spin of the galaxy, lead to a ripple-like effect that has already been observed.

As we move through this sheet roughly every 12,000 years, it is a cyclical event frequent enough to be retained within human memory.

‘As our solar system heads towards this reversal zone, we will get more pressure waves and the Earth’s magnetic field will continue to lower in strength,’ says Rory.

‘The question on the mind of everyone who knows about this – and that’s still only a very small percentage of the world’s population – is what will happen to us.

‘To me this is the biggest single question facing mankind right now yet it’s not even being discussed in the mainstream media.’

The Hopi prophecies offer more information on this. In the later decades of the 20th century, Hopi elder Thomas Banyacya warned repeatedly of natural disasters, extreme weather and ‘more sickness that can’t be cured for a long time’ during an era when ‘the seasons are going to change’.

You don’t need to be a seer to detect that some of this may already be unfolding.

He sees that as the start of a seven-year countdown before we fully enter the actual galactic sheet, which he expects to happen around the December solstice in 2024.

Rory believes the dowsers’ findings are backed up by discoveries made by the Voyager 1 space probe.

‘It now appears that in 2017 Voyager 1 found a magnetic pressure wave,’ he says.

‘This has not stopped building since then and in May 2020 another wave was detected.

‘Scientists now think we will get many more of these as we head deeper into the reversal zone in the galactic current sheet.’

Rory is wary of those who try to link imminent events with things that may have happened around 12,000 years ago, such as the legendary sinking of Atlantis.

‘There are cycles within cycles, and each one of those cycles will produce greater or lesser effects on life and the way the planet operates,’ he says.

‘We are very likely to be hit by a solar flare that will take out all our electromagnetic systems on the side of the Earth that is facing the Sun at the time.

‘How much of an area will be disabled and for how long will largely depend on the size of the Sun’s outburst.

‘I also see huge shifts in weather patterns with some regions becoming much, much hotter and others much colder.

‘It’s possible we will see a buckling of the Earth’s thinner oceanic plates and some islands may sink and disappear while new land masses could appear.

‘The Atlantic and Pacific plates can move up and down, which may be what happened with Atlantis, but I don’t necessarily see that happening now.’

Rory believes the event will be a ‘massive wake-up call’ with the cosmic energy affecting our minds and our cells in an evolutionary way.

‘Psychics will pick up on these energies. Empathy, telepathy and clairvoyance will all be heightened especially among the gifted,’ he says.

‘For those not understanding what is happening to their minds, on the other hand, there will unfortunately be increasing mental health problems.

‘The number of people who do notice these changes and awaken will be in the millions and will be a growing force to be reckoned with.’

What Rory is talking about is the galactic aspect of an evolutionary spiritual leap for humanity and Mother Earth – a long-awaited time variously known as ‘Ascension’, the ‘New Age’ and the ‘Age of Aquarius’.

But although he foresees momentous changes ahead, he is not pessimistic.

Referring to previous disasters whose details are immersed in myth and prehistory, Rory adds: ‘Mankind will survive in huge numbers this time because we are going to be far better prepared.’