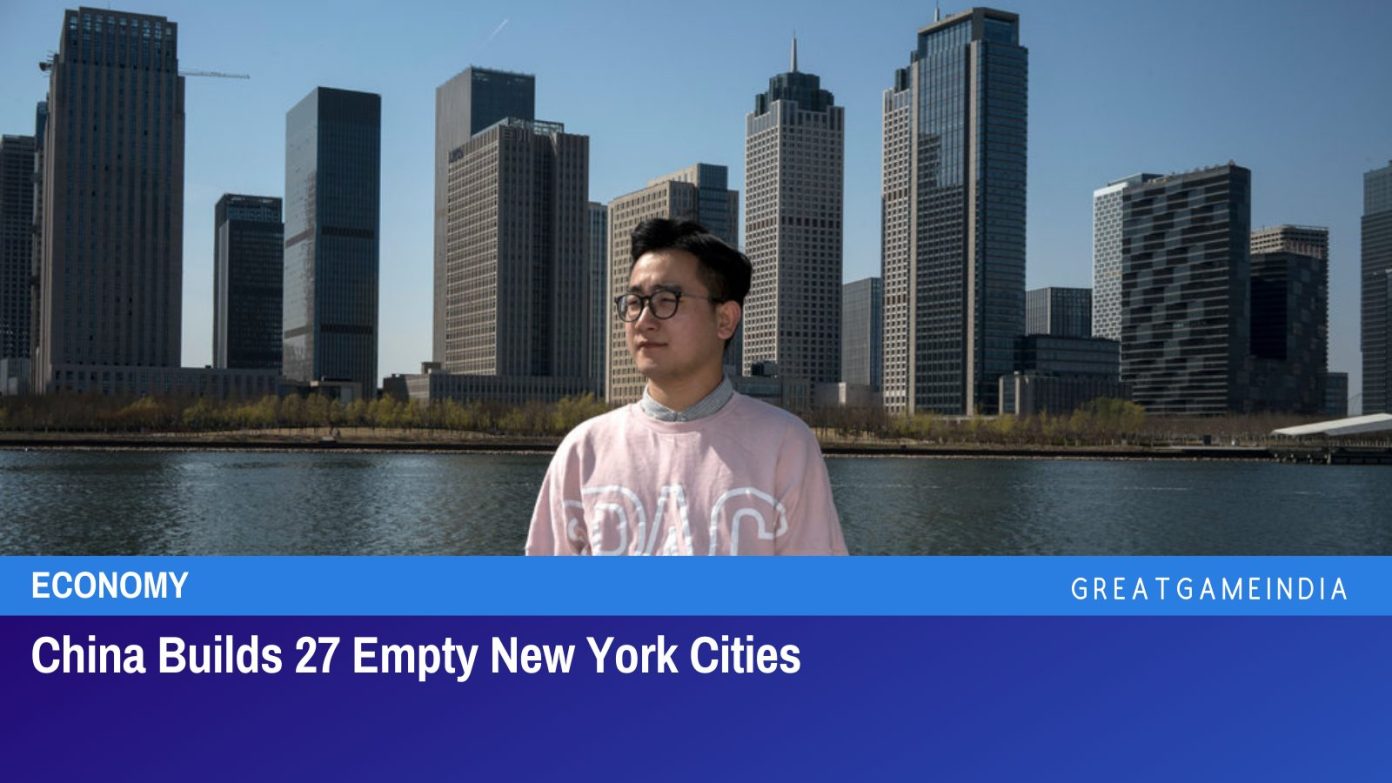 China has actually managed to build New York cities and not just one, but a staggering 27 empty ones. This by no means is an ordinary feat.

To you, what does this imply? The waste of so many resources has a lot of knock-on effects. Be thankful that you don’t have to worry about wicked genies suddenly branding you with mortgaged deeds as you go through a mental exercise to learn more about the disastrous repercussions of credit bubbles.

That may be frightening. Consider the possibility that a vengeful genie has taken a disliking to you. What could be a more heinous act of malicious magic than the genie handing you the deeds to China’s staggering inventory of 70 million unoccupied apartment complexes amassing dust?

You may believe it will make you a millionaire, a real estate mogul on par with Donald Trump. But reconsider.

This could be a good time to relay an unexpectedly nice storey Trump told about himself during the late 1980s and early 1990s savings and loan crisis. At the time, 1,043 of the 3,234 savings and loan associations in the United States collapsed as they attempted to absorb billions of dollars in over-mortgaged real estate properties.

Trump was out wandering the streets of Manhattan’s Upper East Side one evening with his girlfriend at the time. They came across a bum in a ragged peacoat resting on a grate as they walked. Trump remarked to his companion, “That guy has $1 billion more than I do.” She responded, “But he doesn’t look like he has a penny.” Trump replied, “He doesn’t.”

Trump’s riches was held captive by the banks, to whom he owed nearly a billion dollars more than his assets would have sold for in a fire sale, at the time he said that. Because Trump isn’t known for making jokes about himself, I characterize this as “an uncharacteristically charming story.” Despite this, he reaffirmed in a conversation with me that the above account I’m sharing with you is correct. It displays Trump at his best, jokingly acknowledging the ramifications of double-entry accounting.

With all that in perspective, how could you possibly manage to pay the construction mortgages on the 70 million apartment units deeded to you by the evil genie that have no residents? This is a difficult question. You’d have to do some quick talking with Chinese banks, similar to what Trump did with New York banks during the S&L crisis decades ago.

Your only chance of evading being drawn into a black hole of debt defaults is to employ some cunning crooks dressed as accountants to help you convince the banks to give you additional billions (or, more likely, trillions) to put off the inevitable reckoning. It’s worth noting that the degree to which you achieve would exacerbate the overall malinvestment problem. Adding more debt to your assets would not improve them in any way. They’d only get more expensive.

That’s a question worth at least $36.4 trillion. It may be a $45.9 trillion or even $116.6 trillion question. The proper answer is contingent on China’s current debt level. The Chinese bad debt crisis is 1,000 times bigger than Trump’s challenge three decades ago, when the systemic debt issue was measured in billions of dollars.

Professor Victor Shih of the University of California, San Diego, is quoted in Forbes. According to Shih, China ‘s declared debt estimates are terribly inadequate.

In 2017, Shih estimated total Chinese debt to be $45.9 trillion, or 328 percent of GDP (reported as $14 trillion). According to Shih, “total interest payments from June 2016 to June 2017 exceeded the incremental increase in nominal GDP by roughly 8 trillion RMB.”

If that’s the case, it’s a sign that the end is approaching. However, as bleak as it seems, the reality could be considerably more so.

You don’t accept official statistics at surface level if you’re a connoisseur of forbidden facts like me. You keep looking for clues that will lead you to the truth. Chinese government statistics, in my opinion, are just as skewed as those in the United States. Even more so.

Professor Christopher Balding of Peking University’s HSBC Business School, who has excellent contacts in the People’s Bank of China’s (PBOC) Financial Stability Board, recently performed some subversive arithmetic by mixing “on balance sheet assets” and “off-balance sheet assets.” Debts are liabilities for the borrowers, while they are assets for the lenders.

He comes to the conclusion that China’s overall debt is a staggering 833 percent of GDP. This equates to a debt of almost $116.6 trillion.

Official data imply that the true debt level is three and a half times greater. China’s debt is 260 percent of GDP ($36.4 trillion), according to the National Development and Reform Commission. The International Monetary Fund (IMF) adopts a 230 percent lower official estimate. Assume, however, that Balding’s estimate of 833 percent is right. In such scenario, this is a critical issue for the global economy as well as your investments.

Keep in mind that Chinese interest rates are not as low as those in the United States or as negative as those in Europe and Japan. Assume that the average interest rate paid is the same as the 3.5 percent short-term interbank deposit rate. “This would imply financial services costs to the economy of 29% nominal GDP,” Balding observes. It’s a big nut to crack. Even Chinese growth rates would fall short of meeting 29 percent annual carrying expenses.

Is there a chance that Balding is correct?

Yes. There are various indications that he is.

This adds to the idea that the true debt amount has been understated. It also entails, in Balding’s words, that “official on balance sheet financial figures are wildly wrong with disastrous consequences.” He warns, “This implies that we need to rethink the entire story of Chinese development and finance since probably about 2000.”

Balding continues: “Excessive indebtedness is distributed in virtually every sector of the economy. Before, if there was a shock to the corporate sector, householders and the government could step in and help. However, virtually no sector of the Chinese economy does not have an enormous indebtedness. Distributing it throughout simply lowers the capacity to handle a shock.”

Talking of “shocks,” it should come as no surprise that Balding was sacked from his position at Peking University after expressing his conclusion that China’s overall debt has risen to 833 percent of nominal GDP, based on PBOC data.

Professor Balding’s termination is as close as you can get to official affirmation that his calculations are true in a corrupt society wherein individuals possess trillions of incentives to deceive about the economy (and many have no doubt lost their lives for failing to heed them).

Balding’s disclosures can be summarized as follows: no one appears to know who owes what to whom or how much money can be resolved before the Chinese house of cards crashes. Bad debt in China’s banking system is estimated to be as much as 50% of GDP, or $7 trillion. More than enough to bring the banking system to its knees.

The asset bubble in China is about to burst. I doubt any Chinese tycoons are wandering Shanghai’s streets with their girlfriends, cracking jokes about street people being a trillion yuan richer than they are. This highlights a concern when a country’s government expands debt beyond the scale of assets possessed by even the wealthiest individuals. That makes it all the more unlikely that mortgaged assets may be repaid while still being encumbered with debt at this level.