Prepare For Change
Home Be the Change! Star Being Reconciliations Beginning to Happen in the Field

In the planetary shift right now, it’s complex and convoluted, largely because of various ongoing Star Being agendas here, from the original intervention by the reptilians to the hybridisation of Homo Sapiens by the Annunaki and Greys. Meanwhile, various others, like the Pleiadians, Arcturians, and Androemdans have provided a realigning balancing energy. For a higher harmony to happen on the planet, reconciliations at the field level need to happen. I do believe we’re witnessing the early signs of that.

One of the most important of motivations by the higher dimensionals supporting Earth’s planetary shift, is reconciliation between the various Star Being Nations in the multidimensional field that have shaped Earth’s history.

High Level of Star Being Involvement on Earth

What we need to grasp and understand, is the high-level involvement of the Star Being Nations on earth and their various conflicting agendas have so muddied the genetic waters here, which has happened since very early times. Earth is a rich and diverse genetic landscape, tremendously abundant with resources. That’s why they came. That’s why they got involved. That’s why they’ve manipulated the natural path of the planet.

It’s an old story in the galaxy. These groups, such as the Annunaki, had evolved enough to become highly sophisticated energetic architects. Yet not advanced enough (at the time) to realise that true power comes only by surrendering to the natural cycles of continual reincarnation until you escape the cycles of death and rebirth. Then you’re dancing down the blade edge of life, completely at one with the universe. This can only happen through copious cycles of surrender.

The galaxy is literally teaming with various Star Being groups, all of different harmonies and frequencies, all at various levels of evolution. Plenty connect in harmony and community with each other. At the same time, plenty compete, and even go to war. Unfortunately, the battleground has found its way to earth. Which is exactly why there are so many conflicting and complex dynamics going on, that play out in the field and in the human psyche. It’s why emergence of soul is so utterly essential, and why at times, it can be so hard.

Realignment definitely can be done. And reconciliation between the various ET groups can happen. On consecutive Openhand pilgrimages down the Nile, through the karmic history of Atlantis, we connected particularly with the ancient architects, the Annunaki, and helped them realise the error of their ways: of manipulation, hybridisation, and control. I’m pleased to say plenty of the species peeled away from the intervention, realigned, and most importantly, are now choosing to side with the movement of benevolence. They’re helping decommission the controlling technology they installed. This newly evolved group is now calling themselves the “Anu”, wishing to depart from the intervention ways of the past. 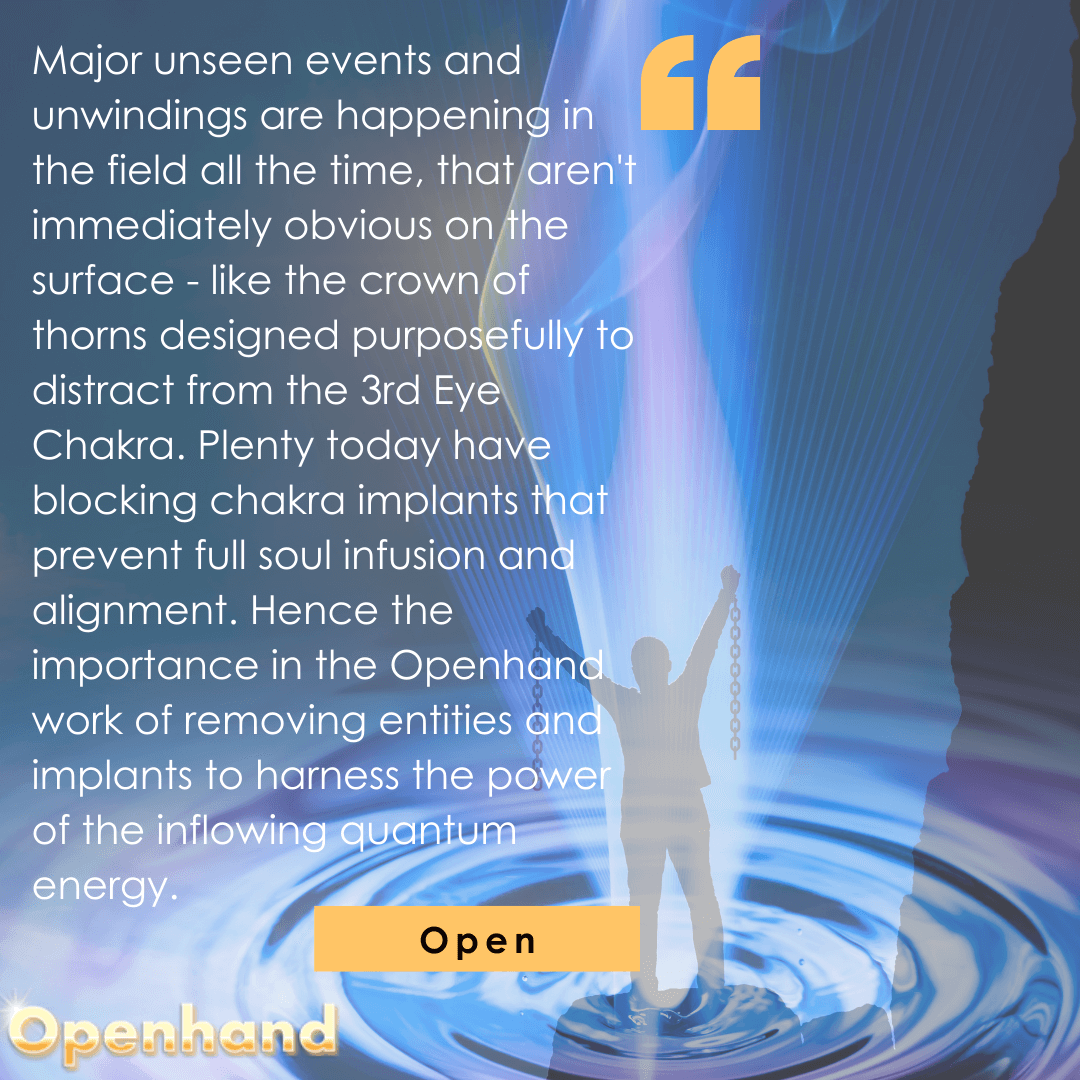 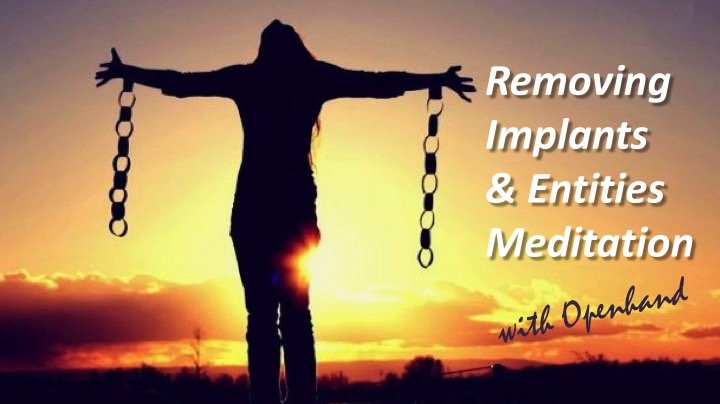 It’s a tremendously positive movement. They specifically know how the technology works; how it is embedded and bound into the wider field. So they also know how it can be expediently removed. This should greatly speed up energetic realignment and the feeling sense of opening and freedom in the field.

For sure, this is already impacting human consciousness in a benevolent way – where we’re witnessing a huge and widespread uprising against the Old Paradigm: in China and Iran for example.

What’s essential now for evolving people, and especially those able to communicate with these ET groups, is NOT to polarise and judge. NOT to demonise for the karmic errors of the past. Why? Firstly it’s highly self-limiting. It creates identity, within yourself, about that which you are judging. Secondly, it further muddies the waters. It perpetuates the struggle and the warring. When you can empathise with your “enemy” to the degree you can feel his pain, then the likelihood is, he ceases to be your enemy. Eventually, he ceases to fight you.

No Black and White: Each Soul Blends Different Frequencies

What we also need to realise is that each soul here on the planet is working through their own grey areas of karma. Unconsciousness will pull in one direction, the soul in another. Take, for example, high-level political, business and spiritual leaders on the planet. I can practically guarantee that most, if not all, are being influenced in one way or another, by these various ET groups in the field.

Take for example Elon Musk. He’s clearly a leading proponent of Transhumanism – augmenting the human body with technology. His company SpaceX is responsible for the quite heinous irradiation of our planet through the new 5Jeez satellites. It’s clear to me that he embodies a very Sirian/old Annunaki energy in this regard. However, he also embodies other soul frequencies: he’s quirky, altruistic, and highly erudite, but also quite awkward at times in how he expresses himself. This energy is much more akin to the Arcturians.

The point is that each soul is a blend of different frequencies. Musk claims to be a free-speech absolutist. It would definitely seem he is going that way with Twitter 2. Plenty of the banned accounts are being reinstated. On Friday past, he released the ‘Twitter files’ confirming what Donald Trump and many conservatives had long suspected, but could not prove: that the Biden campaign colluded with social media companies to shut down reporting on the contents of Hunter Biden’s laptop, embarrassing his father, the now-president Joe Biden (check the article detail here).

So on which side does Elon Bat? Is he a Trojan or White Hat? It’s superficial and blinkered to claim. It depends on what frequencies of soul, or karma, are being expressed at the time. It depends entirely upon actions at the time. Intervention energies will play on the desire and passion to shape humanity’s future in what his ego considers a benevolent way: to help humanity thrive further afield in the galaxy; to augment the human form from considered limiting weaknesses, illnesses or ailments. Likewise, the emergent soul in him is expressing freedom from censorship with Twitter 2. And if he does integrate a true cryptocurrency like Dogecoin, which is rumoured, then you have a peer-to-peer communication and exchange platform outside of the bankrupt and unjust fiat system – the banksters much quaking in their boots at the very thought of it! 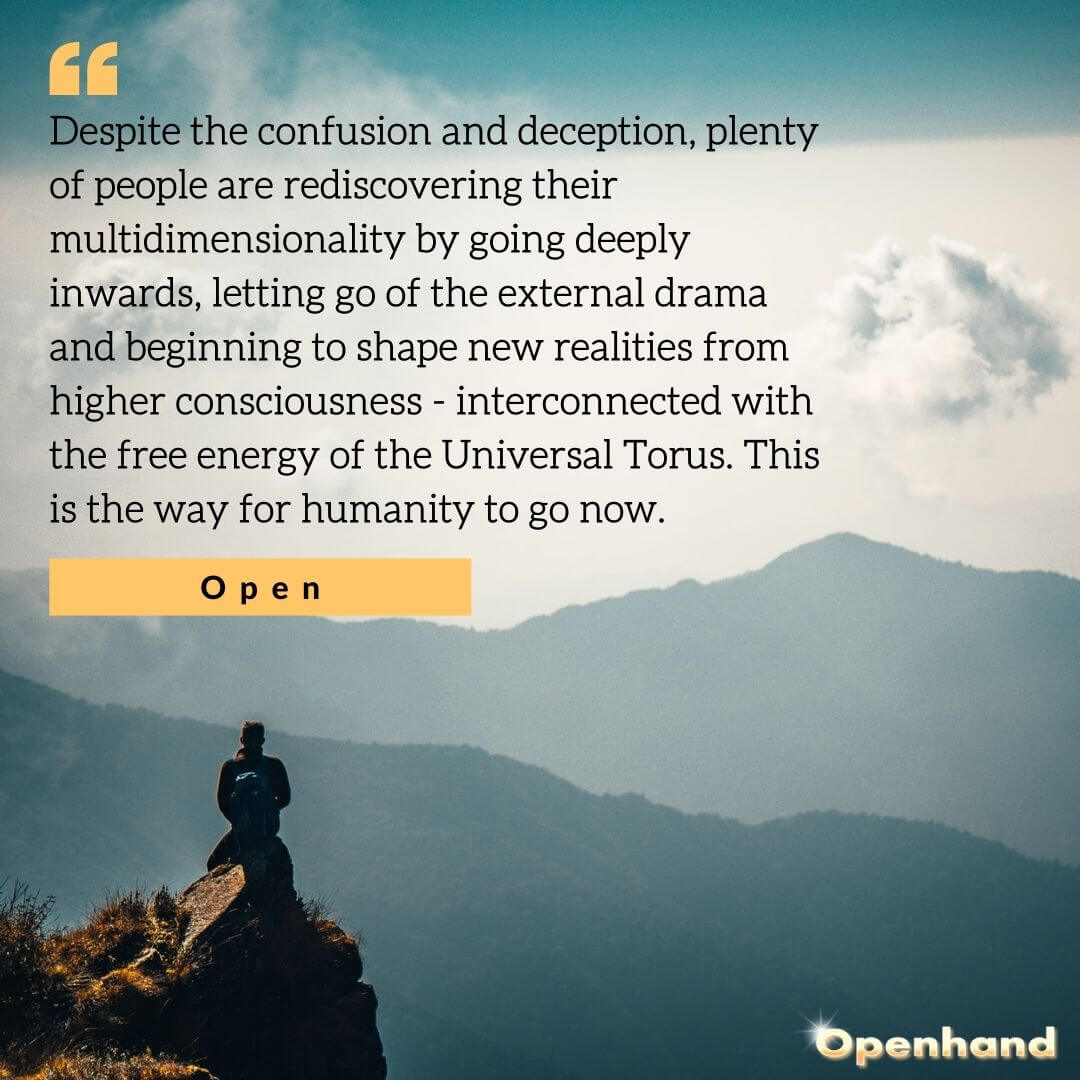 Let me be abundantly clear: I absolutely do not agree with Transhumanism – blending the humanoid form with machines. I actually think it is quite abhorrent, because it diminishes the natural carrier signals of the soul. And I am definitely, 100%, against the irradiation of our once beautiful planet with 5Jeez or any other derailing EMF. BUT, plenty of souls here carry that in their karma. They’re already highly addicted and dependent on their mobile phones, for example. Karma needs to create some kind of construct so the soul can integrate and emerge out – it has to experience the distortion, so as to ultimately reject it. 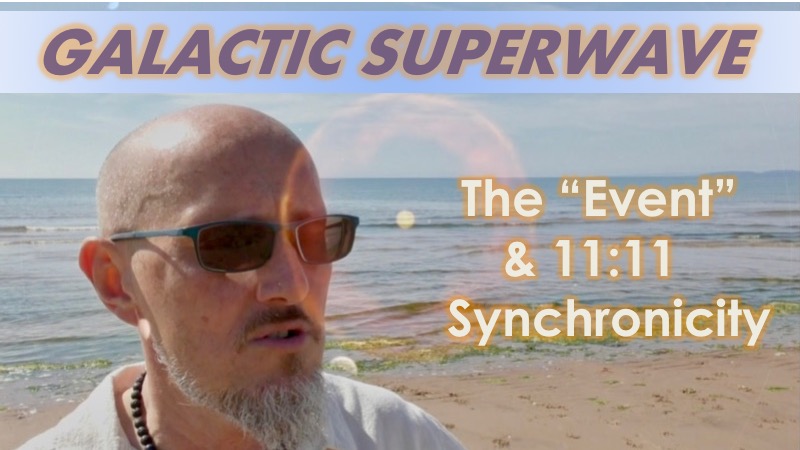 Sadly, to me, the way things are currently heading, a swathe of humanity will likely attempt to leave the planet in some kind of interstellar metaverse carried by NASA and SpaceX, where the soul is greatly suppressed. It’s probably known that a great convergence of the immanent Galactic Superwave, the Solar Micro Nova and the Pole Shift, will completely cleanse the 3D of sophisticated life.

But let’s be abundantly clear, many are not nearly ready for the evolutionary leap to 5D that’s necessary to ascend beyond the 3D catastrophe. They would likely choose to avoid this grand culmination. So in that context, is Musk a demon or an angel? Only a lower configuration of consciousness would judge.

We Must Unify in our Common Challenges

We’re at a point where the situation in the shift is highly mobile, volatile and complex. It’s a gordian knot of consciousness, which is why it’s so confusing. But the absolute miracle is that this gordian knot is beginning to unwind. At least some of the Star Being Nations are beginning to reconcile here…

It was always the benevolent plan – that wayward and disparate groups would incarnate within the human form and rather than only expressing their differences, have to empathise with each other and unify to effectively deal with the tremendous concluding convergence of the various galactic cycles that are now immanent.

We simply have to see beyond the polarisation of these various wayward groups and agendas. We must go beyond the demonisation. It’s going to take big hearts and an evolutionary leap. But if peace and harmony are what you truly seek, then it’s only by empathising with your “enemy” that this can possibly happen. That doesn’t mean being weak. There’s no need to compromise the soul. We must definitely stand up against what we feel at a soul level to be injustice. But we must also be willing to see the truth in the other’s karmic distortion. Then we empathise with them. Then we honour the soul in them, providing them the reflection and the opportunity to realign. Then we ALL win!