Prepare For Change
Home David Icke David Icke on Brexit – WE DID IT!! But This Is Just... 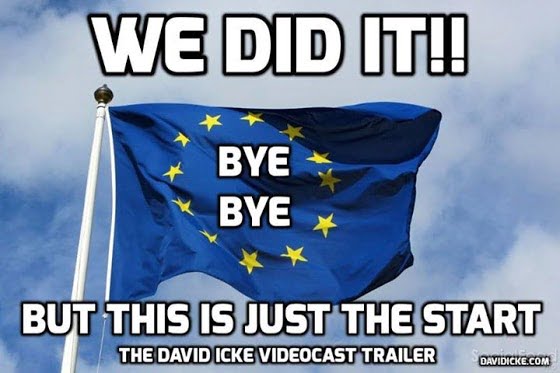 TZ here: I am listening to this as I post it. Heard 11:22 mins so far and agree entirely with what I hear. I was away a couple of days and just got in and saw this video that a reader on PFC, Marion, {thank you} had linked to the article I posted about Brexit a few days ago. Really recommend this to everyone on PFC. This is such a good sign that people are truly now waking up to the control they are subjected to on this prison planet and in this EU prison camp. Exaggerated words you might say. No NOT in the least!! I have heard nothing but fear propaganda on the Swedish media TV news re these results this weekend. Such disdain and contempt the politicians have for the people. You hear it all the time. They are in great shock because they thought that they were sitting tight. Listen to David and how they will try to manipulate people back into the EU prison camp with their fear manipulation tactics to scare people. Did you hear Juncker in the EU saying something like – “So don’t bother waiting for three months – give me your resignation papers now” – this is such a clear message. It showed me how scared they are: It shows that they are trying to scare people straight away with their threats!  http://www.independent.co.uk/news/uk/politics/brexit-latest-eu-referendum-juncker-article-50-when-will-uk-leave-not-an-amicable-divorce-a7102561.html

I totally agree with David that this is a truly tremendous sign that people are not going to accept being told what to do any longer. Their – the elite – threats do not frighten us any longer nor do we believe their idea of what reality should look like. Thank you to all of the people who voted to leave the EU and show the Greek people among many others that change is possible and we must not let them scare us back to being their sheeple people ever again.

Hear is the video podcast with David Icke – Enjoy!

WE DID IT!! But This Is Just The Start – The David Icke Videocast/Podcast trailer