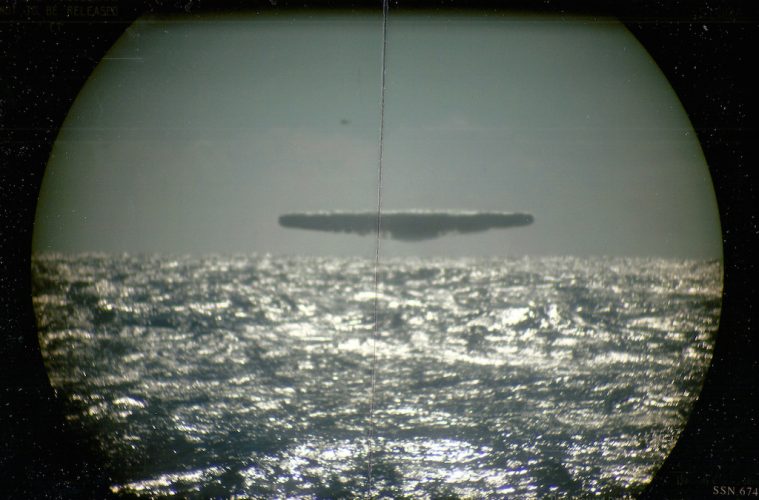 “If it does indeed turn out that there is relevant physical evidence, if this evidence is carefully collected and analyzed, and if this analysis leads to the identification of several facts concerning the UFO phenomenon, then will be the time for scientists to step back and ask, what are these facts trying to tell us? If those facts are strong enough to lead to a firm conclusion, then will be the time to confront the more bizarre questions. If, for instance, it turns out that all physical evidence is consistent with a mundane interpretation of the causes of UFO reports, there will be little reason to continue to speculate about the role of extraterrestrial beings. If, on the other hand, the analysis of physical evidence turns up very strong evidence that objects related with UFO reports were manufactured outside the solar system, then one must obviously consider very seriously that the phenomenon involves not only extraterrestrial vehicles but probably also extraterrestrial beings.” (source)

The quote above comes from Peter Andrew Sturrock, a British Scientist, and an Emeritus Professor of Applied Physics at Stanford University. Sturrock and a number of other notable scientists around the world came together during the 1990’s in order to examine the physical evidence that is commonly associated with the UFO phenomenon. One example used by Sturrock in his analysis, was a photo taken by two Royal Canadian Air Force pilots on August 27th, 1956, in McCleod, Alberta, Canada. (“Physical Evidence Related To UFO Reports” – The Sturrock Panel Report – Electromagnetic Effects) (source) (source)

The pilots were flying in a formation of four F86 Sabre jet aircraft. One of the pilots described the phenomenon as a “bright light which was sharply defined as disk-shaped,” that looked like “a shiny silver dollar sitting horizontal.” Another pilot managed to photograph the object, as you can see above.

The sighting lasted for a couple of minutes, and this specific case was analyzed by Dr. Bruce Maccabee, who estimated (from available data) that the luminosity of the object (the power output within the spectral range of the film) to be many megawatts. The Sturrock Panel also found it to be the case that a strong magnetic field surrounding the phenomenon or object was a common occurrence.

Maccabee published his analysis in the Journal of Scientific Exploration (“Optical Power Output of an Unidentified High Altitude Light Source,” published in the Journal of Scientific Exploration, vol. 13, #2, 1999).  He also published one in 1994 titled “Strong Magnetic Field Detected Following a Sighting of an Unidentified Flying Object,” in the same journal (8, #3, 347)

Dr. Jacques Vallee, notable for co-developing the first computerized mapping of Mars for NASA, and for his work at SRI International on the network information center for ARPANET, a precursor to the modern Internet, also published a paper in the Journal of Scientific Exploration titled “Estimates of Optical Power Output in Six Cases Of Unexplained Ariel Objects With Defined Luminosity Characteristics.” (source)(source)

This particular case is also referenced in this paper.

One thing is for certain, it’s one of multiple strange phenomena that has and continues to interest a large portion of the scientific community.

Here is a video of former Canadian Defence Minister Paul Hellyer speaking about the fields around these objects, and what some of them were doing to military planes.

Let’s just be clear, these objects are commonly seen, tracked on air radar, and tracked on ground radar simultaneously. This is something that has happened hundreds, if not thousands of times. This is information that’s been made public over the past few years.

For example, a declassified Defence Intelligence Agency document shows one (out of thousands) great example. It details how two F-4 interceptor pilots reported seeing an object visually, it was also tracked on their airborne radar. Both planes experienced critical instrumentation and electronics going offline at a distance of twenty-five miles from the object. Here is an excerpt from the report:

“As the F-4 approached a range of 25 nautical miles it lost all instrumentation and communications. When the F-4 turned away from the object and apparently was no longer a threat to it, the aircraft regained all instrumentation and communications. Another brightly lighted object came out of the original object. The second object headed straight toward the F4. ”   (source)

The report also described how a smaller object detached from the bigger object, turned inside the arc of the F-4 itself, and then rejoined the original object. This incident lasted for several hours. I decided to use this example because it has a number of declassified supporting national security documents, which goes to show how seriously this event was taken.

“Behind the scenes, high ranking Air Force officers are soberly concerned about UFOs. But through official secrecy and ridicule, many citizens are led to believe the unknown flying objects are nonsense.” Former head of the CIA, Roscoe Hillenkoetter, 1960 (source, NY Times)

It’s only now that more people are starting to become aware of this information. Here is a quote from Senator Barry Goldwater before the de-classification of all of these files:

“This thing has gotten so highly-classified… it is just impossible to get anything on it. I have no idea who controls the flow of need-to-know because, frankly, I was told in such an emphatic way that it was none of my business that I’ve never tried to make it to be my business since. I have been interested in this subject for a long time and I do know that whatever the Air Force has on the subject is going to remain highly classified.” – Senator Barry Goldwater, Chairman of the Senate Intelligence Committee (source)

Take a look at the picture above (see the film footage from video below). What you’re looking at is an irrefutably legitimate photo of an Unidentified Flying Object (UFO). It comes from the video that’s linked below. The shot was taken from the Hessdalen Interactive Observatory in Norway, which is an observatory that’s used by scientists at the University of Ostfold, Hessdalen. It is the only 24 hour UFO observatory in the world. Powered by an automatic high definition camera, it takes multiple pictures every single minute to capture and examine the strange aerial phenomena in the area that people have been reporting for years.

“The light phenomena here in Hessdalen in Norway started in late ’81 with a lot of sightings, at the most it was 20 sightings a week. The local people here started to see the light down in the valley, sometimes close to their houses and they were wondering what could this be. Some was a little bit afraid too, because no one could give them an answer, what could it be?” – Sc.EE Erling Strand, University of Ostfold (source)

“The phenomena behaves very different. Some is moving very slowly and some lights can move very fast. The fastest speed we have ever measured was 30,000 km an hour.” – Erling Strand (source)

Yes, you read that correctly: 30,000 km per hour. This is significantly faster than the highest capability of any known manmade aircraft. Yet this is merely one example, out of thousands, of strange objects being documented performing, as UFO Research Richard Dolan said at the Citizens Hearing that took place in Washington, D.C., “impossible maneuvers at incomprehensible speeds.”

The footage is from the observatory, as featured in the documentary The Day Before Disclosure:

We knew that the Earth was flat, we knew that we were the center of the universe, and we knew that a man-made heavier than air piece of machinery could not take flight. Through all stages of human history, intellectual authorities have pronounced their supremacy by ridiculing or suppressing elements of reality that simply didn’t fit within the framework of accepted knowledge. . . . But are we really any different today? Have we really changed our acceptance towards the things that won’t fit the frame? Maybe there are concepts of our reality we have yet to understand, and if we open our eyes maybe we will see that something significant has been overlooked. – (source) Terje Toftene, producer and director of the film (start at 3:99)

The production company behind the film is New Paradigm Films, and they are well aware of the fact that, soon enough, modern civilization is likely to be confronted with the biggest paradigm shift regarding our perception of reality that has been seen in human history. Through their films, they wish to shed light on serious issues that have remained in the dark for too long.

48:35 is the starting time for the video footage of the picture that this article is referring to, the video should already automatically start at that time.

“There are objects in our atmosphere which are technically miles in advance of anything we can deploy, that we have no means of stopping them coming here . . [and] there is a serious possibility that we are being visiting and have been visited for many years by people from outer space, from other civilizations. . . . This should be the subject of rigorous scientific investigation and not the subject of ‘rubbishing’ by tabloid newspapers.” – Lord Admiral Hill-Norton, Former Chief of Defence Staff, 5 Star Admiral of the Royal Navy, Chairman of the NATO Military Committee (source)

The pictures below come from investigator/researcher Alex Mistretta, who can be contacted at: [email protected]. Apparently, they are from a United States Navy submarine, taken in March of 1971. The Sumarine was the Navy’s USS Trepang (SSN 674). The submarine came upon the object by “accident,” as they were in the region on a routine joint military and scientific expedition. Officer John Klika was the one who initially spotted the object with the periscope.

I am not saying that these pictures are real, in fact, they might not be. The point here is to give readers a taste of what military pilots commonly describe, and what is commonly picked up on military radar. That’s why I wanted to show these pictures in the first place, to spark your imagination with what could be ‘fake’ pictures, of a very real phenomenon, and for those who have not had the experience of seeing something like this.

“In one of the cases during the cold war, 1961, there were about 50 UFOs in formation flying South from Russia across Europe. The supreme allied commander was very concerned and was about ready to press the panic button when they turned around and went back over the North Pole. They decided to do an investigation and they investigated for three years and they decided that with absolute certainty that four different species, at least, have been visiting this planet for thousands of years. There’s been a lot more activity in the past two decades, especially since we invented the atomic bomb. They are very concerned about that and if we will use it again, because the whole cosmos is in unity and it affects not just us but other people in the cosmos. They’re very much afraid that we might start using atomic weapons again and this would be very bad for us, and them also.” –Paul Hellyer, Former Canadian Defence Minister (source)

2 thoughts on “WHAT DOES A REAL ‘UFO’ LOOK LIKE? THESE 9 ASTONISHING PICTURES WILL GIVE YOU AN IDEA”