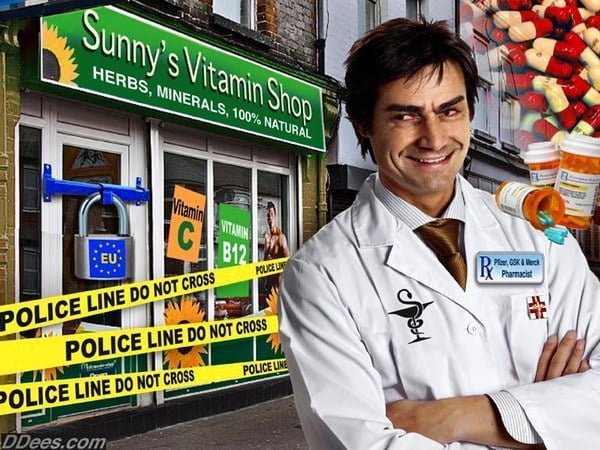 In 1994, after a lifelong aversion to politics, I ran for a seat in the US Congress out of the 29th District in Los Angeles. My platform was Health Freedom.

At the time, the FDA was raiding offices of natural practitioners, and threatening to cut off citizens’ access to a full range of nutritional supplements.

I watched a trial, if you can call it that, in downtown Los Angeles, in which the federal government was prosecuting a young man for selling, and making health claims about, a substance that occurs naturally in the body.

The defendant told the Judge he was prepared to present extensive evidence that the substance was safe and effective. The Judge refused, saying the only issue was: did the defendant violate an FDA rule? If so, he was guilty.

At that point, the trial was over, and indeed, the Judge soon pronounced a verdict and the young man was led away to serve a prison sentence in a federal lockup.

At that moment, I began to construct my case against the State, and consider what Health Freedom was all about.

Let’s start here. The FDA, the CDC, and several other federal agencies have blood on their hands. This blood doesn’t wash away.

On July 26, 2000, Dr. Barbara Starfield, a revered public health expert at the Johns Hopkins School of Public Health, published a review in the Journal of the American Medical Association: “Is US Health Really the Best in the World?”

Starfield concluded that that US medical system kills 225,000 Americans a year. That would extrapolate to 2.25 MILLION deaths per decade. I subsequently interviewed Starfield (2009), and she told me the US government has never made a significant effort to end this ongoing holocaust.

So, when the government talks about FDA rules governing safety and efficacy of treatments, they should be referring to their own crimes, since, for example, FDA-approved medicines are responsible for roughly half the 2.25 million deaths per decade.

On the other hand, natural health treatments kill virtually no one.

And here is where the situation becomes basic. The decision by a responsible adult, to manage his own health, by his own measure, and to seek out any other person to help him in that regard, is not the business of the State.

The legal aspect of this is clear: contracts vs. licenses. The State has no Constitutional right to turn its licensing procedures into monopolies.

On the other hand, two consenting adults can designate each other “patient” and “healer,” accepting full responsibility, with no future liability attached, for the outcome of their treatment-arrangement (contract).

The State has no Constitutional right to stick its nose into this business.

Obviously, the government front of “we can’t let people try to heal themselves apart from licensed practitioners, we must protect the people” is a piece of phony propaganda.

It’s a piece of Nanny-Mommy-Daddy State bullsh*t. This country wasn’t founded on the premise of the government protecting everyone everywhere all the time.

The State has no right to presume it knows, in advance, what will happen when two responsible citizens decide to engage in their own healing contract.

There’s more. If one state in the Union decided to allow this form of responsible contract in the field of healing, people from all over the country would move there—seeking freedom.

As a result, the economy of that State would bloom. Other states, seeing this, would follow suit. There would be a genuine Health Freedom revolution…

And the government of the country could focus on an effort to stop killing people through medical interventions.

As for the people of America, their job is to stop giving in to a reflex-reaction of fear when they contemplate health freedom.

“Oh, we can’t just let people decide, on their terms, which health treatments to choose. That could lead to terrible consequences.”

The terrible consequences are right in front of your face. They’re already here. They stem from the federal government’s attempt to run a monopoly on healing, which turns out to be a killing field.

That’s the result of rules and regulations set by the experts.

There is no State Mommy or Daddy decreed by some higher power.

About the author: Jon Rappoport has worked as a free-lance investigative reporter for over 30 years. To read about Jon’s mega-collection, Power Outside The Matrix, click here.