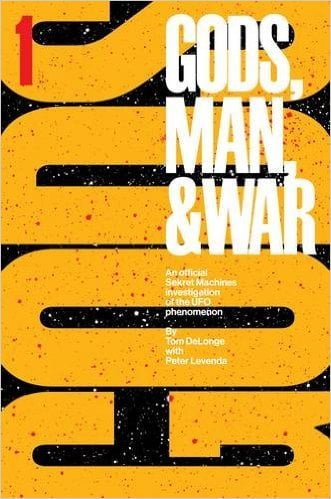 (Sunday, February 26, 2017.  http://www.coasttocoastam.com/show/2017/02/26.  I have the coast insiders subscription which has a small fee to listen to any of their shows.  Search to see if you can hear this show because it was quite interesting and revealed several times that there will be a major announcement within the next 60-90 day.  I’ve copied the Coast to Coast introduction and the 2 Book’s information.  Books are available at books stores or on Amazon)

Last March on Coast to Coast, rock star-turned UFO investigator Tom DeLonge first unveiled his plan to launch an unprecedented disclosure effort involving a cadre of high level government and military officials. Now, a year later, he and his co-author Peter Levenda have a new non-fiction book out, and joined George Knapp for the entire program to reveal a far-reaching examination of the historical, cultural, and religious threads that bind modern humans to the UFO mystery. Some of the names of DeLonge’s insider contacts were revealed in the WikiLeaks emails of Clinton campaign manager John Podesta, and one of the contacts reportedly spoke of a recovered life-form.

According to the information DeLonge received, there are multiple races of beings visiting Earth, some for thousands of years or more, and they don’t necessarily get along with each other. Levenda compared the contact between these beings and humans as akin to a Cargo Cult, in which religions are created around what is perceived as a supernatural event. In regards to concerns that government insiders could be feeding disinformation to DeLonge, Levenda noted that DeLonge respectfully came to them, rather than the insiders seeking him out.

Interestingly, several of DeLonge’s insider sources mentioned Greek mythology, implying that one of the alien races was actually the Gods of that ancient era, making themselves visibly known and intervening in human affairs. “That’s when we got the Greek alphabet, democracy…and the architecture,” DeLonge said, and “we’ve been living off the information the intelligence has been giving us as they pop up from time to time.” The notion that humanity was created as a slave race dates back to Sumerian records, and interbreeding between gods and humans is referenced in the Bible with the Nephilim, Levenda pointed out, adding that there is evidence by Russian scientists that the genetic code was actually artificially created.

Much of this has been kept secret by the powers-that-be because the idea that humans were created by another species, and are not in complete control is so disturbing, DeLonge remarked. Ancient records also describe wars between gods, and humans could be “the victims of a proxy war,” he continued, citing how one of his contacts compared two of the alien species to the angels and demons of the Bible. In general, the alien agenda seems to concern empire building and resource extraction, he added. DeLonge was recently named UFO Researcher of the Year by OpenMinds.tv (view related video). For more, read the foreword (PDF) to DeLonge’s first Sekret Machines book written by Jim Semivan, a former Senior CIA Officer.

Did you miss out on hearing this fascinating conversation? Sign up for Coast Insider and you can check out this program and many more enlightening shows in our vast archive.

Here are the two books referenced:

Praised as “an exhilarating thrill ride” that may never have you looking at the night sky the same way again, Chasing Shadows is the first book in the multimedia Sekret Machines franchise that will reveal fascinating secrets surrounding the true, well-documented events of Unidentified Aerial Phenomenon. Written by award-winning creator Tom DeLonge and NYTimes bestselling academic AJ Hartley in a powerful collaboration with top government advisors that keep the truth on course in this historical thriller.

For those who know…

that something is going on…

The witnesses are legion, scattered across the world and dotted through history, people who looked up and saw something impossible lighting up the night sky. What those objects were, where they came from, and who—or what—might be inside them is the subject of fierce debate and equally fierce mockery, so that most who glimpsed them came to wish they hadn’t.

Most, but not everyone.

Among those who know what they’ve seen, and—like the toll of a bell that can’t be unrung—are forever changed by it, are a pilot, an heiress, a journalist, and a prisoner of war. From the waning days of the 20th century’s final great war to the fraught fields of Afghanistan to the otherworldly secrets hidden amid Nevada’s dusty neverlands—the truth that is out there will propel each of them into a labyrinth of otherworldly technology and the competing aims of those who might seek to prevent—or harness—these beings of unfathomable power. Because, as it turns out, we are not the only ones who can invent and build…and destroy.

Featuring actual events and other truths drawn from sources within the military and intelligence community, Tom DeLonge and A.J. Hartley offer a tale at once terrifying, fantastical, and perhaps all too real. Though it is, of course, a work of…fiction?

An exceptional examination that  “plays the role of an intellectual Indiana Jones, expertly guiding readers through crumbling, vine-laden Mayan temples; the stunning iconography of ancient Egypt and the esoteric creation myths of antediluvian India, Africa and China” written by award-winning author and producer Tom DeLonge with renowned research author Peter Levenda.  Sekret Machines: GODS will take you on an eye-opening journey that transcends speculation and is based on unprecedented access to officials at the highest levels of government, military and industrial agencies who have provided insights and assistance never before experienced by any researchers in this controversial field.  GODS takes us beyond speculation to certain knowledge of what exactly lies at the heart of the most important Phenomenon ever to confront human understanding.

The first volume in Gods, Man & War, GODS introduces the reader to some of the critical issues that are foundational to an intelligent and enlightened grasp of the revelations that will follow in the next two volumes.  There is another Force in the universe of our Reality, another context for comprehending what has been going on for millennia and especially in the last seventy years.  Sekret Machines is the result of input from scientists, engineers, intelligence officers, and military officials — a group we call the Advisors —  and transcends the speculation of journalists, historians and others whose conclusions are often either misinformed or only tease around the edges of the Sekret Machines. The reader will not discover wild theories or unfounded claims, but instead will confront a solid — if often unsettling — reality, one that demands the collaboration of all of us in every field of human endeavor if we are to understand it and manage its effects.

If nothing else, readers will come to the conclusion that the Phenomenon is not what they think it is.  It is, in fact, much more serious and potentially much more threatening than they can imagine.

Sekret Machines: GODS is volume one of the companion investigation series to the bestselling fiction thriller Sekret Machines: Chasing Shadows by DeLonge and NYTimes bestselling author AJ Hartley.  The whole is truly greater than the sum of its parts.  Read together, the thriller series and the investigation series show what cannot be revealed with one approach alone.