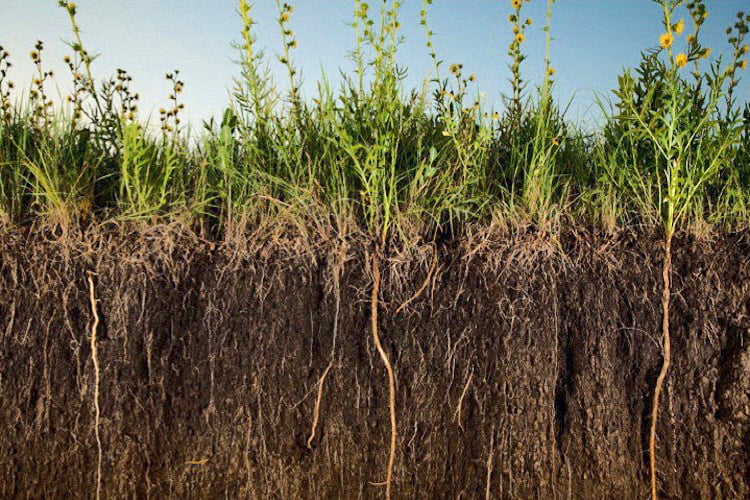 Geoengineering has been back in the news recently after the US National Research Council endorsed a proposal to envelop the planet in a layer of sulphate aerosols to reduce solar radiation and cool the atmosphere.

The proposal has been widely criticised for possible unintended consequences, such as ozone depletion, ocean acidification and reduced rainfall in the tropics. Perhaps even more troubling, geoengineering is a technological fix that leaves the economic and industrial system causing climate change untouched.

Regenerative agriculture comprises an array of techniques that rebuild soil and, in the process, sequester carbon. Typically, it uses cover crops and perennials so that bare soil is never exposed, and grazes animals in ways that mimic animals in nature. It also offers ecological benefits far beyond carbon storage: it stops soil erosion, remineralises soil, protects the purity of groundwater and reduces damaging pesticide and fertiliser runoff.

But these methods are slow, expensive and impractical in feeding a growing population, right?

Wrong. While comprehensive statistics are hard to come by, yields from regenerative methods often exceed conventional yields (see here and here for scientific research, and here and here for anecdotal examples). Likewise, since these methods build soil, crowd out weeds and retain moisture, fertiliser and herbicide inputs can be reduced or eliminated entirely, resulting in higher profits for farmers. No-till methods can sequester as much as a ton of carbon per acre annually (2.5 tons/hectare). In the US alone, that could amount to nearly a quarter of current emissions.

Estimates of the total potential impact vary. Rattan Lal of Ohio State University argues that desertified and otherwise degraded soils could sequester up to 3bn tons of carbon per year (equal to 11bn tons of CO2, or nearly one third of current emissions). Other experts foresee even greater potential. According to research at the Rodale Institute, if instituted universally, organic regenerative techniques practiced on cultivated land could offset over 40% of global emissions, while practicing them on pasture land could offset 71%.

That adds up to land-based CO2 reduction of over 100% of current emissions – and that doesn’t even include reforestation and afforestation, which could offset another 10-15%, according to the Intergovernmental Panel on Climate Change. Of course, none of this is license to perpetuate a fossil fuel infrastructure, since there is an eventual limit to the amount of carbon that soil and biomass can store.

Given that they are better even from purely commercial considerations, why haven’t regenerative practices spread more quickly? An answer commonly offered by farmers themselves is that “people are slow to change.” Maybe so, but in this case there is more to it than that. Regenerative agriculture represents more than a shift of practices. It is also a shift in paradigm and in our basic relationship to nature – as a comparison with geoengineering highlights.

First, regenerative agriculture seeks to mimic nature, not dominate it. As Ray Archuleta, a soil-health specialist at the USDA, puts it, “We want to go away from control and command agriculture. We should farm in nature’s image.” In contrast, geoengineering seeks to take our centuries-long domination of nature to a new extreme, making the entire planet an object of manipulation.

Second, regenerative agriculture is a departure from linear thinking and its control of variables through mechanical and chemical means. It values the diversity of polycultures, in which animals and plants form a complex, symbiotic, robust system. Geoengineering, on the other hand, ignores the law of unintended consequences that plagues any attempt to engineer a highly nonlinear system. It exemplifies linear thinking: if the atmosphere is too warm, add a cooling factor. But who knows what will happen?

Third, regenerative agriculture seeks to address the deep basis of ecological health: the soil. It sees low fertility, runoff and other problems as symptoms, not the root problem. Geoengineering, on the other hand, addresses the symptom – global warming – while leaving the cause untouched.

There is No Quick Fix

Unlike geoengineering’s quick fix, regenerative agriculture cannot be implemented at scale without deep cultural changes. We must turn away from an attitude of nature-as-engineering-object to one of humble partnership. Whereas geoengineering is a global solution that feeds the logic of centralisation and the economics of globalism, regeneration of soil and forests is fundamentally local: forest by forest, farm by farm. These are not generic solutions, because the requirements of the land are unique to each place. Unsurprisingly, they are typically more labour-intensive than conventional practices, because they require a direct, intimate relationship to the land.

Ultimately, climate change challenges us to rethink our long-standing separation from nature in which we think we can endlessly engineer our way out of the damage we have caused. It is calling us back to our biophilia, our love of nature and of life, our desire to care for all beings whether or not they make greenhouse gas numbers go up or down.

Geoengineering, beyond its catastrophic risks, is an attempt to avoid that call, to extend the mindset of domination and control to new extremes, and to prolong an economy of overconsumption a few years longer. It is time to fall in love with the land, the soil, and the trees, to halt their destruction and to serve their restoration. It is time for agricultural policy and practice to become aligned with regeneration.

Charles Eisenstein is a teacher, speaker and writer. He is the author of Sacred Economics.