Prepare For Change
Home Awakening 10 Examples Proving The US Gov’t is an Expert at Turning Countries... 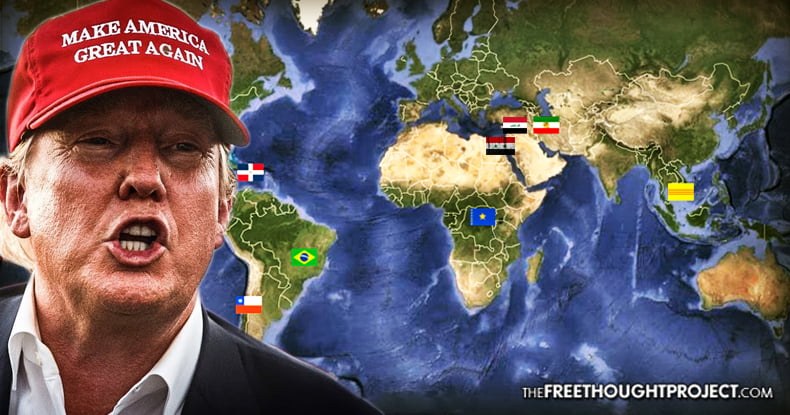 The mainstream media’s outrage over reports that President Trump referred to Haiti and El Salvador as “Shithole countries,” has gone above and beyond any outrage attributed to the fact that the United States has let its Central Intelligence Agency have free reign over the governments it overthrows and the countries the U.S. invades.

As a result, the countries that have received more than their share of “freedom” from the U.S. have turned into the very definition of “shithole” countries, and have spent years attempting to recover. Here are the top 10:

When Iranian Prime Minister Mohammed Mossadeq drew criticism for nationalizing the British oil company that was the precursor to BP and challenging the Shah, the CIA launched a coup to overthrow him. The State Department released a trove of documents in June that gave insight into the CIA’s role in the coup d’état.

The documents revealed that in a March 1953 memorandum to President Eisenhower, Director of Central Intelligence Allen Dulles listed “the elimination of Mossadeq by assassination or otherwise,” as a method of repairing ties with Iran, restoring oil negotiations, and stopping a “Communist takeover.”

After the U.S. overthrew Mossadeq, it guaranteed that Iran’s monarch, Mohammad Reza Shah Pahlavi, would become the head of the country. His oppressive rule led to the Iranian revolution, which resulted in “a brutally repressive regime in Iran, client terrorist groups around the Middle East, savage sectarian violence in Iraq and a nuclear standoff.”

When democratically-elected Guatemalan President Jacobo Arbenz challenged the United Fruit Company, a U.S. corporation, in order to call for laws that would be fair to Guatemalan farmers, the CIA stepped in. The agency overthrew Arbenz in 1954 and installed a military dictatorship in his place that resulted in a series of bloody U.S.-backed dictators.

It should be noted that Marxist revolutionary Che Guevara was in Guatemala at the time. He reportedly encouraged Cuban dictator Fidel Castro to “go the opposite direction” of Guatemala in order to stay in power, because the country’s free and open society was what “allowed the CIA to penetrate and overthrow Arbenz.”

When Patrice Lumumba, the first elected prime minister of the Democratic Republic of the Congo, led a campaign to oust the ruling Belgians from Congo, the U.S. responded by helping to overthrow and assassinate him.

Lumumba’s murder, which has been called the “most important political assassination of the 20th century,” was funded by the U.S and Belgium., employed partners in Congo, and was ultimately carried out by a Belgian execution squad. As The Guardian reported:

“The assassination took place at a time when the country had fallen under four separate governments: the central government in Kinshasa (then Léopoldville); a rival central government by Lumumba’s followers in Kisangani (then Stanleyville); and the secessionist regimes in the mineral-rich provinces of Katanga and South Kasai. Since Lumumba’s physical elimination had removed what the west saw as the major threat to their interests in the Congo, internationally-led efforts were undertaken to restore the authority of the moderate and pro-western regime in Kinshasa over the entire country. These resulted in ending the Lumumbist regime in Kisangani in August 1961, the secession of South Kasai in September 1962, and the Katanga secession in January 1963.”

When the U.S. didn’t approve of the political influences in Vietnam in the 1950s, it installed Ngo Dinh Diem as leader of the new “South Vietnam.” While he was not liked by the people, he allegedly won 98 percent of the vote.

The U.S. sponsored the overthrow and assassination of Diem in 1963, and then spent the next 10 years at war, fighting for the fictional government it created. The cost was hundreds of billions of dollars, nearly 60,000 American lives and around 2 million Vietnamese. A portion of the Pentagon Papers claimed that the U.S. is to blame for the deadly coup:

“For the military coup d’etat against Ngo Dinh Diem, the U.S. must accept its full share of responsibility. Beginning in August of 1963 we variously authorized, sanctioned and encouraged the coup efforts of the Vietnamese generals and offered full support for a successor government…. We maintained clandestine contact with them throughout the planning and execution of the coup and sought to review their operational plans and proposed new government.”

When Indonesian President Sukarno agreed to let the Communist Party have representation in his government, the U.S. responded by funding the murder of all “suspected communists” in 1965. The military became the most powerful establishment in the country, and Sukarno was overthrown in 1967.

Nearly half a million people were killed by military death squads in Indonesia in 1965, on the basis that they were “associated with the Communist Party.” In July 2016, an international panel of judges concluded that the killings qualified as “crimes against humanity,” and that the U.S., the United Kingdom and Australia were all complicit.

The U.S. spent nearly $4 million on 15 covert action projects in order to stop Marxist candidate Salvador Allende from winning Chile’s 1964 presidential election, after President Richard Nixon told the CIA to “make the economy scream” in Chile to “prevent Allende from coming to power or to unseat him.”

After another $1 million was spent during the 1970 election on spreading propaganda, the U.S. changed tactics, and launched a military coup. Former National Security Adviser Henry Kissinger is quoted saying, “I don’t see why we need to stand by and watch a country go communist due to the irresponsibility of its own people.”

In 1991, Haiti was celebrating the election of its first democratically elected president, Jean-Bertrand Aristide. However, just eight months later, Aristide would be overthrown by a military coup d’état. While the US government aided Aristide in escaping Haiti and seeking exile in France, Aristide eventually returned to Haiti and was re-elected, only to once again be forced to step down.

In an interview with Democracy Now, the twice deposed president accused the US of ‘kidnapping’ him. As he told Amy Goodman, “No, I didn’t resign. What some people call ‘resignation’ is a ‘new coup d’etat,’ or ‘modern kidnapping.‘”

The coup d’état against Aristide in 2004 wasn’t the first time the US Government involved itself in Haitian politics. From 1957 to 1986, the US supported the brutal regimes of Francois ‘Papa Doc’ Duvalier and his son Jean-Claude Duvalier. Haitians describe their regimes as a “Reign of Terror.” As Time reported:

His secret policemen, the Tontons Macoutes (Creole for “bogeymen”), murdered and tortured his opponents, sometimes leaving a victim’s severed head on display in a marketplace as a warning to others. They also collected unofficial taxes and tribute from cowed Haitian businessmen and peasants.

The U.S. invaded Iraq in 2003 to overthrow Iraqi President Saddam Hussein, based on the claims that he had weapons of mass destruction and ties to al-Qaeda.

It should be noted that while the CIA initially claimed that there were WMD’s in Iraq, in a final report released in 2005, the head of the Iraq Survey Group said, “After more than 18 months, the WMD investigation and debriefing of the WMD-related detainees has been exhausted. As matters now stand, the WMD investigation has gone as far as feasible.”

The opposition forces looking to overthrow Libyan President Muammar Gaddafi received support from then-Secretary of State Clinton. She even pushed President Obama to begin a bombing campaign in the country, in order to oust Gaddafi.

Obama has described U.S. intervention in Libya as the “worst mistake” of his presidency, namely “failing to plan” for the aftermath of Gaddafi’s defeat.

The Obama Administration announced in 2013 that the U.S. would begin providing weapons, equipment and training to “moderate Syrian rebels” in an effort to “keep the Syrian opposition going against forces aligned with President Bashar al-Assad’s regime.”

While Assad is still in power today, it is no secret that the U.S. has gone out of its way to overthrow him, and as a result, the Syrian Observatory for Human Rights has estimated that over 480,000 people have been killed, and the war-torn areas of Syria that have experienced involvement from the CIA now resemble exactly what President Trump would describe as a “shithole” country.