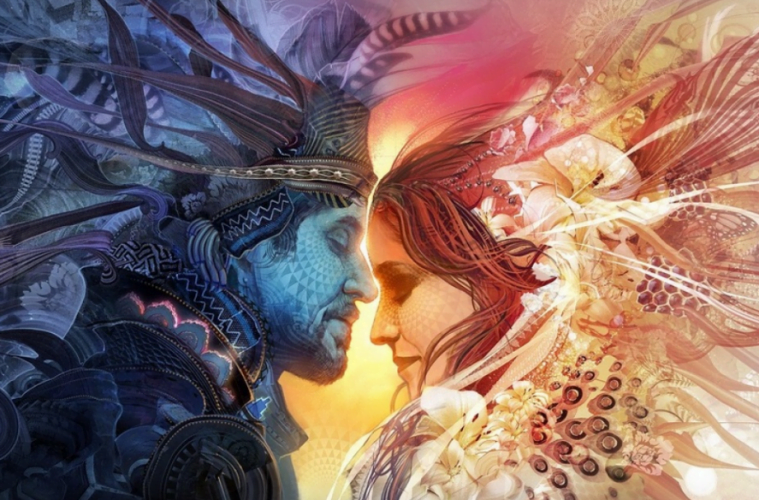 When the masculine and the feminine are in balance, there is fluidity, relationship, a flow of energy, unity, totality. This fluidity and balance is perhaps best illustrated by the Taoist image of the indissoluble relationship and complementarity of Yin and Yang. In the broadest terms, the feminine is a containing pattern of energy: receptive, connecting, holding things in relationship to each other; the masculine is an expanding pattern of energy: seeking extension, expansion towards what is beyond. More specifically, the feminine reflects the instinctual matrix and the feeling (heart) values of consciousness; the masculine reflects the questing, goal-defining, ordering, discriminating qualities of consciousness, generally associated with mind or intellect. For millennia women have lived closer to the first pattern; men to the second. But now, there is a deep impulse to balance these within ourselves and in our culture. There is an urgent need to temper the present over-emphasis on the masculine value with a conscious effort to integrate the feminine one.

In the ancient world the feminine principle in the image of the goddess stood for relationship – the hidden connection of all things to each other. Secondly, it stood for justice, wisdom and compassion. Thirdly, and most importantly, it was identified with the unseen dimension beyond the known world – a dimension that may be imagined as a matrix connecting invisible spirit with visible nature. The word used then to name this matrix was goddess; later it was soul. The feminine principle offered an image of the oneness, sacredness and inviolability of all life; the phenomenal world (nature, matter, body) was regarded as sacred because it was a theopany or manifestation of invisible spirit.

The greatest flaw in patriarchal civilisation has been the over-emphasis on the masculine archetype (identified with spirit) and the devaluation of the feminine one (identified with nature). This has been reflected in the fact that the god-head has no feminine dimension, in the consistent neglect of feeling values and in the misogyny responsible for the repression and suffering of women. The history of the last 4000 years has been forged by men, determined by male perspectives and directed towards goals defined by men – principally the goals of conquest and control. (this is no sense intended as a criticism; in the context of prevailing belief systems and general level of consciousness, things could not have been different).

However, religion and science – all our cultural ideas and patterns of behaviour – have developed from this unbalanced foundation. Throughout this time, everything designated as “feminine” (nature, body, woman) was devalued and repressed, including the rich diversity of the Pagan legacy of the ancient world. In the domain of religion, heretics were eliminated; diverse ways of relating directly to the transcendent were lost. Naturally, this has created a deep imbalance in the culture and in the human psyche. It has led finally to the tyrannies of this century where the lives of some 200 million people have been sacrificed to totalitarian regimes. We can see the brutal legacy of this imbalance in Afghanistan, Bosnia, Russia and now Kosovo. But we can also see it in the ethos that dominates Western culture. The modern tyrant is the extreme reflection of a deeply-rooted pathology derived from a long-standing cultural imbalance between the masculine and feminine archetypes and, at the human level, between men and women. I would like to read you this extract from a recent article:

“This is a world of monstrous tyranny. Everywhere there are governments which by design or neglect are starving people, wrecking their livelihoods, breaking up their families. Everywhere there is the oppression of women, of other races, of ways of life which are dear to people. Property is confiscated, villages are set on fire, disease and malnutrition left to rage unchecked. And what all these victims, tens of millions of them, have in common – what brings their suffering to the forefront of my indignation – is this: they did not ask for this; they cannot avoid this; there is nothing they can do to change this; they have no choice.” (Matthew Parris, The Times, London 6/9/98)

Where there is no relationship and balance between the masculine and feminine principles, the masculine principle becomes pathologically exaggerated, inflated; the feminine pathologically diminished, inarticulate, ineffective. The symptoms of a pathological masculine are rigidity, dogmatic inflexibility, omnipotence, and an obsession with or addiction to power and control. There will be a clear definition of goals but no receptivity to ideas and values that conflict with these goals. The horizon of the human imagination will be restricted by an overt or subtle censorship. We can see this pathology reflected today in the ruthless values that govern the media, politics, and the technological drive of the modern world. We can see the predatory impulse to acquire or to conquer new territory in the drive for global control of world markets, in the ideology of growth, in new technologies such as the genetic modification of food. We see exaggerated competitiveness – the drive to go further, grow faster, achieve more, acquire more, elevated to the status of a cult. There is contempt for the feeling values grounded in the experience of relationship with others and with the environment. There is a predatory and compulsive sexuality in both men and women who increasingly lose the capacity for relationship. There is continuous expansion in a linear sense but no expansion in depth, in insight. The pressure of things to do constantly accelerates.

What is the result? Exhaustion, anxiety, depression, illness which afflict more and more people. There is no time or place for human relationships. Above all, there is no time for relationship with the dimension of spirit. The water of life no longer flows. Men and women and, above all, children, become the victims of this harsh, competitive, uncaring ethos: women, in their disorientation, and because the feminine value has no clear definition or recognition in our culture, are drawn to copy the pathological image of the masculine which itself incorporates fear of the feminine.

Because to a large extent, this whole situation arises unconsciously, not much can be done about it until catastrophe intervenes. Reflecting on this, I remembered the following story:

Once, not long ago, there was a great drought in a province of China. The situation was catastrophic. The Catholics made processions, the Protestants made prayers, and the Chinese burned joss-sticks and shot off guns to frighten away the demons of the drought; but to no avail. Finally the people said: “We will fetch the rain-maker.” And from another province a dried up old man appeared. The only thing he asked for was a quiet little house somewhere, and there he locked himself in for three days. On the fourth day the clouds gathered and there was a great snow-storm at the time of year when no snow was expected – an unusual amount – and the town was filled with rumours about the wonderful rain-maker. Asked what he had been doing during the three days that had caused the snow to fall on the fourth he said: “I come from another country where things are in order. Here they are out of order; they are not as they should be by the ordinance of heaven. Therefore the whole country is not in Tao, and I also am not in the natural order of things because I am in a disordered country. So I had to wait three days until I was back in Tao and then naturally, the rain came.”

The rain-maker did not do anything. He waited until he was in balance. Then, his quality of being rectified the state of imbalance that existed around him. Perhaps we need to become rain-makers…

I feel we are living in a time of kairos – a mythic time of choice – a time of stupendous scientific discoveries which are enlarging our vision of the universe, shattering the vessel of our old concepts about the nature of reality. Yet the delicate organism of life on our planet and the survival of our species are threatened as never before by technologies driven by an ethos of the conquest and control of nature, technologies which are applied with an utter disregard of the perils of our interference with the complex web of relationships upon which the life of our planet depends. The choice is between clinging to an outworn and unbalanced ethos and maturing beyond it towards a more responsible and sensitive capacity for relationship. If we are unable to develop this empathic capacity to relate, we will surely destroy ourselves and the environment that sustains our life.

So how could we help to redress the balance between the masculine and feminine in ourselves and in our culture? First of all, where are we, as individuals out of balance? Where are we driven by the unbalanced cultural ethos of achieving power and control, ignoring our feelings of depression, anxiety or symptoms of the body’s distress? Are we allowing ourselves enough time for reflection, for relationships, for connection with a deeper dimension of reality? The priority as I see it is to make the fact of this pathology a matter of public discussion. Shift the emphasis from achieving power to achieving balance. Secondly, here are some suggestions for strengthening the feminine principle in our society.

I hear my inner voice talking to me,
Explaining, encouraging,
Opening the part of me that I thought was lost.
In this world of cruelty and fear little lights are burning.
Everyone has a flame inside their hearts,
If only they had the courage to find it.
The light can trickle out through a hole in your mind.
When the inside is out
You are transformed and revealed.
There is no need to be afraid,
But be curious
As you will probably never know
where the force is coming from. – Daniel Webster

Jonathan Schell wrote the following words in his book, The Fate of the Earth, “Because everything we do and everything we are is in jeopardy, every person is the right person to act and every moment is the right moment to begin.” Each of us is called to focus on rebalancing the masculine and feminine in ourselves and in our culture. This could effect a profound alchemy in our lives. Women and men could both participate in a process of transformation which could bring into being a new cultural focus whose emphasis is no longer on power and control but on relationship, balance and connectedness. The phrase “the conquest of nature” could be replaced by the awareness that humanity and nature participate in a deeper and still unknown reality that embraces them both.

At the end of The Undiscovered Self, Jung asks, “Does the individual know that he or she is the makeweight that tips the scales that infinitesimal unit on whom a world depends?” Millions of people have no choice. Those of us who do have a measure of choice could rise to the immense challenge of defining and living a new and responsible role in relation to each other and our planetary home.

Written by Anne Baring. Anne is a Jungian analyst – co-author of The Myth of the Goddess, The Mystic Vision and The Divine Feminine and author of The Birds Who Flew Beyond Time.