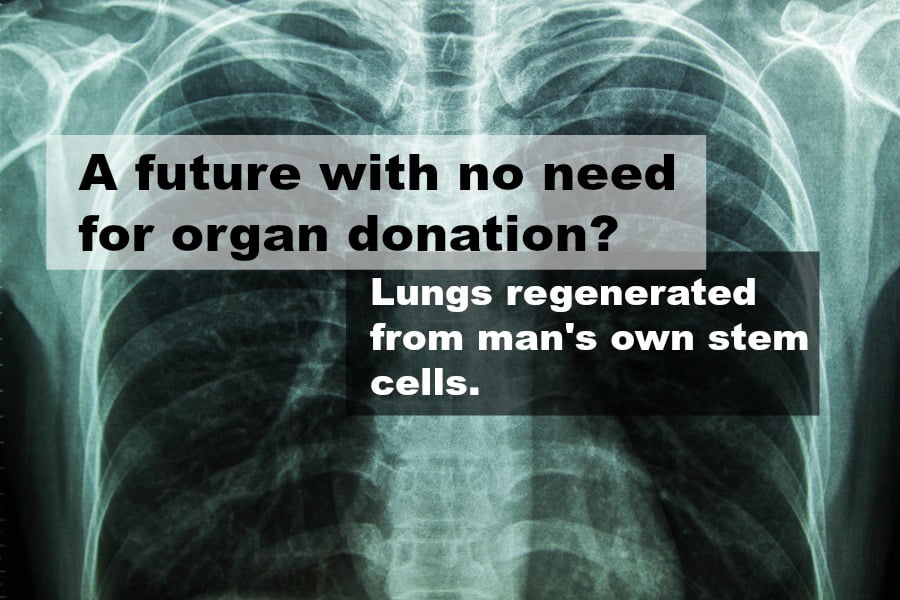 “The research signifies that the revival of human organs has stepped out of the lab and into clinical application.”

For the time being, research has seemingly ebbed from the use of embryonic stem cells. Not only for their controversy but also their expense, difficulty and inconsistent success rate. However, we have within ourselves regenerative stem cells that repair the body and go anywhere they are needed. So they do not have the complications of other cell or transplant therapies. Stem cell therapy is one of the more recent breakthroughs that not only may go down in history, but also has researchers holding the “M”-word on their tongues – miracle.

For most of history, lung disease was a death knell. In an exciting and positive news twist, a man now has a regenerated set of lungs and a new lease on life thanks to stem cell therapy.

Chinese researchers have regenerated human lung tissue in a patient using that patient’s own stem cells, the first time that has been achieved worldwide, said Zuo Wei, lead researcher of the team from the School of Medicine of Tongji University in Shanghai.

After obtaining dozens of stem cells by brushing a patient’s lungs, researchers let the cells multiply into the tens of millions in a lab, then transplanted them into the damaged part of the patient’s lungs.

“The research signifies that the revival of human organs has stepped out of the lab and into clinical application,” said Zhang Jun, Party chief of the school. [emphasis added]

A paper about their study was published on the Protein& Cell website, a Beijing-based international journal, on Jan 17.

Once lung tissues are damaged and develop fibrosis – excessive growth of connective tissue – the disease often continues and cannot be reversed. Traditional medicines only slow down the process of fibrosis, doctors said.

Previous stem cell lab studies on mice with lung fibrosis demonstrated a reversal of the disease with both the mice and their lungs becoming “very healthy” within three weeks. So far, transplanted stem cells cannot repair all damaged tissue, nor are such transplants applicable to every kind of lung disease. Yet, the researchers insist that obvious improvement is plain to see.

Zuo said that “more than 80 patients have been involved in the clinical experiments since April 2016, and all of them showed progress in indicators such as lung capacity and walking distance,” GNN reports.

The repair and substitution for the lesion tissues in lungs are clearly visible through CT scans and they reported less coughing, sputum and shortness of breath.

It will mainly work for lung diseases caused by damaged tissues, such as bronchiectasis, chronic obstructive pulmonary disease and interstitial lung disease. Lung cancer is not included.

Dai Xiaotian, the doctor responsible for the clinical experiments in the research, said that not only will more patients will be recruited this year but that they will also be under long-term observation. The researchers will test kidney and uterus patients with stem cell therapy, too.

At this time, organ donation is obviously still a necessity. But the demand for human organs has created one of the darkest underbellies for both the black market and even within the Western medical system. Not to mention, there is a high rate of rejection and a need for lifelong immuno-suppressing drugs.

This one feat has sparked a glimmer of hope for a future of medical independence and the regeneration of health available within one’s own self. The therapy is still new, but this mode of medicine could only be dreamed about before.

Watch as Mel Gibson explains how his father, Hutton, nearly died at age 92, but opted for stem cell therapy as a last-ditch effort. (His doctor wrote the book: Stem Cell Therapy: A Rising Tide: How Stem Cells Are Disrupting Medicine and Transforming Lives) Mel Gibson’s father will turn age 100 this summer!

This article (Goodbye Organ Donation – Scientists Generated Healthy Lung Tissue From Man’s Own Stem Cells) was created by and appeared first at Natural Blaze. It can be reshared with attribution but MUST include link to homepage, bio, intact links and this message.

Heather Callaghan is an independent researcher, writer, speaker and food freedom activist. She is the Editor and co-founder of NaturalBlaze as well as a certified Self-Referencing IITM Practitioner.