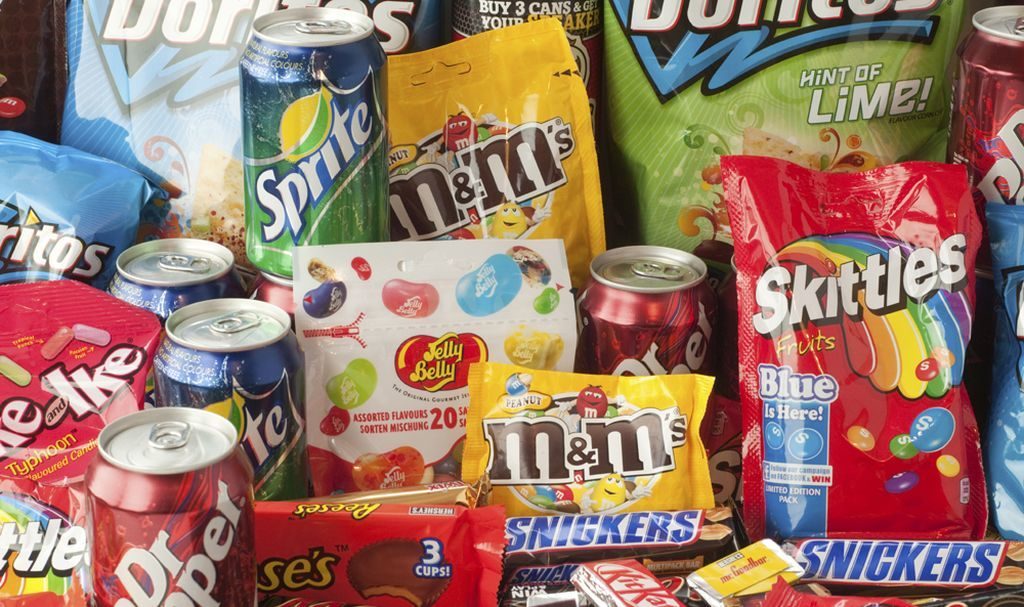 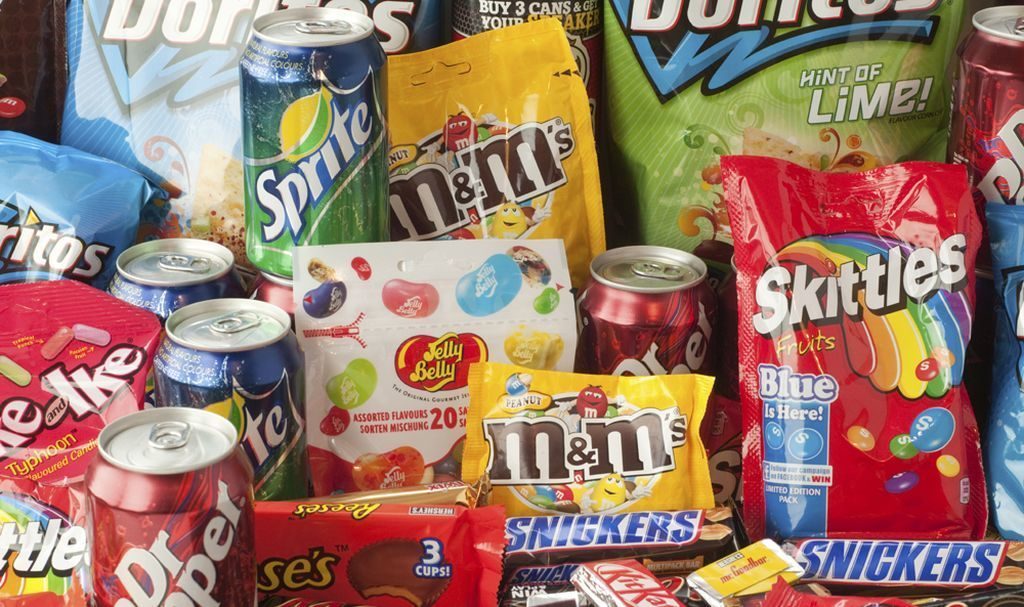 Many different types of stimulants can be found in the foods and drinks we consume.  Some are natural ingredients that we’ve been consuming for millennia, such as caffeine,  now embedded into the cultures of many civilisations. Others are synthetic and a relatively recent addition to our diets.

There is now growing cause for concern about the extent to which food and drink manufacturers are deliberately adding high quantities of stimulants to processed foods and drinks to bolster sales, often under the guise of ‘flavour enhancement’.

As this practice is now so widespread we can easily be exposed to excessive levels of these addictive stimulants through the consumption of a variety of processed foods and drinks.  While this has proved to be an effective tactic for the food industry to drive consumption of their products and ensuring we’re coming back for more (7), a growing number of experts have voiced concerns about the effects that these stimulants have on our health, suggesting plausible short and long-term health consequences that will be discussed in this article (9, 10).

What Are Food Stimulants & How Do We Become Addicted to Them?

Food stimulants are substances found in the food and drinks we consume that increase mental alertness, intensify or prolong physical activity, or even promote aggression (3).  These effects result from stimulants disrupting or modifying the communication that occurs among our neurons by specifically interfering with the dopamine neurotransmitter system (4).
Dopamine is a very important neurochemical, and is believed to have many roles in the nervous system including the control of movement, cognition, motivation, pleasure (particularly for repetitive actions), mood, and the sense of reward following certain activities (5).

When we consume a stimulant, we feel aroused. By hijacking our dopamine system, the stimulant provides us with pleasure and euphoria – which motivates us to consume the same stimulant again in order to experience a repeated feeling of reward (a process known as positive re-enforcement). The flip-side of this, known as negative re-enforcement, is that the abrupt discontinuation of addictive stimulants can result in cravings, which is essentially the feeling of wanting to avoid the discomfort that develops once the artificial high of the stimulant has gone (4). And so, through both of these processes, we are left wanting more.

There are over 70 types of excitotoxins used in foods and drinks, with the most well-known including monosodium glutamate (MSG), saccharin (Sweet’N’Low®) and aspartame (Nutrasweet®, Equal®).  They are frequently added to processed and refined foods as flavour enhancers and artificial sweeteners, however their presence is often masked on food labels where they can appear as derivatives of the original stimulant.

Excitotoxins are an important group of addictive stimulants that not only lead to cravings, but also potentially result in damage of our brain cells through over-stimulation (10).
To date, only studies on animals have conclusively linked excitotoxin exposure to permanent neurological damage (10); however, a reasonable amount of scientific literature has voiced concern that excessive consumption of excitotoxins could potentially cause serious long-term health consequences such as Alzheimer’s disease, Huntington’s disease, Parkinson’s disease, Amyotrophic Lateral Sclerosis, and even early ageing (11).
Studies have also suggested that children are particularly more sensitive to excitotoxin exposure than adults, and excessive consumption during early childhood could potentially result in mild dyslexia, schizophrenia and cerebral palsy (10).

Although there isn’t currently a definitive answer about the harms of excitotoxins on humans, the considerable amount of legitimate concern about excessive consumption definitely warrants further robust research.

Monosodium glutamate (MSG) was first added to foods in 1908, when a Japanese scientist, Ikeda Kikunae, managed to isolate an ingredient in sea kelp that could make bland, nutritious foods taste good (18). Since WWII, the amount of MSG that has been added to foods has doubled every decade (10).

Research in 1957 was the first to link MSG with health issues when two eye doctors noticed that it had destroyed all of the nerve cells in the retinas of their laboratory mice (19). Ten years later, a neuroscientist by the name of Dr John Olney discovered that a single dose of MSG killed the majority of cells in the hypothalamus (a specialised region of the brain) of mice (20).

Today, there is ongoing debate about how much MSG you need to consume in order for it to be considered harmful (34).  Evidence suggests that MSG is likely to be safe when consumed in moderate amounts; however, large doses (over 6 times the average daily intake) may cause short and long-term harm (34).
A condition exists called MSG symptom complex (Chinese restaurant syndrome), which causes people to experience symptoms such as headache, muscle tightness, numbness, tingling, weakness and flushing after consuming large quantities of MSG (one study suggested about 5 grams of MSG could trigger symptoms) (35).
MSG in high doses was also shown to trigger asthma attacks in susceptible individuals (36); however, these findings have not been able to be reproduced in similar studies.

Dr Blaylock argues in his book title ‘Excitotoxins: The Taste that Kills’ that MSG in high doses potentially increases the risk of chronic neurological issues such as Parkinson’s, Alzheimer’s and amytrophic lateral sclerosis through excitotoxicity (10).  More research is needed, however, in order to produce a definitive answer about the long-term health risks of MSG consumption.

Saccharin is 300 times sweeter than sugar, and is used in many processed foods and drinks that are widely consumed, particularly diet soft drinks (21).  It was the first artificial sweetener to be discovered when it was accidentally found by a chemistry research assistant by the name of Constantine Fahlberg in 1879 (19).
In the 1960s, studies were performed which linked the use of saccharin in rats with bladder cancer; findings that prompted the USA’s Food and Drug Administration (FDA) to limit its use, and even try to ban it in 1981.  This resulted in an immediate uproar, however, because at that time, saccharin was the main artificial sweetener in use (19).

Today, aspartame is one of the most popular artificial sweeteners available.  It consists of aspartic acid and phenylalanine, which are both naturally occurring amino acids. Aspartic acid has known excitotoxic properties, while phenylalanine has been shown to potentially result in uncontrolled muscle movements, known as tardive dyskinesia (22).  For people with phenylketonuria (when you have too much phenylalanine in your blood), aspartame can be highly toxic (22).

Artificial sweeteners have been linked with numerous chronic health issues, such as weight gain (30), Type 2 Diabetes (31), and cardiovascular disease, including stroke (32, 33).  There is also evidence that suggests artificial sweeteners, including saccharin and aspartame, functionally change our gut microbiome (26, 27, 28, 29).

Cysteine: Used as an artificial flavouring, cysteine is a naturally occurring protein that is also industrially produced through the hydrolysis of human hair and poultry feathers. It is commonly found in most high-protein foods, but is also added to some processed and refined foods.  Cysteine consumed in moderate amounts has been shown to have numerous positive health benefits; however, excessive cysteine levels have been associated with Parkinson’s and Alzheimer’s disease (23, 24).

Sucralose (Splenda®): Sucralose is an artificial sweetener that is about 320 to 1,000 times sweeter than regular sugar. The potential health consequences of sucralose are less known compared with saccharin and aspartame; however, it has similar excitotoxic properties. Sucralose can be found in many processed foods and drinks that use artificial sweetening (24).