Prepare For Change
Home Awakening ‘No Justice Under Occupation’: Palestinian Teenager Ahed Tamimi Gets 8 Months in... 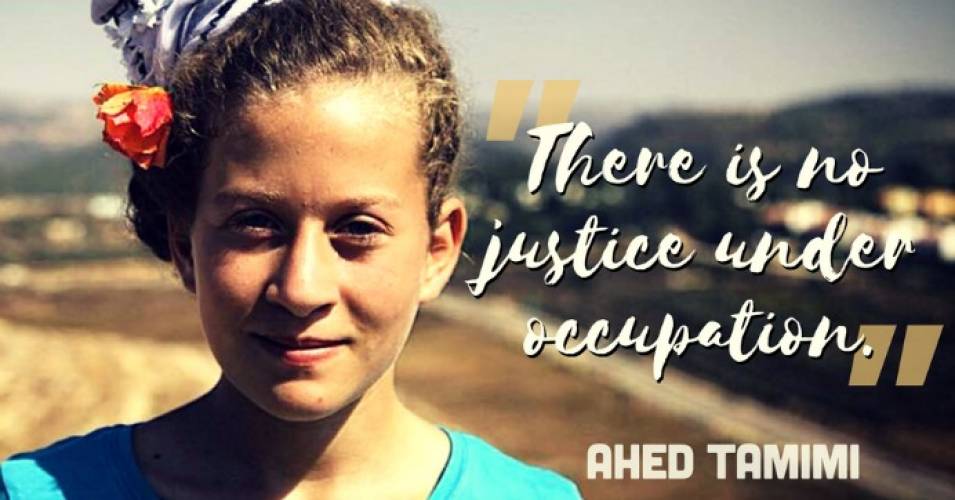 “17-year-old Ahed Tamimi will serve 8 months in jail for slapping a soldier who invaded her home. Meanwhile, IDF soldier Elor Azaria will serve 9 months for executing in cold-blood a wounded Palestinian.”

Ahed Tamimi, the 17-year-old Palestinian girl who was arrested in January for slapping an Israeli soldier, was sentenced Wednesday to eight months behind bars, enraging activists across the world who have advocated for her release.

“There is no justice under occupation.”
—Ahed Tamimi

Tamimi confronted a pair of Israel Defense Forces (IDF) soldiers outside her family home in the occupied West Bank last December just moments after learning a solider had shot her 15-year-old cousin in the face.

Some compared Tamimi’s sentence to that of an IDF soldier who was captured on video in 2016 fatally shooting an injured Palestinian man in what was described by one United Nations expert as an “extrajudicial execution.”

Speaking with reporters after the sentencing on Wednesday, Ahed Tamimi said, “There is no justice under occupation.”

“Ahed Tamimi, a teenage Palestinian girl who slapped a machine gun-toting Israeli soldier that came to her house as part of an occupying army, will spend eight months in Israeli prison for ‘assault,'” Yousef Munayyer, executive director of the U.S. Campaign for Palestinian Rights, told Newsweek.

“At the same time, an Israeli court shortened an already short sentence for Elor Azaria, who executed a prone Palestinian in cold blood, so that he will only serve nine months in prison,” Munayyer noted. “The perverse Israeli legal system, in all its forms, functions to protect abusers as they trample on those who the state looks down upon.”

Several others compared the sentences on social media:

Ahed Tamimi will serve 8 months in jail for slapping a soldier on her property after soldiers shot her cousin in the face.
Elor Azaria, the Israeli soldier who executed a wounded Palestinian, will serve 9 months in jail. pic.twitter.com/vjqFZWEbxA

For some, Tamimi has become the latest symbol of the injustice Palestinians face under Israeli occupation. She was denied bail earlier this year, and will receive credit for the time she was detained during the closed-door trial. The sentence resulted from a plea deal her lawyer reached with the Israeli military court. She pled guilty to four charges.

In additon to the jail time, she will pay a $1,400 fine, according to Haaretz, which reported that “the prosecution also reached plea agreements with Nur and Nariman Tamimi, Ahed Tamimi’s cousin and mother, both of whom were involved in the videotaped slapping of the soldier.”

Sarah Leah Whitson, executive director of the Middle East division of Human Rights Watch, explained that “plea bargains are the norm in Israel’s military justice system, which is characterized by prolonged pretrial detention, abuse of kids and sham trials.”

“Ahed will be home in a few months,” Whitson added, “but Israel is putting this child behind bars for eight months for calling for protests and slapping a soldier, after threatening her with years in jail.”

“The fact that a child will be jailed for 8 months for slapping a soldier whose troops just shot her 15 year old cousin in the face is extreme, but in the context of the 99 percent conviction rate in the Israeli military court system and right-wing incitement against Ahed, this compromise by the Israeli military shows they have decided to back down in the face of growing pressure to release Ahed,” Fadi Quran, a Palestinian activist and senior campaigner with Avaaz, wrote on Medium.


Whitson and Quran both pointed out that the Israeli military detains hundreds of Palestinian children each year.