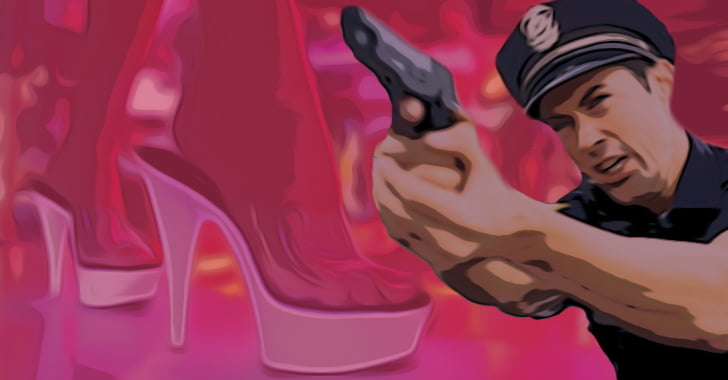 “By demonizing the police,” right-wing commentator Tomi Lahren screeched this week while scolding celebrities for raising awareness about police violence, “you’re putting the communities you claim to care about at risk because it’s our officers who protect those communities and all communities.”

As it turns out, cops are putting communities at risks all by themselves. Here are ten instances just from the last few weeks that show cops are earning their bad reputations:

1. A New Jersey police officer was arrested Friday amid charges of selling narcotics out of his police car. While the entire premise of the drug war and prohibition is highly questionable, so is a sworn officer of “the law” directly breaking it. This is not an uncommon occurrence, as officers around the country have made a habit of dealing substances they throw people behind bars for possessing or selling.

2. Late last week, an LAPD officer was arrested on suspicion of three counts of murder and three counts of gross vehicular manslaughter while intoxicated and drunk driving causing injury after he drove drunk and caused a fiery crash that killed an entire family. This, too, is a pattern among officers, and while this particular officer was fired, some are allowed to return to their jobs despite flagrantly endangering the public.

3. Case in point: an officer in Ralpho Township, PA, is being charged with multiple misdemeanor counts of drunk driving after he operated a motor vehicle while intoxicated. Though he admitted to driving drunk after missing a turn and crashing, he is still on duty as he awaits his trial.

4. Though Tomi Lahren cleverly referred to violent police abuses as “so-called police brutality,” the problem is very real. On Friday, NBC reported that an officer who punched an unarmed man twelve times — simply because he matched the description of armed man — will not face charges. Instead, the victim is being charged with resisting arrest and obstruction.

5. In a more fatal case, earlier this month NYPD officers shot and killed a bipolar man who was holding a pipe, claiming he pointed at them like it was a gun. One member of the community said the mentally ill black man never bothered anyone, and another resident said every cop in the neighborhood knew who he was. Though police apologists may dismiss the shooting by suggesting officers feared for their lives, instances of cops shooting unarmed individuals, often black men, are rampant across the country, including the recent killing of Stephon Clark, who was simply carrying a cell phone.

6. In a different kind of police abuse, taxpayers are footing the bill for a sexual harassment suit brought against an LAPD officer by a former female cop. Following a 12-0 jury verdict, the woman was awarded $3 million after arguing in court that she was not only harassed but also surevilled and fired for reporting her abusive supervisor. The offending officer retired from the department last month.

7. Sexual harassment by cops also takes place outside the department. Last week, a New Jersey State Trooper was indicted for pulling over two women and demanding their phone numbers and pressuring them to date him, threatening to arrest one of the women if she did not comply. He went on to text them, pulling one of them over again to ask if she had been receiving the texts. Other cops around the country have been caught engaging in similar behavior.

8. In a prime example instance of officers attempting to evade accountability for abuses, this month, the Patrolmen’s Benevolent Association won a court battle in New York City, blocking the mayor and NYPD commissioner making the disciplinary records of officers public. The proposed publishing of records did not intend to reveal officers’ names, but the union nevertheless fought to shield officers from responsibility for misconduct.

9. This week, police in Sacramento, CA, arrested a former cop accused of committing 12 murders, 45 rapes and 120 home burglaries in the 1970s and 80s. “Discarded DNA” was allegedly used to identify the “Golden State Killer,” and he is being held without bail.

10. Earlier this month, a former police officer in Athens-Clarke County, GA, was sentenced to 44 years behind bars followed by eleven on probation for sexually abusing underage boys who were under his supervision as cadets. A jury found him guilty of child molestation, enticing a child for indecent purposes, and three counts of violating his oath as a police officer.

Obviously, not all cops sell drugs, sexually harass women, abuse children, and employ excessive force. Nevertheless, these patterns are all too common and undoubtedly demonstrate the need for scrutinizing law enforcement rather than shaming those who are willing to question their authority.