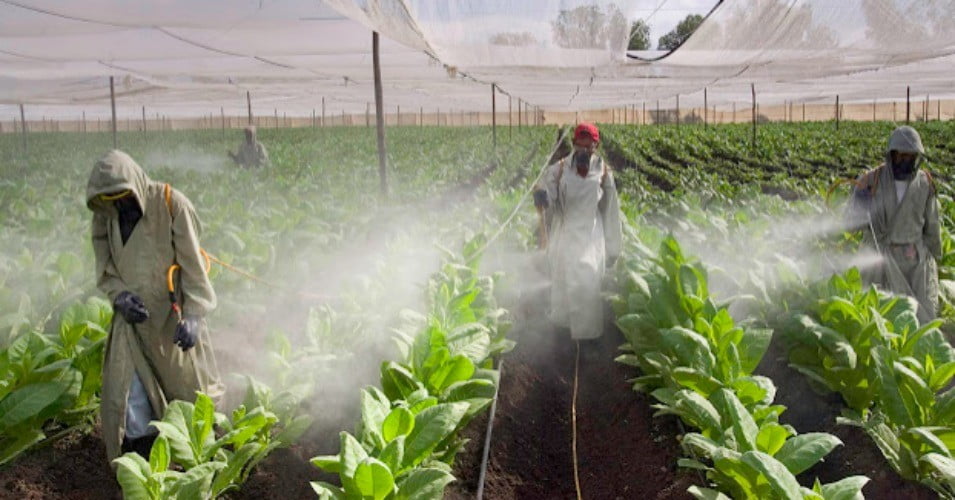 “Pesticides cause a multitude of adverse effects on humans. However, they are especially harmful to children.”

Pesticides cause a multitude of adverse effects  on humans. However, they are especially harmful to children. They may have something to do with the mass-shootings in schools all over America because some of them are neurotoxins. This means they affect and damage the central nervous system and the brain – of all animals, including humans.

Warren Porter, professor emeritus of zoology at the University of Wisconsin, conducted experiments with ground water – water drawn from the ground of farms with typical levels of pesticides and fertilizers. He chose farm water contaminated with the insecticide aldicarb, the herbicide atrazine, and nitrogen fertilizer. He tested that mixture on white mice and deer mice.

The concentrations of the fertilizer with each of the pesticides (aldicarb and atrazine) in the ground water were of the order of magnitude the Environmental Protection Agency says the chemicals cause “no unreasonable harm to man and the environment.” In other words, Porter put to the ultimate test the assurances of EPA and the chemical industry about the toxins EPA registers (approves) – that they are safe and farmers may spray on crops Americans eat.

Porter discovered the mixture of common ground water and farm chemicals had detrimental effects on the animals’ nervous, immune, and endocrine systems. The mice became aggressive and had problems with their thyroid hormones. Their immune system was also compromised in its ability to make antibodies against foreign proteins.

For those who would dismiss these findings because only mice were affected by the toxic farm water, consider the following:

Millions of Americans drink the same ground water mixture that Porter used on the mice. Second, thyroid “disruption in humans,” according to Porter, can have unpleasant consequences with the development of the brain, the growth of our body, and our ability to learn. In addition, harm of the thyroid can have adverse effects on our immune system generating defensive enzymes to protect us from foreign proteins.

Third, thyroid disruption can have destructive effects on amphibians – affecting their metamorphosis and survival.

After five years of experiments, Porter published his findings in 1999. His work is a warning that contaminated drinking water has the potential of muddling or slowing down or, in the worst case, destroying the intelligence and learning of children, while making then aggressive.

This is not entirely a theoretical concern. Another American researcher, professor Elizabeth Guillette of the University of Florida, reached similar conclusions in 1998 about the effects of pesticides on the behavior of Mexican children.

Professor Guillette studied Yaqui children, four to five years old. These children live in the Yaqui Valley of the Sonora state in northwestern Mexico. Agriculture in the Yaqui Valley is industrialized so the use of pesticides, including the DDT-like organochlorines banned in the United States, is heavy. In such an environment, the exposure of children to dozens of different toxins is a documented fact.

Guillette found that those children had weaken stamina; could not catch a ball at a distance of three meters; failed to be fully creative in their play, failed to remember meaningful statements after thirty minutes; roaming aimlessly or swimming in irrigation ditches with very little interaction.

In addition, these children were aggressive. They hit their siblings without reason, becoming easily and visibly angry when their parents asked them to do anything or correct their behavior. Professor Guillette concluded that her study was a mirror for “identifying communities in which [pesticide] contamination is apparently having deleterious effects on children.”

Thus, some of the evidence is in. Pesticides are dangerous to children. Farmers have been spraying their crops for decades. Unless, children eat organic food, there’s no doubt pesticides are having their influences on their behavior. In addition, pesticides sprayed over farms become airborne and circulate all over America and the world.

As professors Porter and Guillette documented, pesticides trigger aggression,especially in children. In 1991, Porter lamented that it is impossible to have a “highly-ordered technological society if we raise a generation of children who are learning disabled and hyperaggressive.”

This does not mean the young murderer in the Miami, Florida high school mayhem of February 14, 2018 committed the atrocity only because he ate food tainted by neurotoxins. Nevertheless, nerve poisons in the food, water and air, even in tiny amounts but over a long period of time, do change human behavior, making people and especially children more violent.

Clearly, pesticides, but particularly neurotoxins, should have no place in a civilized society. We need to ban them as soon as possible. However, with Donald Trump at the White House and Scott Pruitt at the EPA, no such policy is likely. These men work for the chemical industry. Until Americans vote Trump out of office, our best protection is eating organic food.

Organic food means food without farm sprays, sludge, radiation, and genetic engineering. This healthy food is also political food: helping us to fight pollution and control by the agrochemical-industrial-political complex.