Prepare For Change
Home Awakening Makes More Money Happier? Wealth on the whole is an illusion 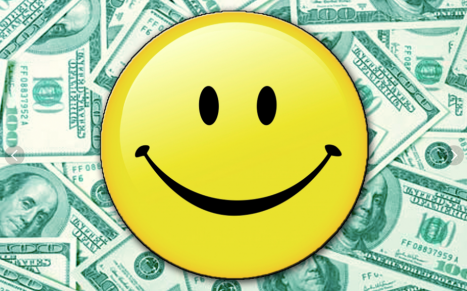 Happiness is independent of Money

Over half the people of the world work just to survive, while the other portion works to get ahead. They aim to get richer. Why so much effort if there is no connection – none at all – to happiness? And why are so many people investing their money, if there’s no assurance that it will contribute in making them wealthier? As there is no link between more money bringing more happiness, could it possibly be the other way around: more money equals less happiness? As actually more money can result in more of the wrong choices!

Growing up during childhood, it was experienced that happiness is independent of wealth. Happiness comes from

the home and the family. As a child, we learn that this is the base to face whatever challenges and hardships may come our way, confident as were that our happiness was safe at home.

If you want to be rich, you’d better learn to like poverty first, as he who has material success may not be able to bear the risk of failure. When young, money really didn’t matter that much as the majority is largely indifferent to it. So, in hindsight this would be the perfect period to take chances. By the same token, this is the best disposition in which to start your own business. It is the best route to success. No matter what it is you undertake, it is very hard to lay your hands on serious money. When you come of age, someone else seems to already own all the money in the world and they will not turn it over to you readily.

Starting out, you don’t know yet what you have to do, to make a success out of your business. More than likely, it will fail, and that’s precisely what you want to avoid at all costs. So, it is of the utmost importance to take advantage of all opportunities, as it is uncertain in the beginning as to what exactly will be successful. Eliminate failures is the only sure route to success. The challenge is to fail early and enough to be vigilant and diligent enough to enforce your nerves and cleverness, learning from your mistakes along the way until you finally stumble onto something that works.

But even if you are able to separate yourself from material success, it still plays a role in life. Most want more wealth for a reason, but most don’t know the reason.

Entrepreneurship means taking risks to obtain something, with the purpose of obtaining satisfaction and delight if success is achieved. It is not necessarily the money that satisfies, it is probably more the satisfaction of choosing the best option available at that time, because life is competitive. People want to win, and money is a way in showing the score.

In a typical job, one is more or less told what to do. One may earn a high salary or a low one for the same job. People may like what they do, or they may suffer on the job, but it will often not provide serious wealth or satisfaction.

Going with the flow while wanting to get the best out of opportunities, one could either focus on disruption, like a disruptive technology, or one could change the way money is earned, and spent, by altering the capital landscape. If you are to get more, others will relatively get less. Which gives the competitive money-maker a deep sense of reward, even before he is successful. You may not necessarily be the richest man, but probably the happiest because of an accomplished goal.

Earning Money is difficult, keeping it is even more difficult

Earning money may be difficult, but keeping it is even more difficult, there are always people around that want to help you lose it. The whole money system is volatile. There are too many counting on calm, sunny weather, and a longer growing season for their money. Everyone invests in stocks, hoping to beat the market, but they don’t realise

they are the market, only a few are able to beat it, most of the time by accident. Of course, US-stock market participants were happy when the market went up, and hit new records, they are hoping for even more success in the future. The question is whether they gained real wealth?

From whom are they gaining, or to put it simple, who is at the other side of the trade? The economy expanded at 2% per annum, that created over the last seven years a grand total of approx. $350 billion in extra wealth to divvy up. But, how is it possible that stockholders can obtain ten times as much as the amount of wealth that the economy creates? In actual fact, the mystery is far more complex than that.

Since the ravage of the financial crisis of 2008, household wealth has gone up by $21 trillion. It has gone roughly from $50 trillion to $71 trillion. During that same time, real household earnings for the typical family have gone down. Wages have gone down. And the net worth of the typical family has also declined. Growth rates have declined and the number of people with jobs has proportionately declined.

Real GDP is only about 6% higher than it was in 2007. Although, household wealth has gone up nearly 20 times faster than GDP since 2008. How could that be? The Central Banks increase the real estate and asset prices. This wealth effect added $21 trillion to the nation’s balance sheets. This was supposed to increase demand, which would lead to more spending and investment.

But should it not be that a nation should first produce before it spends? There is somehow approximately $20 trillion in excess spending power that seems to have come from nowhere. How could that be?

Wealth is either physical, such as the ownership of a house or a Picasso painting, or it is paper wealth. But there is

$21 trillion of real output and real wealth. If there is no increase in real wealth, that money just competes for the same quantity of goods and services that were already priced at $50 trillion, five years ago. In other words, the nation has not become wealthier. This is exactly the problem with paper assets.

So, when will the economy produce $21 trillion of new wealth so that these new claims can be realised? “annual US gross domestic product growth has averaged less than 1.8%.” That’s about $300 billion. Let’s see, how long do you have to wait – at $300 billion a year – to cover $21 trillion in claims? – The answer is 70 years!

Well, that’s not going to happen, is it? Long before 2088 rolls around, those claims will be marked down and written off. In other words, the additional wealth is mostly an illusion.

Real money must be earned

Real money is different from debt money. It doesn’t need to explain itself. It doesn’t need to state where it’s been or what it’s been up to. Take a gold coin as it is. No backstory or balance sheet is necessary. That’s the way real money works: It closes transactions. You accept payment and the account is settled.

But debt money is different. It comes with question marks: Who issued this debt? What is it really worth? Will I get paid? Here is the key to understanding debt money, as opposed to real money:

As the quantity of real money increases, a society becomes richer and more financially stable. Because it’s real wealth. But as the supply of debt money increases, more people owe more money; the economy becomes more fragile, and eventually goes broke. But if the authorities want to increase the supply of money, the only kind of money supply they can increase is the fake kind. Real money must be earned; like wealth, it cannot be printed.

Our world is plagued by dishonesty, unfairness, and wholesale rejection of the truth; the founding principle of life. In our world today ‘Might is Right’, it’s the order of the day; lawlessness; where the law of the jungle and survival of the “fittest” are the primary criteria for oppression and success. And yet, despite the poverty stricken status of the human realms of trust, there is nothing stopping us from turning the ship of civilisation around and righting our course toward prosperity and abundance.

All the money in the world can’t solve the core problem humanity faces; the destruction of social trust and the capacity for individuals to restore the greater human family.

Suppressed technology is ‘New’ to us, but very ‘Old’ to Beings from other planets, some of it going back millions of years.

Money and banks are tools of the cabal to control us with their debt-based economy which can never prosper. So, ‘Paper Money’ and banks will eventually disappear, but ‘Coinage’ will not.

The future will be unbelievably complete with Cards for our own Personal Credit. We will join ‘The Alliance’ and then we will live among races from other worlds and trade with them, which purportedly the secret space program has been doing for decades. We will eventually travel to other planets, inhabited with human or alien life; a very likely and realistic possibility.

The reason why the global economy is so depressed is that money has been stolen from us on a truly outrageous scale. Evidently, a tremendous amount of money is missing, which didn’t just vanish. It all went somewhere. The disappeared volumes are immensely greater than any luxuries the “one percent” could ever possibly afford.

These missing quadrillions will be re-introduced into the economy by the Alliance, which is still a small figure compared to the total amount of theft that has taken place. Top insiders reveal that much of our money has been spent on the development of a vast amount of high-tech infrastructure in underground and off-world bases, as well in the know-how and facilities to make it all possible.