Prepare For Change
Home Awakening Pomegranate can prevent the growth and spread of four common types of... 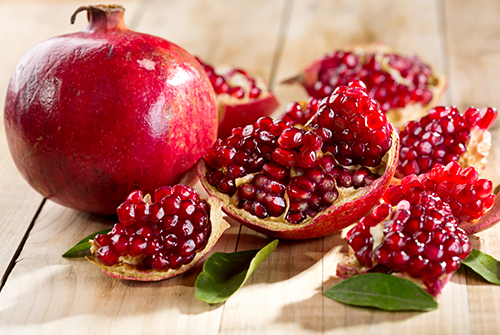 According to U.S. Centers for Disease Control and Prevention (CDC): “we expect the number of new cancer cases in the United States to go up about 24% in men to more than 1 million cases per year, and by about 21% in women to more than 900,000 cases per year.”  These grim statistics underscore the need for non-toxic, novel methods of treating this potentially deadly disease – and the consumption of pomegranate is showing real promise.

The vivid scarlet color of pomegranate pulp and seeds is testament to the fruit’s extraordinary concentrations of antioxidant polyphenols – beneficial plant compounds that can fight oxidative stress.

And – while more research is needed – preliminary studies show that pomegranate extracts and juices have multiple actions against cancer cells, without harming normal cells. To learn more about the cancer-fighting benefits of this amazing fruit, keep reading.

Pomegranate extracts offer powerful protection against the DNA mutations that can set the stage for cancer. Research shows that pomegranate helps to unleash a cancer-fighting protective enzyme called paraoxonase-1, or PON-1 – which blocks the oxidative stress and inflammation that can contribute to mutations. (In fact, studies have shown that people with cancer have low levels of PON-1).

But, pomegranate’s protective powers don’t stop there.  If a DNA mutation does occur, pomegranate seems to offer a “Plan B” for that contingency.

Research has shown that pomegranate extracts can interfere with the cancer cell replication cycle, cause apoptosis – or programmed cell death – in mutated cells, and inhibit angiogenesis – the growth of blood vessels that support and nourish tumors.

And, if a malignant mass does develop, pomegranate extracts seem to be able to interfere with its invasion into local tissues, and to help prevent it from metastasizing to more remote locations in the body.

In addition, pomegranate fights cancer-promoting inflammation. In one study, a cup of day of pomegranate juice lowered inflammatory markers – such as C-reactive protein and interleukin-6 – in diabetic patients.

Clearly, pomegranate is a valuable tool for cancer prevention. Let’s take a closer look at how it targets specific forms of the disease.

The PSA doubling rate (an indication of how fast the cancer is developing) was slowed by a third – from 11.9 months to 18.5 months – with no clinically significant toxicities.

An additional study, published in 2006 in Clinical Cancer Research, showed that pomegranate juice not only drastically slowed the PSA doubling rate (from 15 months to 54 months), but caused a 17 percent increase in apoptosis and a 12 percent decrease in cell proliferation.

In one study, pomegranate peel and seed extract inhibited the growth of breast cancer cells by more than 80 percent. Intriguingly, researchers found that a pomegranate polyphenol inhibited the enzymes that convert less active forms of estrogen into cancer-promoting estrogen molecules.

In animal studies, pomegranate extracts reduced the number of lung cancer tumors by as much as two-thirds.

The researchers noted that the extracts inhibited migration, invasion, and cell proliferation in non-small cell lung cancer.  The extracts also suppressed levels of matrix metalloproteinase, or MMP – an enzyme which facilitates the ability of cancer cells to invade healthy tissue by breaking down the matrix between the cells.

The team lauded pomegranate’s potential as an “effective and safe chemotherapeutic agent” against non-small cell lung carcinoma.  Pomegranate also has been shown to significantly reduce both the volume and quantity of colorectal tumors.

Finally, in a recently-published article in Oncological Review, the authors noted the “excellent evidence relevant to the anticancer, anti-inflammatory and anti-proliferative activities of pomegranate-derived products.”

Pomegranate extracts are available in powdered and capsule form, with natural health experts typically recommending 500 mg one to three times a day. Consult your integrative doctor to determine a dosage that is right for you.

Refreshing, colorful and tangy, pomegranate and pomegranate juice is not only delicious – but a valuable weapon against cancer.