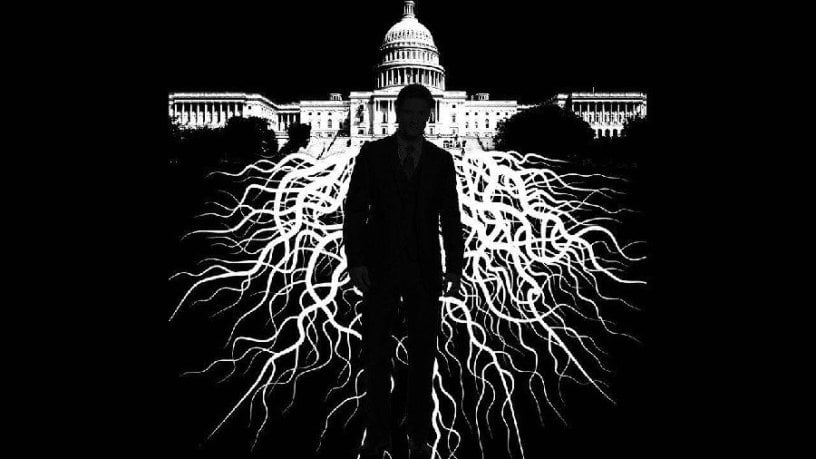 In 2018, an old generation of people who really should remember the power players from several decades ago are in the same realm of ignorance as the younger generations who had never heard of them.

For the past 54 years at least, and even a little bit before, one man has been in a position of power to perfectly demonstrate why left and right are irrelevant: Henry Kissinger.

From his actions in aiding the execution of civilians in Chile, to his support of other genocidal dictators for his own team’s political interests, demonstrating the immorality of Henry Kissinger is not difficult.

People often try to persuade others to wake up to the fact that the left-right paradigm is a false representation of the way power really works, but most people who aren’t inclined to care, won’t. This is a special kind of evidence, so powerful it just might be enough to persuade skeptics that left and right are irrelevant.

So when you try to show someone on the fence that left and right are an illusion, show them this. For the past 54 years, Henry Kissinger has advised and influenced the past 10 presidents. He’s actually a protege of David Rockefeller, and helped David Rockefeller’s brother Nelson become Vice President under the administration of Gerald Ford.

He essentially serves as a middleman, from a higher level of power to the politicians who carry out the orders of the ultra-powerful and ultra-rich.

It was said that the last president to not be photographed with Kissinger was John F. Kennedy, but some evidence even suggests Kissinger had an influence at that time. Take a look at Henry Kissinger with every last US president for the past 54 years.

A brief period of time after becoming president, Trump met with Kissinger. They meet frequently, the last one was just a couple weeks ago. A couple years ago, the administration of Barack Obama awarded Kissinger with a distinguished honor. They hav met on multiple occasions, and the mainstream sometimes even recognizes how odd this is. According to the Daily Kos:

“If you measure “public service” as being responsible for more deaths than any other living American in the effort to spread the influence of American empire over the globe, Kissinger was surely deserving.

It is not news that Kissinger has been embraced by this White House. The Obama administration use of this criminal has been open since the first days of the Obama presidency. The Kissinger issue, if I may call it that, surfaced again during the Clinton-Sanders debates, when Sanders decried Clinton’s reliance on the advice and counseling of Kissinger.” Both George Bush and his father were close to Kissinger naturally, and all of them are members of the Bohemian Club at the occult Bohemian Grove. After 9/11, who did they appoint to the 9/11 Commission Report to “investigate” it? Henry Kissinger was hired to investigate 9/11 by Bush, Both Bill and Hillary Clinton continue to be strangely close with Henry Kissinger, and it was the same during Bill’s administration. Financial ties in specific can be found between the two men. According to Wikipedia:

“In 1982, with the help of a loan from the international banking firm of E.M. Warburg, Pincus and Company, Kissinger founded a consulting firm, Kissinger Associates, and is a partner in affiliate Kissinger McLarty Associates with Mack McLarty, former chief of staff to President Bill Clinton. He also serves on the board of directors of Hollinger International, a Chicago-based newspaper group, and as of March 1999, was a director of Gulfstream Aerospace.” An incredibly numerous amount of photos from recent years can be found with George H.W. Bush and Henry Kissinger, despite Bush making a few headlines lightly criticizing Kissinger. Both of them are members of the Council on Foreign Relations. Kissinger’s influence was certainly felt in Bush’s administration. In this photograph, one can see a very intimate meeting between Henry Kissinger and Ronald Reagan, in Reagan’s own residence. During the 1980’s, Kissinger was a consultant for Goldman Sachs and a financial power player reaping the benefits of his political moves from before. During this time, Reagan appointedHenry Kissinger as a member of the President’s Foreign Intelligence Advisory Board. Kissinger was quietly building up his power even further during all this in the 1980’s. According toDemocratic Underground:

“Kissinger founded the New York-based consulting firm Kissinger Associates in 1982, a year before accepting the position as head of the National Bipartisan Commission on Central America. And, beginning in 1986, Kissinger Associates became entangled with the infamous Bank of Credit and Commerce International (BCCI).

BCCI was a Pakistani-managed, Middle East-financed bank with branches in 70 countries. In a nutshell, BCCI’s purpose was “stealing very large amounts of money and using it for a multitude of illegal purposes, perverting governments, corrupting politicians, corrupting regulators, corrupting bank regulators,” according to Wall Street Journal reporter Peter Truell.

Articles were written about this president’s communication with Kissinger even before he became president. According to a 1976 New York Times article:

A. Kissinger. to emphasize his News promise of an open Analysis administration, Mr. Carter moved step closer to making the Secretary a campaign issue. Without citing Mr. Kissinger by name, he referred to a “secretive ‘Lone Range:’ foreign policy.””

Kissinger sort of disrespected Carter in particular, and we can clearly see here who is boss. After the administration of Richard Nixon started to crumble, Gerald Ford became president. Kissinger was of course the Secretary of State during Nixon’s administration.

Guess who got in as Vice President after Gerald got in, and Nixon got out? A well connected, powerful Rockefeller named Nelson Rockefeller. He was David Rockefeller’s brother.

Kissinger always represented the Rockefeller agenda in his moves, and way back in the mid 1970’s, he got the brother of David Rockefeller in as the Vice President of the United States. Being his Secretary of State, it’s obvious that Kissinger would be photographed with Nixon. What people may not know, is some of the atrocious things that happened as a result of Kissinger’s decisions. According to Democratic Underground:

“However, let’s not forget that Kissinger and Nixon were responsible for widening the Vietnam War into Cambodia.

Let’s not forget the covert actions that led to the overthrow of socialist President Salvador Allende of Chile and the ascension of the oppressive Augusto Pinochet.

Let’s not forget East Timor. During a state visit to Jakarta in 1975, Kissinger gave a “green light” to the Indonesian dictator Suharto to invade East Timor. Less than a day after Kissinger and President Gerald Ford left Jakarta, Suharto’s troops began their assault. According to Christopher Hitchens, a quarter of a million Timorese died as a result of the occupation by Indonesia.

Kissinger left government service at the end of the Ford Administration, but was called upon by Ronald Reagan in 1983 to head the National Bipartisan Commission on Central America, just in time for the Iran-Contra scheme. From 1984-1990 he served as a member of the President’s Foreign Intelligence Advisory Board.” 10. KISSINGER WITH LYNDON B. JOHNSON

When John F. Kennedy was assassinated, who immediately became president and held that position until nearly the end of the 1960’s? Lyndon B. Johnson, who opened the gates for Kissinger to enter the political arena. This is the type of man who Henry Kissinger truly worked for. He got David’s brother Nelson in as Vice President (or at least had a significant influence on that), and he has been tapped into the agenda of these people for his entire life following that era. In conclusion, always remember to look for the higher echelons of power, beyond the fake left-right paradigm.

They claim Henry Kissinger is a Republican, yet he’s close enough with Hillary Clinton to, insert metaphor here: the point is, don’t trust the left or the right and look higher up the ladder. You’ll find people like this, and they are tapped into people who prefer to stay out of the public spotlight.